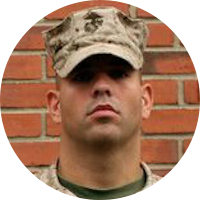 Sergeant Michael Politowicz grew up in Detroit, Michigan. He has served with Combat Engineers Battalion, Wounded Warrior Battalion-East, and now continues his military career with the United States Marine Corps Forces Special Operations Command (MARSOC).  On January 7, 2013 he began an internship with MARSOC.  In March, he was placed back on full duty from a 3rd period of limited duty, all the while participating in numerous events for various non-profits and supporting his brothers and sisters in similar situations.

He has been riding from a young age and turned to racing because he couldn’t run when he returned from Afghanistan. With the help of The Bicycle Shop and Jack Kane Custom Bicycles, he has learned with better components and carbon frames come improved efficiency and less joint and body fatigue.

His first triathlon was in Corolla, North Carolina. He finished his first athletic endeavor since being wounded in 1:00:56, placing fifth out of 35 competitors. Since then, he’s competed in multiple challenges such as a 5k for the Patriot Charities, local races, the Marine Corps Marathon, and the Warrior Games.