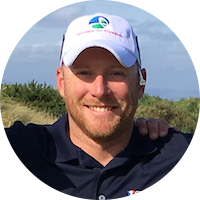 Captain Matt Anderson was injured on October 16, 2010 in the Kandahar Province of Afghanistan.  During a night time combat patrol, while clearing a Taliban controlled compound in the Arghandab River Valley, his right foot and lower leg was shattered by an anti-personnel land mine.  The blast resulted in 24 surgeries and procedures to salvage his leg and two years of physical therapy.

Aside from the physical injuries, Anderson’s biggest hurdle was the mental battle he was going through. He was angry and depressed that he wasn’t in Afghanistan with his men and doing what he was trained to do.  This also fueled his desire to rehabilitate as quickly as he could and work hard in physical therapy to get back to the fight.

In 2011, during Anderson’s rehabilitation, he was asked to serve on the Peer Reviewed Orthopedic Research Program (PRORP) as an advocate for current and future wounded service members.  PRORP focuses on improving the outcomes of blast and battlefield trauma by investing Congressional funding into cutting edge research in nerve regeneration, novel prosthetics, prevention of heterotopic ossification, joint surface repair, and improved physical therapy among many others.  Anderson’s continue to serve on this board.

For Anderson, it has been an honor and privilege to have played and caddied in the Bush Center’s Warrior Open.  The actual competitive event is amazing, but the bonds formed between the warfighters are unquestionable and lasting.  Golf is Anderson’s favorite outlet.  It is his version of mental and physical therapy as well as a means to be outside with friends, his family, or myself.  Anderson’s involvment with the Salute Military Golf Association (SMGA) has allowed him to volunteer, mentor, and introduce other warfighters to the game of golf.  In August of 2016, Anderson was elected to serve on the Board of Directors for the SMGA.

The camaraderie between the Team 43 alumni is very open and easy.  In many cases it has added purpose, a new mission, and support during the transition from military to civilian life.  The Team has been challenged to promote civility, develop young leaders, and make a positive impact within our communities.  Anderson accepts the challenge.