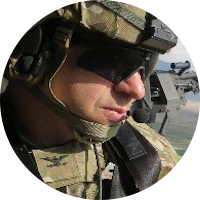 Colonel Marc Hoffmeister has served our nation for nearly 30 years, having commanded at all levels through Brigade, most recently commanding the 20th Engineer Brigade (Combat) at Fort Bragg, NC and continuing to serve as a senior leader in the U.S. Army Engineer Regiment.

Seven months into his second deployment to Iraq in 2007, Hoffmeister was wounded by a roadside bomb in Iraq. An improvised explosive device (IED) hit his Humvee during a combat patrol and he lost partial use of his left arm and hand when five inches of his ulna nerve were severed, destroying the bones in his elbow and forearm, and inflicting a significant traumatic brain injury (TBI).

In 2011, Hoffmeister was selected to join Team 43 during the first Warrior 100K Mountain Bike Ride and continues to support President Bush’s vision of aiding his fellow wounded warriors.

In 2015, Hoffmeister raced in the Boston Marathon on the 8th anniversary of his injury and on his ‘Alive’ day, representing the George W. Bush Institute's Military Service Initiative and in partnership with the Energi Marathon Team to empower military service veterans. An avid competitor and fitness professional, Hoffmeister has completed seven marathons, two full distance Ironman events, raced the Leadville 100 MTB race twice, Eco Challenge Fiji, and the toughest mountain bike race on the planet’ La Ruta de los Conquistadors among many other athletic achievements.  Hoffmeister is a certified running coach, Pose running technique specialist and an NSCA Tactical Strength and Conditioning Facilitator.

Hoffmeister has also tied for the honor of National Geographic magazine's Reader's Choice Adventurer of the Year Award. Not only did he reach the summit of Mount McKinley, he and his, Gayle, wife organized a mountaineering team that included four wounded veterans to accompany him in the challenge.

In his off-time, Hoffmeister and Gayle combined their passions of mountaineering and assisting those in need, summiting Mount Kilimanjaro in Tanzania and organizing and leading an expedition on Cerro Aconcagua in Argentina to support the Tragedy Assistance Program for Survivors in their mission to enable the families of our fallen Heroes. His personal goal is to pay it forward by teaching and sharing the benefits of a culture of fitness and continue to assist and motivate those who’ve served and sacrificed, be they veterans or family members, to better themselves by pursuing their passions.