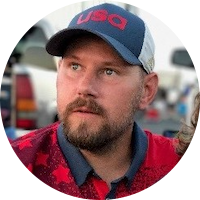 Specialist Lee Sage joined the U.S. Army on May 4th of 2010 as an Infantryman.  He was stationed at Schofield Barracks, HI.  In March 2011, Sage deployed to Kunar Province, Afghanistan.  On May 8, 2011 during mid-day, their Combat-Out-Post came under attack from small arms fire.  At the beginning of the fire fight, Sage was shot by a sniper with a 7.62mm x 54mm round to the gut.  The round went through his stomach, intestines, shattered his sacrum and exited out of Sage’s gluteus maximus.

Sage was medevac’d to F.O.B. (Forward Operating Base) Bostick for emergency surgery.  Over the next five days, he was transported to Jalalabad, Bagram Airfield, Germany, and then to BAMC (Brooke Army Medical Center) in San Antonio, TX.  Sage spent the next 2 months in the hospital in the ICU and 4west.  For the first three to four weeks, Sage was paralyzed from the waist down.  He had a total of nine surgeries ranging from abdomen wash outs to disk replacement and a fusion in his back.  Sage spent the next year and a half to two years at Fort Sam Houston in San Antonio, TX rehabbing.  In March of 2013, Sage was medically retired from the Army.

After retirement, Sage has helped combat injured veterans and veterans alike deal with many of the problems that face the veteran community.  From combat related injuries to suicide and many more.  Being involved in different nonprofit organizations that support the military community has not only been satisfying, but has given Sage back what was missing went he left the military - Brotherhood.

In 2017, Sage started coaching baseball for boys ranging in age from 10-14.  He grew up playing baseball and being able to pass on to kids what he learned from the game and life is very rewarding.  The two main points that he teaches and works to to instill into the kids is respect and not be lazy with anything they do.

Sage feels it is an honor to be a part of Team 43 and to have been included in President George W. Bush’s book, Portraits of Courage.  Having a portrait painted by President Bush is something Sage will cherish for the rest of his life.  He is grateful to President Bush for all he’s done for this country and the men and women of the Armed Forces!!