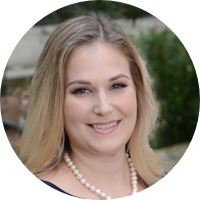 Previously, she served as the Director of the Presidential Leadership Scholars program. Her responsibilities included overseeing the day-to-day operations of the program, including scholar logistics, program components, and developing strategies for the long-term success of PLS.  Prior to serving in this capacity, Ms. King served as the Director of Events, most notably leading the planning and execution of the Dedication of the George W. Bush Presidential Center in April 2013. The event welcomed nearly 10,000 guests, including current and former world leaders, elected officials, and every living U.S. President.

Before joining the George W. Bush Presidential Center, Ms. King served as the Director of Operations and Board Relations for the National Park Foundation in Washington, D.C.

Ms. King served as the White House Deputy Director of Advance for Mrs. Laura Bush. In this role, she was responsible for more than 700 events attended by Mrs. Bush both domestically and in more than 30 foreign countries. She served as the chief liaison to the United States Secret Service, the White House Military Office, Congressional Offices, Federal Agencies, U.S. Embassies, and Foreign Governments regarding the logistics of Mrs. Bush’s activities.

Ms. King graduated with a bachelor’s degree in government from Manhattan College and is originally from New York.