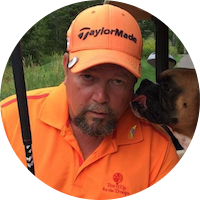 Petty Officer First Class Kenneth Hendrickson retired from the United States Navy after nearly 19 years of service. On June 05, 2006, while serving in Iraq’s Al Anbar region as the gunner in a convoy security team, Hendrickson’s vehicle struck an IED that housed five 155MM artillery shells.  The explosion was so violent that it ripped the Humvee to shreds and sent Hendrickson 35-feet in the air and approximately 80 to 100 yards away.

After exploratory surgery in Iraq, Kendrickson was immediately airlifted to Germany where he was given a blood transfusion. One of the blood types was incorrect and resulted in jaundice and caused his organs to begin shutting down.  Hendrickson was airlifted to Bethesda Naval Hospital where he remained in ICU for two weeks.  He has had more than 15 surgeries to date, including reconstructive knee surgery and a tendon transfer in the right foot to help counter foot drop.  Hendrickson uses golf as his physical and mental rehabilitation.

Hendrickson was medically retired from service and permanently retired from his occupation as a maintenance technician at a production facility due to pain and physical limitations. Currently, he is an Ambassador for Tee It Up for the Troops and supports other golf organizations such as Team 43, Veterans Golf Association, Salute to Military Golf Association, and Military Warriors Support Foundation.

Hendrickson is a member at Medina Country Club, and Cannon Falls Golf Club in his home state of Minnesota. Ken is a 3-year Trustee and life member of VFW post 246, American Legion, Lifetime Member of Military order of Purple Hearts, and Sons of the American Legion.