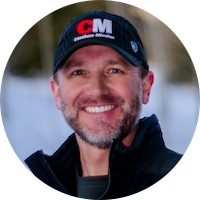 Sergeant Joshua Hansen served in Iraq as an IED Hunter (route clearance) in support of the 5th Marine Regiment, 1st Marine Expeditionary Forces in and around Fallujah, Iraq. His vehicle sustained eight direct hits by IEDs which caused multiple injuries over a seven month time frame. He was medevac’d out of Iraq on March 15, 2007.

Hansen lost six great men in combat before returning home for a challenging healing process. He was diagnosed with traumatic brain injury (TBI) and post-traumatic stress (PTS) and suffered from neck and back pain, migraine headaches, etc. Hansen, with the never-ending support of his wife, Melissa, spent years recovering from his injuries.

Hansen was officially retired from the Army on March 13, 2010, but he is still working to overcome the challenges presented to him as a result of his service to the country. Hansen was subsequently awarded the Bronze Star Medal on May 16, 2013.

After being invited to the W100K with President Bush in 2014, which had been very healing and motivated him to continue serving his country and veterans, Hansen co-founded Continue Mission (CM), a 501(c) (3) non-profit organization serving veterans with service connected physical, mental, and emotional injuries. When Hansen lost four of his men to suicide, he decided it was his duty to help veterans here at home. He made it his goal to help other veterans find the road to recovery so that they could start to enjoy life again. In less than two years of opening their doors, Continue Mission has had a positive impact on those who have had suicidal thoughts or who were struggling because of their participation in CM.

Hansen and his wife, Melissa, have been married since 1994. After years of being foster parents, they adopted three wonderful children. Their oldest daughter is now in the Army Reserves.