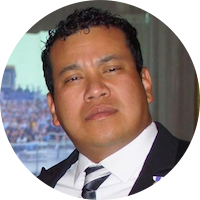 Corporal Joseph Garrido enlisted in the United States Marine Corps on November 3, 2004, when he was 25 years old.  It was the day after he voted for George W. Bush, his first time voting.  In Garrido’s five years of service he deployed twice, once in 2006 and the second a year later.

In 2006, Garrido was deployed to Cyprus to help evacuate Lebanese Americans from their country when it was being bombed by Israeli Forces.  In 2007, after only three days in Iraq he was shot by an insurgent sniper while posting security on top of an Iraqi police building.  Garrido was evacuated and sent to an Army hospital in Al Asad, Iraq. After his recovery, the Marine Corps allowed him to finish the deployment with his battalion.

After his honorable discharge, Garrido received an Associate of Arts Degree from Pasco-Hernando Community College (PHCC).  He also received a Bachelor of Arts Degree in Communication Sciences and Disorders (CSD) from the University of South Florida (USF) in 2014 with the hopes of being a speech therapist or audiologist.  That same year Garrido met a fellow Purple Heart veteran who introduced him to a wounded veterans’ organization and the game of golf.  He quickly became hooked on the game.

Golf couldn’t have come at a better time.  Garrido was neither accepted to graduate school for audiology nor speech therapy for two years in a row.  With that frustration, his post-traumatic stress (PTS), and relationship difficulties, golf and fellow veterans were life savers.  The phrase, “An idle mind is the devil’s playground,” is true for a lot of veterans’ lives (including for Garrido).  This is why Garrido works hard to get others veterans involved in golf and out of the house and join the Veterans Affairs (VA) Adaptive Sports golf clinics at Terrace Hill Golf Club every Friday in Tampa, FL.

Garrido was able to experience playing golf in many places and has met a lot law students and several attorneys from all different fields.  These interactions have encouraged him to pursue a different path in life.  Garrido is currently studying for the Law School Admissions Test (LSAT) with hopes of getting into law school.  Until that day, if he’s not studying for the LSAT or working at his job as a security officer at the Seminole Hard Rock Hotel & Casino in Tampa, he is out playing golf with his fellow veterans.