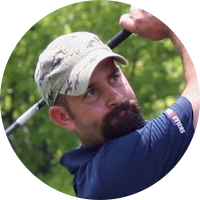 Sergeant First Class John Faulkenberry joined the U.S. Army after graduating from Midland High School.  He was stationed in Darmstadt, Germany for five years and deployed to Iraq twice.  In 2007, he deployed to Afghanistan with the 173rd Airborne Brigade Combat Team.

On July 27, 2007, outside a small village in the Korengal Valley, Faulkenberry’s unit was ambushed from both sides of a river.  During the ambush, Faulkenberry was shot multiple times in the right upper thigh where it shattered three inches out of his femur, completely severed his sciatic nerve, lacerated his femoral artery, and blew out most of his quad and hamstring.  He underwent a limb salvage for almost three painful years, ultimately leading to a below the knee amputation.  Faulkenberry spent 10 months at Walter Reed undergoing surgeries and therapy then transferred to Brooke Army Medical Center where he finished his recovery.

Faulkenberry medically retired from active duty in 2012.  He graduated from Texas State University completing a degree in Exercise and Sports Science.  He used his education and passion for helping fellow veterans while working at the Center For The Intrepid as a prosthetic technician,  He then began working for Military Warriors Support Foundation running a program called Skills4Life where he provided a mentorship program in order to help our nation’s combat wounded veterans and Goldstar Families transition from military to civilian life.  Faulkenberry currently works for NALCO-Champion supplying oilfield chemicals to the busy fracturing companies in South Texas.  He is married to his wife Sarah and they have a beautiful daughter Haley, and a very active boy, Jake.