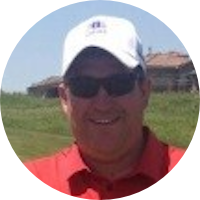 Sergeant First Class Jeremy Henderson joined the United States Army at the age of 18 and served as an Infantry Mortar Man. His first duty station was in Vilseck, Germany where he served seven years. During those seven years, Henderson was deployed to Bosnia in early 1996 and then again in 1997. In 2003, he was stationed in Korea and a year later Henderson was deployed to Habbaniya, Iraq, just outside of Fallujah. He was attached to the First Marine Division in support of OIF II.

In 2007, Henderson redeployed in 2007 to Iraq. It was during his second deployment to Iraq when he was severely injured. On April 15, he was medivac to BAMC in San Antonio, Texas. After a long recovery process and 17 years of service, Henderson was retired from the Army.

Henderson had always loved the game of golf, so as part of his recovery, he started playing again from an adaptive cart. After a couple of years he was stable enough to golf without the cart and began playing more and more. In 2015, Henderson was selected to play in the Bush Center Warrior Open, which changed many things for him. It is an honor to be a member of Team 43, it offers great networking opportunities, resources, and the friendships and bonds that Henderson has forged with other Team 43 Warriors is like no other.

Currently, Henderson resides in Colorado with his lovely wife of ten years, Tina. They enjoy golfing, traveling and spending time without grandkids. In 2016, Henderson made his first Hole-in-One at the Blackstone Country Club in Colorado.