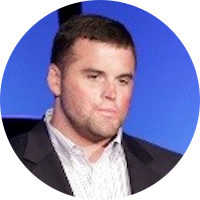 Captain James Barclay’s military career began with an ROTC scholarship to North Georgia College.  He graduated in 2004 and was commissioned as an Army Infantry Officer, and completed Ranger and Airborne School.  In February 2006, Barclay deployed to Afghanistan as the Platoon Leader.

On August 19, 2006 an IED exploded under Barclay’s vehicle killing three fellow soldiers and burning his body over 40%.  After two years of surgeries and rehabilitation, Barclay medically retired in 2008.  He has had over 30 surgeries to correct facial and hand disfigurement and still has more to go.  His injuries, as severe and debilitating as they were, did not alter Barclay’s love for family, God, and Country. For his service in Afghanistan, he received two Purple Hearts and a Bronze Star.

Barclay’s family played a pivotal role in his recovery by providing an environment where he could focus on healing and overcoming all of his wounds physically and mentally.  He would not be to the point where he is today, without their support and love.

Currently, Barclay is working as a Wholesale Property Insurance Broker for CRC Insurance Services.  He is a member of the top producing property team for CRC, which is the 2nd largest wholesale insurance company in the country.  Barclay recently attained his CPCU accreditation which is considered the gold standard in insurance.  He has used his past experiences in the service to guide him and lay a successful foundation in becoming an up-and-coming property broker.

Barclay is a board member for Disabled Veteran Insurance Careers and he also volunteers at his local Houston Goodwill Veteran outreach program.  His main goal now is not to be remembered as just a wounded veteran, but as a loving husband, a role model to his children, and a valued asset in his community.

Barclay cherishes every opportunity being a member of Team 43 provides.  Team 43 offers a competitive outlet to participate and compete in a sport he grew up playing and still loves, the ability to reengage with fellow warriors who relate to the sacrifices both he and his family have made.  Team 43 has been instrumental in supplying Barclay and his family a dynamic platform to network with his fellow veterans and with key leaders in his community.  This platform has given him a multitude of possibilities in achieving success post injury.  Team 43 has been and still is critical piece in creating an environment for him to lead and achieve his goals.

Barclay is married to Sierra, and they have three beautiful daughters.  The family resides outside of Houston, TX.