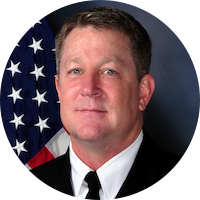 Herring was wounded in an improvised explosive device attack on his vehicle during a firefight in Baqubah, Iraq on February 8, 2007.  He was awarded the Silver Star, the Bronze Star Medal with Valor device, the Bronze Star Medal, and the Purple Heart for his actions.  For his dedication to the Special Forces and his service as a Green Beret since 1986, Herring received the Saint Philip Neri Bronze award in 2012.

In 2011, after serving for more than 25 years with the Chesterfield County Police Department in Virginia, Herring Ret. at the rank of Lieutenant.  He holds an Associate in Police Science Degree from John Tyler Community College in Chester, VA and a Bachelor of Business Administration Degree from Averett University in Danville, VA.  Herring is a graduate of the North Carolina State Highway Patrol Administrative Officers Management Program at North Carolina State University.

The game of golf and competing in the Warrior Open has had a positive effect on his life.  It has provided the drive to work hard on his game, which in turn provides an outlet for him mentally and physically.  Herring enjoys the Warrior Open friendships and is a proud member of Team 43.  In 2018, he won the low-net Warrior Cup.

In 2015, Herring was appointed as the fourth State Command CWO for the N.C. National Guard and currently works in Raleigh, NC.  He has been married to Michelle for 27 years.  They have two children, Samantha and Michael, and reside in Roanoke Rapids, NC.