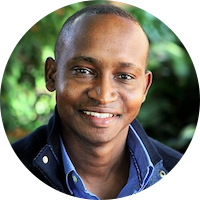 CEO and Co-founder, Teach for Uganda
2018 Forum on Leadership Speaker

James “Kassaga” Arinaitwe was born and raised in rural southwestern Uganda, where he lost his entire family of six to AIDS and other preventable diseases before he turned 10. At 11, he travelled alone on a bus across the country to ask the president of Uganda for a high school scholarship. Instead, he met the First Lady who sent him to an elite high school in Kampala. Soon after high school, an American family brought him to Florida. He was awarded a full scholarship to Florida State University, where he later received a Master of Public Health and Policy. In December 2017, FSU awarded him the Reubin O’D. Askew Young Alumni Award for his outstanding leadership and service to humanity.

Today, Arinaitwe leads Teach for Uganda, which recruits, trains, and develops promising university graduates and young professionals working to end educational inequality. Previously, he worked in international development at The Carter Center, was a 2012-2013 Global Health Corps Fellow in New York, and a school partnerships manager at Educate!. In 2014, Arinaitwe was selected as an Acumen Global Fellow, and spent a year in India providing education and livelihood skills to 2 million underserved youth. Arinaitwe is an Aspen Institute New Voices Fellow, and his op-eds on ethical and effective development solutions have been featured in Al Jazeera, NPR, Devex, The Guardian, and The New York Times. He also has a Master of Arts in sustainable development and international policy from the SIT Graduate Institute.