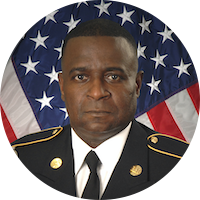 Sergeant DeWitt T. Osborne III joined the U.S. Army in 1982.  While serving in Iraq in support of Operation Iraqi Freedom, his vehicle was hit by an IED outside the city limits of Bagdad.  He suffered multiple injuries to his C-spine, right shoulder and right foot, as well as a traumatic brain injury.  Sergeant Osborne was evacuated to Walter Reed Army Medical Center for treatment, including 18 surgeries, countless hours of mental and physical rehabilitation, six months in a wheelchair and a total of four years at the hospital.  He retired from military service in November 2010.

In 2009, after being told by his doctors and surgeons that his military career was finished, Sergeant Osborne went through a period of depression.  He was introduced to the game of golf by the Salute Military Golf Association and in April 2010, after the last surgery on his C-spine, he decided that he wanted to live a better, healthier life.

Sergeant Osborne enjoys the physical and mental challenge of golf.  The sport also serves as an opportunity for him to share his combat experience, as well as life after his injury.  Among many other awards, Sergeant Osborne is a recipient of the Purple Heart.