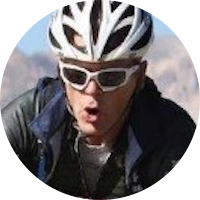 Lieutenant Colonel David W. Haines served as a soldier and officer for almost 30 years. In 2006 he was wounded by a roadside bomb while on patrol in Baghdad, Iraq. After over 25 surgeries to his hands, left arm, and right leg, Haines was found fit to return to duty in 2009. He retired in 2012 after successfully commanding one of the largest Warrior Transition Battalions in the U.S. Army.

Haines’ invitation and opportunity to ride with President Bush at the inaugural W100K in 2011 encouraged him to continue mountain biking. Since that first W100 he has completed some of the toughest ultra-endurance mountain bike events in the world: the Leadville Trail 100 MTB Race (three times) and La Ruta de los Conquistadores in Costa Rica (two times). He has also completed a number of other long distance cycling and 12 hour mountain bike events.

Since retiring from the Army in 2012, Haines has worked in the nonprofit industry with veteran service focused organizations; lived and worked in the United Arab Emirates (UAE) as a leadership instructor at that nation’s version of the Command and General Staff College; and assisted the UAE Land Forces with professionalizing their noncommissioned officer corps career development. He currently works as a leadership consultant for Booz Allen Hamilton at the US Army Cadet Command at Fort Knox, KY.

Haines’ current projects include expanding trails and greenspace in his local community to provide greater opportunities for cycling, mountain biking, and outdoor recreation. He is leading efforts to start middle school and high school cycling clubs in his region to encourage youth to discover the benefits of exercise and cycling. Haines is a member of the board of directors and a trail steward for the Kentucky Mountain Biking Association-Lincoln Trails chapter and a member of the board of directors for the Adaptive Cycling Foundation.