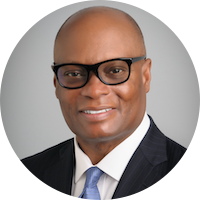 David Brown is a nationally recognized expert on security, law enforcement, and crisis management. He is the former and longest tenured (since the 1960s) police chief of Dallas, Texas the nation’s ninth largest city. David O. Brown is author of Called to Rise, a memoir. Mr. Brown is also a Fellow at the George W. Bush Institute, a University of Texas at Austin Distinguished Alumni, and ABC News on-Air contributor.

Mr. Brown is perhaps best known for his steady leadership during the worst police shooting in the nation’s history (Dallas, July 2016.) Direct challenges to protestors, “…put your protest signs down and put in an application,” combined with heartfelt commitment to surviving families of the fallen (five) and wounded (nine) officers, will remain etched in the minds and hearts of those impacted by the tragedy. Following the shooting, a news outlet called Brown “America’s chief who comforted a nation.”

Mr. Brown’s tenure as police chief, Dallas had the most significant reduction in crime in the city’s history. Both violent and overall crimes were reduced to 50- and 40-year lows, respectively. This included achieving the lowest murder rate in over 80 years while also reducing the number of officer-involved shootings by 40 percent, the lowest point on record.