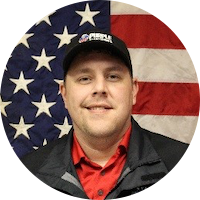 Staff Sergeant Dale Beatty was deployed to Iraq in 2004 in support of Operation Iraqi Freedom where his unit was attached directly to the 1st Infantry Division near Bayji, Iraq. On November 15, 2004 while on a patrol route littered with highly active insurgent operations, the vehicle he was riding in was ripped apart by anti-tank mines.  The explosion was so severe that it left him a double amputee below the knees.

Beatty spent over a year at Walter Reed Army Medical Center recovering from his injuries, and faced the challenges of infection; multiple surgeries, rehabilitation, physical therapy and the uncertainty of a successful transition back home.

With leadership and support from the Iredell County Home Builders Association, and many members of the NC community, a specially adapted barrier free home was built in 2007 for his family. Beatty served as the general contractor and his eyes were opened to the positive impact on his own family as well as those who assisted. As a result, Beatty and his fellow Iraq Veteran, John Gallina wanted to help other service connected disabled veterans with their housing solutions.  Together they co-founded Purple Heart Homes to help veterans and their caregivers that served in all eras.

Thirteen years after their injuries, Purple Heart Homes is now 10 years old and has completed over 300 projects in two-dozen states. It has grown substantially by adding community-based chapters in nine states.  PHH is making a difference in the lives of veterans of all eras, while reminding every community of their responsibility in respecting and honoring Veterans and their families.

Beatty was a 2013 Top Ten CNN Hero, and the work of Purple Heart Homes has also been featured for their work assisting veterans by Time Magazine, ABC, AARP, Reader’s Digest- and have received numerous recognitions from other veteran service organizations.

Beatty, is married to his wife, Belinda, and enjoy a close family life. They have three children: two sons, Dustin and Lucas, and daughter Sophia.