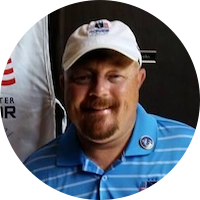 Staff Sergeant Curtis Fowler enlisted in the U.S. Marine Corps after his junior year in high school and two days after high school graduation he left for recruit training.  He served as riflemen and was a Squad leader and deployed twice to Okinawa, Japan.

After Fowler reenlisted, he was assigned to Marine Corps Security Force Company Bahrain in support of Operation Southern Watch, serving as Sergeant of the Guard and the Color Sergeant. After a year tour in Japan, Fowler served as Platoon Sergeant and Assistant Operations Chief and was part of Operation Enduring Freedom in the Republic of Georgia.

During his deployment as Operations Chief for Iraqi Police in the Anbar Province, Fowler was injured.  He spent time at the Wounded Warrior Battalion in Camp Lejuene to recover from his injuries.  Eventually, Fowler was medically retired due to his injuries.  He was awarded a Navy Commendation Medal for his service.

Fowler, his wife, and son, returned to Texas after retirement.  He attended the University of North Texas and received a bachelor's degree in History.

Upon graduation, Fowler had lost his passion for the game he loved, golf, and even life.  He was thinking about suicide.  Thanks to his wife and a golf program for wounded warriors, Fowler started to make strides to heal.  He had found a new mission and passion in helping other warriors.  Fowler had never realized the healing power of golf.

Currently, Fowler is involved in his church's children's ministry and teaching the next generation about Jesus.  He and his wife have two boys.  Their oldest, Hogan, plays hockey for a Dallas Stars youth team.  The youngest, Ian, loves hockey and will be playing soon.  They are a busy family, but are trying to help others, just as they were helped along the way.