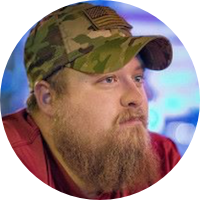 While deployed with 4/4 Cav in Zhari District, Afghanistan, Geeker sustained multiple traumatic brain injuries (TBIs) from numerous RPG attacks on his dismounted platoon.  After being medevac’d out and told he would return to the States for treatment, Geeker refused to leave his unit and returned to the fight.

Once home, due to his injuries, Geeker realized that he could not serve in the Army any longer and started down a very dark road.   He had grown up as a military kid and planned to make a career for himself in the Army.  He contemplated suicide and had a heavy drinking problem.  Luckily, at his lowest point, Geeker realized the life he was living was not the life his brothers who were killed would want for him or be proud of, so he decided it was time to stop feeling sorry for himself.  He knew it was time to start living.

Geeker found the game of golf.  It helped him make a major change in this life.  Golf helped him in many ways throughout his recovery.  He also found several other activities to challenge himself.  Geeker began snow biking, recumbent riding, hiking, and horseback riding.  He also started mentoring other veterans.  Currently, Geeker serves as the Chapter Commander, Department of Colorado Jr. Vice Commander, and Department Adjutant for the Military Order of the Purple Heart.

Geeker is currently going to school and has applied to the PGA Golf Management program through the University of Colorado – Colorado Springs.  He resides in Denver, CO.