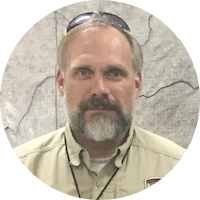 Sergeant Major Christopher W. Self is a 27-year United States Army Special Forces veteran.  Self joined the U.S. Army in 1986 in the Military Police Corps where he served as a patrolman in Germany and a Military Bomb Dog Handler at Fort Campbell KY.  In 1993, Self attended the Special Forces Communications Sergeant Qualification Course and was assigned to 5th Special Forces Group (Airborne) at Fort Campbell KY.  While assigned to 5th SFG(A), Self deployed throughout the Middle East to include the invasion of Iraq in 2003.

In 2005, while serving as a Special Forces Operational Detachment Alpha Operations Sergeant in Iraq, Self sustained gunshot wounds to both legs during a combat operation.  One bullet severed the sciatic nerve in his right leg leaving the leg paralyzed.  In 2006, Self and his family elected to have the paralyzed leg amputated to return to active duty and the active lifestyle he had known prior to the injury.  In May 2007, he had the opportunity to remain on active duty and deployed as the Battalion Support Company First Sergeant.  Self returned to Iraq again in 2010 as a Special Forces Company Sergeant Major.

Self retired from service in February 2013 and had the honor of continuing to serve by working with Wounded, Ill and Injured Service Members at Fort Campbell and Fort Knox.  He assisted those service members transitioning due to their illnesses, injuries or wounds to find employment and educational opportunities upon transition.  Self had the honor of placing more than 200 service members in federal internship opportunities and connecting hundreds more to education and employment opportunities.

In July 2017, Self accepted a position in Afghanistan training the Afghan National Army.  He is continuing his education with Colorado Technical University earning a Masters of Criminal Justice with a concentration in Homeland Security.  He is projected to graduate in 2018.  Self currently lives in Afghanistan with the support of his wife, Dana, and their three children.