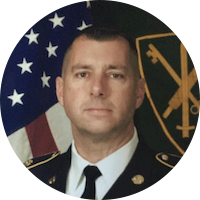 Command Sergeant Major Brian Flom joined the Army in 1991 and has served on multiple overseas deployments, including: Germany, Korea, Kosovo, Afghanistan, and Iraq.

In 2007, Flom was injured in Iraq during a rocket attack when shrapnel struck his head, penetrating his throat and lodging in his neck, breaking his jaw.  He was evacuated and spent six weeks at the Brooke Army Medical Center in San Antonio.  After recovering from his injuries, Flom returned to his unit in Baghdad, Iraq.  He was later diagnosed with post-traumatic stress (PTS) as well as a traumatic brain injury (TBI).

During his final tour in Iraq, Flom found it difficult to cope with what was considered a “normal” life back home.  Multiple doctors prescribed numerous medications to help deal with the PTS he was experiencing; none of which proved to be helpful.

Flom found that physically challenging himself through sport was most effective.  He began competing in marathons, triathlons and the outdoors.  A longtime mountain-bike rider, Flom got back on his bike and rides often.  He also put together a team that completed a full marathon while raising money and awareness for wounded warriors.  Flom stresses the importance of physical activity and the benefit it has on the mind in processing the stresses we deal with in life.

Since enlisting in the Army, Flom has received his Bachelor of Science Degree from Troy University and a Master of Arts Degree in Leadership Studies from the University of Texas at El Paso.  He currently serves as the Command Sergeant Major of CID/Army Correction Command, Washington, DC and looks forward to continuing to serve his country in the years to come.

Flom attributes his successes in his career to his wife, Monika.