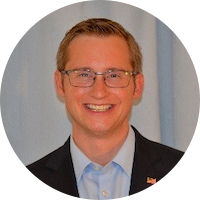 On September 1st, 2007, while deployed in support of Operation Iraqi Freedom, Hillstrom was hit by an IED while walking back from a mission, causing multiple injuries to the right side of his body.  The blast resulted in the loss of a large portion of his right triceps, ulna, and elbow. After numerous surgeries and extensive rehabilitation, Hillstrom was medically retired from the Army in 2009.

The single largest challenge Hillstrom faced during recovery was learning to not be limited by his physical disabilities.  Several years after the injury, Hillstrom went to the driving range with friends and realized he was still able to hit a golf ball, and that quickly evolved into a passion.  He was able to modify his swing to accommodate his injuries and play at a level that allowed him to keep up with friends. In addition to being physically therapeutic, golf has provided a mental release for him.  Moreover, becoming a member of Team 43 has allowed Hillstrom to share his newfound passion with other wounded veterans - something that has furthered both his physical and mental recovery.

After the military, Hillstrom went back to college and graduated from the Milwaukee School of Engineering with a Bachelor’s degree in Architectural Engineering with a specialty in Structural Engineering, a Bachelor’s degree in Construction Management, and a Master’s degree in Construction and Business Management.  Following his work in the field of project management in Chicago and Washington, DC, Hillstrom joined the State Department as a Foreign Service Officer (Diplomat) in 2016. He is currently posted at the U.S. Embassy in Brasilia, Brazil with his family.

Hillstrom owes a great deal of gratitude to his wife, Elizabeth, for her support, patience, and understanding during his recovery.  In addition to his wife, he has three young sons whose exuberance constantly brightens his day, greatly assisting in his recovery.