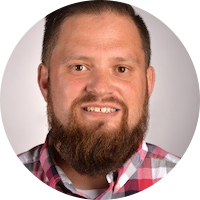 Specialist Andrew Coughlan was motivated to join the army after his high school graduation by the tragic events of 9/11.  Coughlan deployed to Iraq in September of 2003 and engaged with the enemy multiple times.

On July 19, 2004, his forward operating base (FOB Chosin) came under a heavy enemy mortar attack.  During the unfolding events, Coughlan provided aid to his injured comrades and worked to secure the bodies of those who were killed in action from the burning debris.  Roughly two years later, he was medically discharged from the army due to post-traumatic stress (PTS). Coughlan was awarded the Army Commendation Medal with Valor for his actions on that day.

Upon returning home, Coughlan’s PTS served as a barrier to his reintegration.  He states that “he took responsibility for his transition” and sought help at the VA hospital in Michigan.  After overcoming his battle with PTS, he built his career around helping other veterans as they transition back from their military service.  Coughlan has worked with Wounded Warrior Project since 2011 as an outreach coordinator and is now the alumni manager overseeing Florida and Puerto Rico.  He also serves in active roles with The Mission Continues Jacksonville Service Platoon and is a mentor with St. John’s County Veterans Treatment Court.

Committed to helping others beyond his military service, Coughlan became a bone marrow donor to a teenager who was battling leukemia and also to a stranger, in 2011.  In 2016, he donated a kidney to a fellow veteran he served alongside in Iraq.  Coughlan finished his bachelor’s degree in human services from Columbia College in the spring of 2017.  Today, he is happily married and enjoys life with his wife and two daughters.