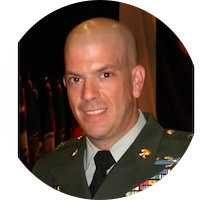 Staff Sergeant Alvis “Todd” Domerese enlisted in the U.S. Army as an infantryman in 1998 and served with the 101st Airborne Division, the 25th Infantry Division, and the 1st Cavalry Division.

On December 27, 2004, while on a routine patrol in Iraq, Domerese’s vehicle was struck by two IEDs simultaneously.  His vehicle was thrown across the road, killing his gunner instantly, and shrapnel fractured his skull causing traumatic brain injury (TBI), multiple pieces of shrapnel embedded in his face, neck, cheek, and jaw.  He was evacuated out of Iraq and spent the next six months recovering.

Domerese deployed to Afghanistan in 2010, but residual symptoms from his TBI and PTS became severe.  When he returned home in October 2011, he went to the National Intrepid Center of Excellence for treatment and was medically retired from the Army on September 28, 2013.

Since retirement, Domerese has been involved with the Intrepid Fallen Heroes Fund.  He has done speaking engagements and his story has been featured in several television and internet commercials.  He is also a registered member of Boy Scouts of America and regularly volunteers with his son’s troop.  Domerese loves being a part of Team 43 and says it feels like being back on active duty with his battle buddies.  He has found that he has made so much progress since becoming a part of the Team.

Domerese lives in Bradenton, Florida with Marti, his wife of over 20 years, and his two sons, Benjamin, and Joshua.  He enjoys running and biking and uses it as a way to relieve stress and help with his recovery.