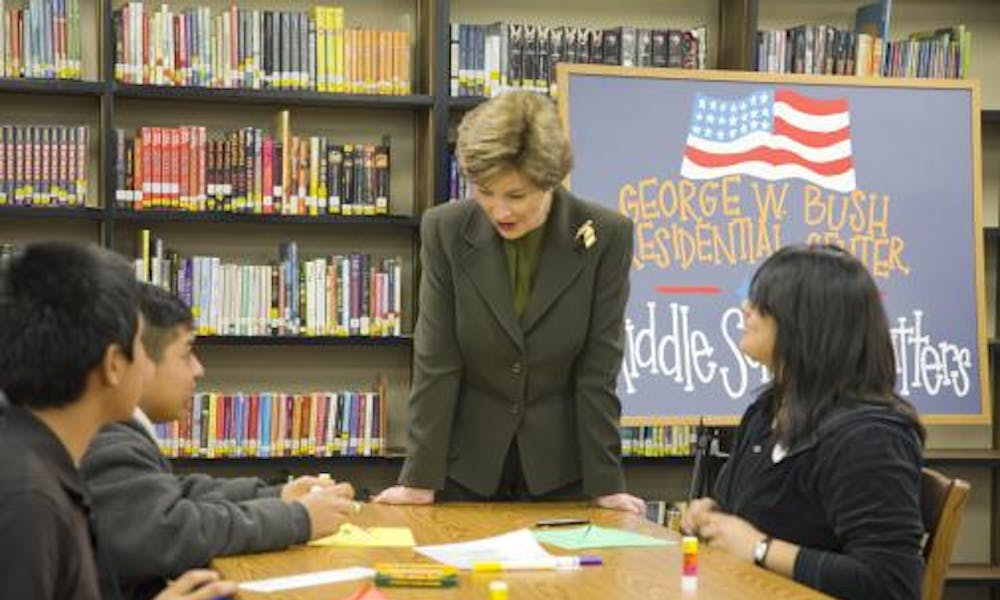 "One of the goals will be making sure they are prepared for high school," she said.

For the program, the institute has compiled research done by various institutions on what determines success in middle schools and plans to take that information and work with middle schools to implement new practices.

The program focuses on 11 elements for success, including school leadership, reading interventions, effective teachers, dropout prevention and school, student, family and community support. The Bush Institute's research team has come up with specific measures that can be taken in the classroom to improve performance in all of these elements.

"Within each area, researchers are coming up with principles and practices to implement," said Kerri Briggs, the Bush Institute's director of education reform.

For example, the institute said, dropout preventions could include assigning adult advocates to meet regularly with students at risk of dropping out. Those advocates could also greet students as they arrive, meet with students to review grades and assignments and regularly talk with the student's parents.

"We've got a lot of good feedback so far," she said. "We think there's an appetite for this."

"It's an integrated, holistic approach," said Briggs, adding that many schools are facing a budget crunch and are mindful of costs.

"Middle school is such a time of transition," Briggs said. "Lots of things are going on with them. It's those middle school years that we think are foundational to success in high school."

The Alliance for Excellent Education, a policy institute, says one-third of students — about 1.3 million each year — leave high school without a diploma.

Wanda Bamberg, superintendent of the Aldine school district who helped develop the program, said she would like at least one of her middle schools to participate in the program. She said it will be a good opportunity for teachers and school officials to get guidance from researchers from around the country.

"They will actually have people come into the schools and work with staff, and that's an opportunity," she said. "When people are trying to improve, they really do value those opportunities."

Andrea Prejean, deputy director of education policy and practice for the National Education Association, a teachers' union with 3 million members, notes that there are many "outside fixer" groups focusing on education that incorporate research. She said there is a lot of good research out there and that the key to interventions is making sure educators are part of the process.

"Certainly we welcome any group that wants to join us in making sure that every student has a great public school," she said.

Noting that there are no "quick fixes," she said it takes at least five years to determine whether an intervention has been effective.

The Bush Institute is part of the George W. Bush Presidential Center, which will also include a presidential library and is set to be completed in 2013 on the campus of Southern Methodist University.

The institute, which is already up and running, focuses on education reform, global health, human freedom and economic growth. Last year, the institute unveiled its first big education initiative, which focuses on improving the performance of school principals. The institute's Alliance to Reform Education Leadership, or AREL, will consist of school districts, universities and foundations offering educational programs to current and future school leaders.

Initial funding for the Bush Institute's middle school project comes from a $500,000 donation from the Meadows Foundation.