How Democracies Should Respond in a Post-Fact World

Essay by Laura Thornton, Senior Fellow and Director at the Alliance for Securing Democracy at the German Marshall Fund.

Wars are not won on the information battlefield, but they certainly are fought there.  Why a free flow of reliable information is key for sustaining democracy.

Russia’s war in Ukraine is a horrific enactment of the struggle between autocracy and democracy. As President Volodymyr Zelenskyy poignantly stated, “Russia fears our democracy more than we are proud of it.”

Putin understands well that democracy spreads, and, if on his border, could quickly infect his country and threaten his power. The Russian invasion aims not only to fulfil his delusional visions of ethno-Russian nationalism and reclaim a fallen empire, but also to signal authoritarian ascendance both globally and domestically.

For years, Russia used the full menu of these tools in Ukraine with the unsuccessful aim to subvert democracy and ensure a docile and obedient government in Kyiv. Russia laundered money through oligarchs to support influence operations, recruited Ukrainian officials and politicians, arrested civil society activists and journalists in Russian-occupied Crimea, and carried out cyber-attacks on critical infrastructure.

The Kremlin’s favored tool has been its information war through state-sponsored media outlets, useful idiots, and troll farms. Unfortunately for Russia, Ukraine has established itself as a leader in countering and defending against disinformation.

Before and during the war, Russian narratives have employed diverse and contradictory themes, from offensively “liberating” Ukraine from the drug-addled, Nazi leadership to self-defensive false-flag stories, victimization, NATO aggression, and Russian restraint. Data voids have been manipulated, elevating Russian state-backed media in search engines on Google and YouTube. China has also jumped to Russia’s defense, ensuring its narratives are in lockstep with the Kremlin.

The Kremlin’s favored tool has been its information war through state-sponsored media outlets, useful idiots, and troll farms. Unfortunately for Russia, Ukraine has established itself as a leader in countering and defending against disinformation.

Yet, Ukraine had bolstered the country’s information defenses, creating broad public awareness of Kremlin tactics. They were ready, swiftly calling out Russia’s playbook and pre-bunking narratives by foreshadowing Russia’s next steps. The United States aided these efforts by releasing intelligence to fortify this exposure.

While Russia’s information war has had setbacks in Ukraine, information disorder, through the spread of mis, dis, and mal information, is contributing to democratic backsliding elsewhere. Information is the fuel that allows democracy to operate. Bad information thwarts citizens’ ability to make informed choices and hold leaders to account. Disinformation also engenders polarization, a boon to autocracy as a divided society is easier to manipulate and creates advantageous pecking orders.

Lies and conspiracies erode trust in institutions and the political process, including elections. In the U.S., 71 percent of Republicans believe the lie that President Biden’s victory was illegitimate, and 147 Republican lawmakers voted against the certification of the elections based on this lie. This is despite all audits and legal cases showing the election as legitimate and the Trump administration’s own assessment that the election was the most secure in history. The election lies drove President Trump’s supporters to attack the U.S. Capitol leading to the deaths of five people.

Ultimately, information disorder leads to an ungovernable state, where there are no trusted referees and sides have their own sets of “facts,” or, as former Trump spokesperson Kellyanne Conway said when confronted in a lie, “alternative facts.” In the post-fact world, people no longer care about truth, evidence, or even government delivering, and are susceptible to illiberal leaders who evoke grievance, tribes, and culture wars. Bongbong Marcos ran a campaign based entirely on fantasies of a traditional, glorious past when his father ruled and on lies about his opponents. When confronted with his mendacity, his voters acknowledged but shrugged off his lies.

Though democracies around the world are facing this challenge, there is no clear community of practice on solutions. And, like democracies, autocrats have each other’s backs. They forge alliances, share tactics and technologies to suppress critical voices, and launch supportive information operations.

While Russia’s information war has had setbacks in Ukraine, information disorder, through the spread of mis, dis, and mal information, is contributing to democratic backsliding elsewhere.

There is need to document the best approaches to tackling information disorder, measure what is working and what is not working, and create clearinghouses of best practices. Much of this burden may fall on nongovernmental organizations, particularly in the United States where government institutions lack trust. But here are my recommendations for dealing with this modern challenge:

Fact-checking has popped up as a vogue cottage industry, and while important for documentation, it does not change minds and can become politicized. Offensive communications and public diplomacy, such as the promotion of compelling counter narratives, are needed.

In addition to successfully pre-bunking Russian lies about the war, Ukrainians have effectively played an offensive strategy by flooding the information zone with images of Ukrainian bravery and cunning – Zelenskyy’s “I need ammunition not a ride” – and evocative mythology like the “Ghost of Kyiv.” Ukrainians have successfully communicated a national narrative, their country’s story, one that emotes a picture of democracy and unity, to preempt the Russian portrayal of corruption and Naziism.

Public diplomacy is also needed, and democracies’ efforts pale in comparison to our adversaries. The U.S. should increase investments in USAGM [U.S. Agency for Global Media], for example. We spend around ten million per year on Spanish-language broadcasting at USAGM. But RT en Espanol has eight times as many followers on Facebook and ten times as many on Twitter, according to CrowdTangle.

Public diplomacy is distinct from disinformation propaganda because it is based on verifiable facts and relies on channels in a free and fair media landscape, where it can be scrutinized. But it could learn from the appealing and emotional nature of our adversaries’ information operations – TikToks rather than fact sheets, funny memes over policy documents.

Inundating the information space with truthful content can also be effective. In the country Georgia, our research using control and treatment groups found that providing factually correct information about Russia, Europe, and the U.S. shifted attitudes on foreign policy. Further, tactics, including using games and apps, to deescalate and redirect users by meeting them where they congregate on social media and offering them compelling alternatives must be expanded.

Defending against information operations means moving from understanding them to an ability to predict them — when they are likely to emerge and in what form. To do so requires leveraging both expert and technological means to enhance threat intelligence. Regional expertise could provide predictive assessments of narratives that are likely to emerge in response to evolving geopolitical events. This work could be also informed by technical analysis of past information operations to assist in predictive capacity.

Tracking and analysis of the information space must continue, including the use of technical tools. Better analysis is needed of Huawei and Alibaba’s filters, for example, and how they suppress political information. In addition to examining the general pollution of the information space, trackers must focus on online harassment and efforts to mute good information. Tools are needed to track laundromats — how narratives are passed through different information channels — and understand data voids and how malign actors exploit online spaces.

In the post-fact world, people no longer care about truth, evidence, or even government delivering, and are susceptible to illiberal leaders who evoke grievance, tribes, and culture wars.

To create real deterrence for malign actors, there have to be real costs, which involve treating information operations as one would any other transnational criminal enterprise, using sanctions, asset forfeiture, and other law enforcement and intelligence responses.

Social media platforms’ business models profit from amplifying and fueling disinformation and hate, and regulations are needed to reform online advertising, introduce some intermediary liability, and enhance transparency. Platforms should also ban governments that restrict access to the same platforms for their people. A Chinese diplomat, for example, can use Twitter to advance People’s Republic of China propaganda about Xinjiang to the outside world when a taxi driver in Xinjiang can’t even access the platform. Bans could be clearly justified as a human rights decision based on another country’s crackdown on free expression.

Deal with the demand problem

Efforts to restrict bad information sources and the channels through which they spread only get us so far. We have a demand problem, where we the people seek out, absorb, and spread lies and conspiracy theories to justify our underlying grievances and fears.

Our publics are addled by a strange combination of gullibility and cynicism. Gullibility in that we fall for narratives with no basis in fact. As Hannah Arendt wrote, “They do not trust their eyes and ears but only their imaginations.” Cynicism because we do not care about our leaders spreading lies, as we believe that politics and government are inherently dishonest and corrupt.

Although more research is needed to understand the ingredients of vulnerability and resilience, initial studies show, not surprisingly, that societies with low levels of trust in government, weakened social cohesion, and pessimism toward government effectiveness are more vulnerable. Building more discerning, thoughtful publics must go far beyond media literacy programs and civic education to address deep, underlying ills in our communities, and “going local.”

Resilience starts at the grassroots, with a bottom-up approach. We need investments in community life, such as Girl Scouts, rec centers, public libraries, and sports, as well as support for independent local media, which tends to garner greater trust. Bringing together people from disparate backgrounds to work toward a common goal, such as mandatory civil service, is also worth exploring to break across information bubbles and build societal trust.

There is no one solution, and we must approach the problem holistically and learn from one another. Northern European nations are leading the way with whole-of-society approaches to combating information warfare and building societal resilience. Finland has embraced “comprehensive security,” in which defense, civil society, and government work together on bolstering defenses through media literacy and mass communications. Sweden has engaged national, regional, and local governments with public and private sectors to build defense capabilities.

Nations scavenged by information disorder will face democratic erosion and conflict, and ultimately are not sustainable. Such an existential threat demands more serious prioritization and investment from governments, civic actors, private sector, and us. 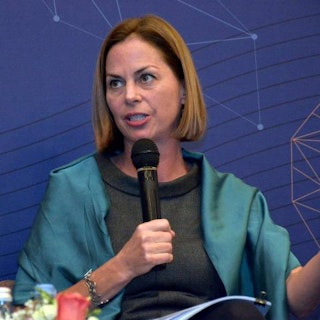