There Never Was a Threat from the West, Mr. Putin

Essay by Michael C. Polt, former U.S. Ambassador to Estonia and to Serbia and Montenegro; Ambassador-in-Residence at Arizona State University

An experienced American diplomat shares his views on how the West can build a more resilient future, one that fends off the resurgence and ascendancy of autocrats.

My diplomatic career began in the late 1970s, when we were better prepared in the middle of the Cold War to prevent what is happening now in Ukraine.

The Cold War pitted an alliance of free countries against a harsh dictatorship. Despite the Soviet narrative of the time, the Soviet Union never faced any threat from these democracies. Despite Moscow denying many countries the right to be free, no one in the West ever threatened Russia, except in retaliation if attacked. Led by the United States, the free world, as we used to call it, transcended mutually assured nuclear destruction. We indulged the Kremlin’s fantasy of a western threat with arms treaties and confidence-building measures.

After nearly a half century of enslavement, the Soviet Union’s collapse of its own weight in December 1991 finally made the hope of freedom a reality for a large part of Europe. For the newly liberated, there were two passionate objectives. First, rebuild their democratic societies. Second, secure the recovered freedom by joining the guarantors of Western values: the North Atlantic Treaty Organization (NATO) and the European Union (EU).

The Cold War pitted an alliance of free countries against a harsh dictatorship. Despite the Soviet narrative of the time, the Soviet Union never faced any threat from these democracies.

Drawing lessons from the history of two world wars, the choice for those clubs quickly became obvious: bring in as many eager aspirants as possible. While not everyone in the West agreed, how could Western nations deny them and us that which we had fought decades to achieve?

As a result, Estonia, Latvia, Lithuania, and many of their larger neighbors exercised their sovereign rights to choose their international partnerships. Years later, as U.S. Ambassador to Estonia, I experienced the intensity and passion of the Estonian commitment to these partnerships, especially the security alliance.

The new NATO and EU members prospered. Even Russia initially seemed to make positive noises about joining in some form as stakeholders of a post-Cold War world. Meanwhile, we in the West, as winners after a long confrontation, were eager to declare an end to a painful shared history.

The U.S. quickly accepted the illusion of a successful hand-off, primarily to our European partners, to secure Europe’s future. In turn, those partners firmly asserted that they were fully capable of managing the new era of peace. America was eager to pivot to Asia and accept these assurances, even though our threat assessments and European intent and capabilities did not match.

These contradictions were obvious during my conversations with my German counterparts in Bonn and Berlin. Yet we chose to ignore them.

The bloody breakup of Yugoslavia and the disastrous European response quickly shattered those illusions. Thousands of lost lives later, the U.S. led a joint NATO action to dislodge and bring to justice a dictator for whom no method of achieving his ends was too cruel or too bloody.

Slobodan Milosevic and his fellow war criminals paradoxically had learned only one thing from our aspirational “Europe whole, free, and at peace.” And that was they had the opportunity to strike. Sadly, both in Belgrade and in Banja Luka, the spirit of revanchism and historical grievance lives on in the autocratic behavior of their leaders today.

Photos of Slobodan Milosevic, Vladimir Putin and Alexander Lukashenko are seen on a building in Mitrovica, Kosovo (Giannis Papanikos / Shutterstock)

During my time as ambassador to Serbia and Montenegro, I was as impressed with the strength and legitimate aspirations of the Serbian people for a better future as I was disappointed with their leadership’s unwillingness and inability to take them there.

Meanwhile, some 2000 kilometers northeast of the Serbian capital, another twisted student of history had already drawn his own conclusions about the past and his own future. Vladimir Putin assessed that a world order based on human rights, free economies, and democratic governance was not in his interest, but in fact represented the “greatest geo-political tragedy of the 21st century.”

Vladimir Putin assessed that a world order based on human rights, free economies, and democratic governance was not in his interest, but in fact represented the “greatest geo-political tragedy of the 21st century.”

Old enemies such as the United States were his new enemies and, in fact, additional enemies such as reformers inside Russia, like Alexei Navalny, had joined. Then he decided on his remedy, not dissimilar to Milosevic’s: Rebuild the lost empire and extinguish the flames of liberty with subversive attempts in Estonia and Montenegro, with war in Georgia and Ukraine, and with deadly repression at home and abroad.

Sadly, Western reaction was often muted at best. The response led to escalation and emboldening of the dictator. We allowed this regression by appeasement, rationalization, and accepting the legitimacy of Russian security concerns over non-existent Western aggression.

How quickly we had set aside the memory of the former East Germany’s laughable term for the Berlin Wall: “anti-fascist protection rampart.” To be fair, there were legitimate, if not excusable reasons for the U.S. taking the eye off the ball in Europe: 9/11 and the war on terror, the malevolent rise of China, domestic and international economies in distress, climate change, a deadly pandemic and more.

In the wake of these challenges came an astonishing attraction to authoritarianism over democracy here at home and around the world. At the same time, the U.S. experienced a relative decline in its power and a waning interest in its global leadership. These factors formed a perfect storm that led to the collapse of the world order that we had built and championed for decades.

So where does that leave us and where do we go from here?

For now, the chattering class is thoroughly occupied with analysis of how to handle Putin’s invasion of Europe. No matter how that tragedy ultimately plays out, Putin already has succeeded.

Aside from the illegal Crimea land grab and the additional parts of Ukraine he will destroy and occupy, he has also defined the narrative of our time. He will dominate international discourse for years to come. That includes how do we punish him, how do we learn to live with the consequences of his actions, how do we maintain a global coalition against him, and, ultimately, how do we eventually move on?

Damage to a residential building in Kiev, Ukraine, in February 2022. (via Shutterstock)

Ukrainians will have suffered permanent loss of life. The world will have lost any sense of stability. And all of us will have lost time addressing climate change, global health, human rights, and the unchecked rise of China, just to name a few challenges.

But what can we learn from this new reality? How do we build a more resilient future? And what should we have done differently in the heady days of the end of the Cold War to fend off the resurgence and ascendancy of autocrats abroad and here at home?

But what can we learn from this new reality? How do we build a more resilient future? And what should we have done differently in the heady days of the end of the Cold War to fend off the resurgence and ascendancy of autocrats abroad and here at home?

Drawing on more than 30 years of diplomatic practice, my recommendations are hardly revolutionary and remind me of the words of a brilliant colleague at Arizona State University, who once paradoxically asserted: “There is nothing innovative about innovation.” His point was that when you have a clear-eyed analysis of a problem and you address it effectively, it is neither noteworthy nor particularly difficult to do the right thing and make a positive difference.

Here is my non-innovative advice:

We will not solve all the world’s problems. But we will set the agenda, drive progress, and tell our story instead of being forced into denying the toxic fiction of others. 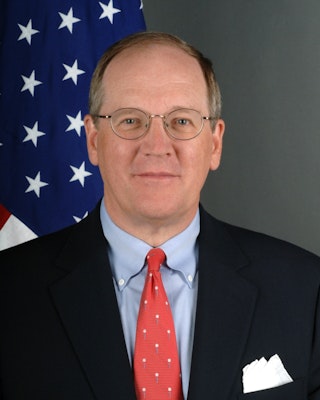