A one-time imprisoned Venezuelan democracy leader contends that the Ukraine conflict highlights authoritarianism is on the rise. Free nations must counter its rise, including in Latin America.

Leopoldo Lopez was imprisoned from 2014 to 2020, including in solitary confinement, for his role as an opposition leader to the rise of authoritarian Venezuelan rulers Nicolas Maduro and the late Hugo Chavez. Now living in exile in Spain and serving as a Wilson Center fellow, the former mayor of a Caracas suburb shared his views about the tension between liberal democracies and authoritarian governments with Christopher Walsh, Deputy Director of Freedom and Democracy at the Bush Institute, and William McKenzie, Editor of  The Catalyst.

A graduate of Kenyon College and Harvard University, as well as the recipient of the European Union’s esteemed Sakharov Prize, Lopez contends the Ukraine conflict highlights how authoritarianism is on the rise and free societies must counter that reality. That includes in Latin America, where the commitment to an open, rules-based government must extend to nations like Venezuela and Cuba.

We are at a tipping point. The struggle is evident and the way it plays out will depend upon how which one of those blocs play their cards and their commitment.

It’s very clear that autocracies are on the rise and that they have a commitment to expand autocracies. This is very evident. We’ve seen it in the way Russia has been involved in the U.S. elections, in the U.K.’s Brexit discussion, in the Catalonia referendum, in Venezuela, and in Nicaragua. These are facts. This is no conspiracy theory. And we have seen the way in which China and Russia are using disinformation campaigns to promote the lack of confidence in democracy. Now we see this can be taken to the extreme of a military invasion in Ukraine.

The rise of authoritarianism is a clear and present danger. The ball is on the side of liberal democracies to decide how they are going to uphold and defend the values of freedom and democracy because those values are being challenged.

The rise of authoritarianism is a clear and present danger. The ball is on the side of liberal democracies to decide how they are going to uphold and defend the values of freedom and democracy because those values are being challenged.

The reaction to Russia’s invasion of Ukraine surprised many in the way Europe came forward, but that commitment needs to continue. The commitment of Western democracies shouldn’t stop only in the case of Ukraine. It’s a mistake to think that you can contain the autocratic attack in Ukraine and leave out commitments to countries like Venezuela, Cuba, Nicaragua, or Hong Kong. Many nations also are on the front lines for freedom. Liberal democracies need to support their struggle.

This is not just about what liberal democracies do, and I’ll give you an example. The Summit for Democracy last year was a good initiative by the U.S. government. However, the discussion was limited to what were the liberal democracies doing? That’s important but insufficient. There needs to be awareness of what is happening at the front lines, too.

When I talk about the front lines of freedom, I’m talking about countries that are living today under autocracies. The majority of people in those countries want to live in a free country. I know for a fact that’s the case in Venezuela.

But it’s also true in many other countries. It’s true in Belarus, Hong Kong, Ukraine, and other places where there needs to be a solidarity, awareness, and commitment to understand that these other nations matter, too. In a different way, all of them are in a front line in the struggle for freedom.

When I talk about the front lines of freedom, I’m talking about countries that are living today under autocracies. The majority of people in those countries want to live in a free country. I know for a fact that’s the case in Venezuela.

What should more stable liberal democracies do to help those people who are on the front line of freedom?

We are at a moment where globalization needs to be rethought. Certain premises need to be reviewed. For example, there was this idea that economic growth would lead to trickle-down democracy. But some nations now have a dependency upon autocratic economies. That is very evident with the supply of natural gas and oil from Russia to Europe. The U.S. economy depends in a different way on the Chinese economy.

So, what type of globalization should go forward given this struggle between autocracy and democracy? This is part of the conversation that needs to happen.

Is there an impact that democratic movements in places like Hong Kong might have on similar movements in Central America or Latin America? If so, what might that be?

Let me start by tying this into your previous question about what liberal democracies should do. Previously, Western governments have focused on strengthening civil society and promoting development. Those are very important and should continue. But they are insufficient. Promoting civil society initiatives aren’t necessarily going to slow down autocratic regimes the way that freedom activists do.

We need to move from thinking about civil society to thinking about “freedom society.” By freedom society, I mean the movements and the individuals who are willing to organize themselves to articulate and push for the democratization of their countries through free and fair elections and the natural right to protest. That very important right needs to be defended, upheld, better understood, and promoted.

This takes me to your final question. The point has been made very clear to Xi Jinping and Vladimir Putin that millions of people have gone out onto the streets in all of these cases — Hong Kong, Belarus, Nicaragua, Venezuela. So, on February 4th [2022], the two of them signed a statement saying that Putin and Jinping, among other things, will join efforts to confront and crush protest movements for freedom.

Of course, this is a huge challenge that requires the involvement of many people. But we all should have this network mentality to create as much capacity between leaders, organizations, institutions, and individuals that are committed to this cause. 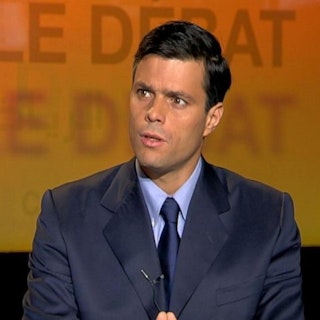