The European Union Needs to Stop Sleepwalking on Energy

European leaders smartly approved a range of sanctions on Russia, but the European Union now needs to reverse its dependency on Russian energy sources.

Early in the war in Ukraine, European leaders stepped forward and approved strong sanctions on Russia in a number of impressive ways. The European Union’s (EU) collective action was a smart political and economic move, signaling to Vladimir Putin that the West would stand together against his unjustified invasion of Ukraine.

True, the G-7 members – the United States, Great Britain, France, Germany, Canada, Italy, and Japan – pledged earlier this month to ban or phase out their energy supplies from Russia. And European Commission President Ursula von der Leyen declared EU nations will be banned from buying Russian oil by the end of this year.

But the plans are not finalized due to, among other things, Hungary’s threat to break consensus. EU leaders only have laid out plans to become more energy independent over the next year. 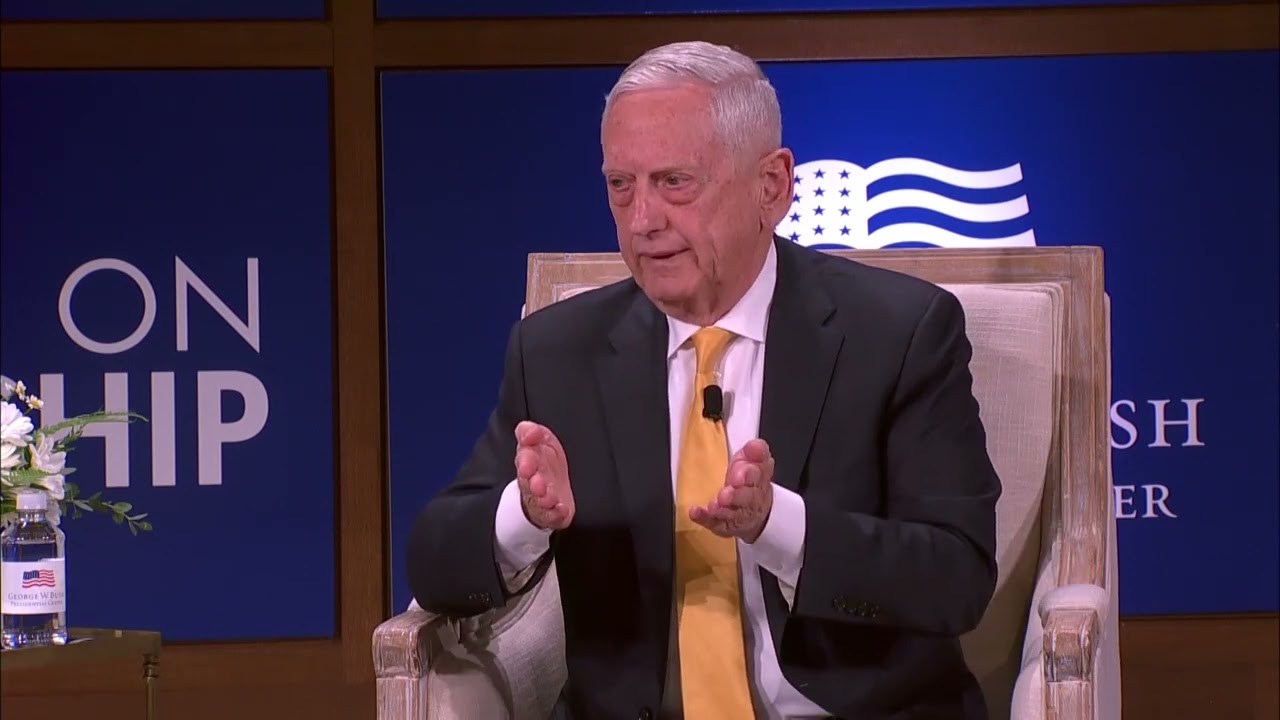 Former Secretary of Defense James Mattis discusses how he would approach building coalitions to address the crisis in Ukraine at the 2022 Forum on Leadership.

That Russian bet should have looked like a bad wager to them a long time ago. Vladimir Putin has been telegraphing his behavior for more than a decade. From invading Georgia, to twice previously cutting off gas to Ukraine in the middle of winter, to taking Crimea, to aggressive behavior toward the Baltics and in Syria, to the downing of a civilian aircraft in Ukraine, Russia’s leader has shown the world his true stripes on numerous occasions.

Nevertheless, the EU kept sleepwalking toward, and eventually landing in, this crisis. As recently as 2021, the Energy Information Administration reports, the EU relied upon Russia for 45% of its natural gas. And the EU receives about 25% of its crude oil from Russia. Those figures have been stable for years, too.

Prior to the Ukraine invasion, Germany, for example, relied upon Russia for 55% of its natural gas, 50% of its coal and 35% of its oil. (Other countries also are quite dependent upon Russian gas.) It now seems foolish that Germany decided years ago to turn off its nuclear power plants in favor of importing natural gas and coal from Russia for its baseload power.

It is important to understand that these numbers represent a policy choice that energy buyers made across the EU. The fact is plenty of oil, natural gas, and coal exists on this planet. Finding available energy is not a math problem. It is an economic one in which the European Union failed to value reliability, resiliency, and trust.

The fact is plenty of oil, natural gas, and coal exists on this planet. Finding available energy is not a math problem. It is an economic one in which the European Union failed to value reliability, resiliency, and trust.

Lessons from the world of business

The concepts of reliability, resiliency, and trust are economic pillars in the world of business.

Forward-looking companies understand that reliability and resiliency are hard to value, but those concepts act like insurance. We spend money on insurance because the value of knowing that we are covered for various risks outweighs the financial cost of the expenditure. Buying insurance is a good trade that has become standard fare in our businesses as well as at home. Spending smaller amounts of money today that would lessen the impact of a major loss later makes sense, even if the chance of such a loss is small.

Similarly, the value of reliability and resiliency become apparent when we need them most. Companies that depend upon a small number of suppliers to provide raw materials for their product face a greater risk of a supply disruption than those who have a diversified portfolio of vendors.

Likewise, companies that rely upon a small number of customers to buy their products are at a greater risk of loss than those with a very diffuse customer base. In short, businesses with a greater diversity of customers and suppliers face fewer risks.

Customer and vendor concentration is such a risk factor that our Securities and Exchange Commission requires all publicly traded companies to disclose those concentrations in their public filings. That way, investors can factor them into their assessments of a firm.

Trust is the other misplaced component in the value equation. All other things being equal, a business with ethical management would be valued more highly than a business run by thieves. While both may provide the same product or service, which one would you value more highly as a partner with which to do business over the long term?

This answer is clear. Again, the market regulators require disclosures if management is subject to major litigation and boards are charged with ensuring that management teams are sound.

In my nearly 30-year career in managing one of the world’s largest natural resources private investment firms, I can attest that management quality had more to do with our investment returns than asset quality. We would echo Warren Buffett’s observation that giving a great management team a set of mediocre assets would produce better returns than giving great assets to a mediocre management team. Routinely, companies with superior management teams are valued more highly.

Ironically, transparency rules of the capital markets heed these simple business axioms – reliability, resiliency, and trust – at the company level, but not when it comes to energy – the driver of our global economy.

Ironically, transparency rules of the capital markets heed these simple business axioms – reliability, resiliency, and trust – at the company level, but not when it comes to energy – the driver of our global economy.

This is easy to understand at a personal level. How much do each of us value the fact that when we hit the light switch, the lights go on? Truth be told, we value it very little, until the electricity is cut off. How much do we value the fact that all those gas stations have inventories sitting around awaiting our arrival to fill our tanks? Answer: Not much, until we can’t find a station that has gasoline. During shortages, the value of reliability becomes very apparent.

Now, taken at a national level, the point is the same. How much do we discount raw materials from a single place that is run by a bad guy who has the power to withhold our supply or fail to honor contracts? Answer: Not much, until something bad happens to make us regret who we were doing business with. This is why the free world works so hard to counter the strength of cartels.

That latter reality returns us to Vladimir Putin and his behavior. Knowing how consistently bad it has been, the European Union’s leadership bears responsibility for its energy blunder. Indeed, EU energy buyers are financing Putin’s war against the West. As Joef Borrel,  the EU’s foreign minister, emphasized last month, the European Union is spending far more on buying Russian energy than it is on arms for Ukraine.

But there is a silver lining. The nature of events in Ukraine are such that a credible EU boycott of Russian energy seems inevitable. If that happens, EU energy buyers will be forced to find new suppliers.

They have been given a lesson in the value of “friend-sourcing” and the value of supplier diversification. Unfortunately, prices will have to rise to incentivize new supplies to come online and to adjust logistical routes. This will be painful, but not fatal.

Remember, this is not a supply issue. The world has enough spare productive capacity to replace the 2.2 million barrels of oil per day and the 15 billion cubic feet (bcf) of natural gas that Russia exported each day in 2021 to the EU. Since it is likely that China and perhaps India will continue to buy Russian crude, the EU will be able to find from other suppliers the crude that was previously destined for China and India. This should provide some relief right away.

Once these new supply sources are secured, the EU will have expanded its portfolio of commodity suppliers. That will allow European nations to reduce their dependence on Russia while increasing their resiliency at the same time.

In the end, the EU will be much better off, and Russia will have lost a major customer. This shift will liberate the EU’s foreign policy, allow Europe to stand united against Putin, and eliminate a major funding source for his nefarious activities.

So, it is time for the EU to do the inevitable: Take a firm stand and boycott all Russian commodity imports. Once that happens, the larger global community should provide logistical and financial support to enable EU nations to withstand the ensuing price shocks.

So, it is time for the EU to do the inevitable: Take a firm stand and boycott all Russian commodity imports. Once that happens, the larger global community should provide logistical and financial support to enable EU nations to withstand the ensuing price shocks.

Europe certainly will feel those price shocks, especially at first. But the price hikes will have a positive long-term impact since the best cure for high prices is high prices. When commodity prices rise, producers are given an incentive to increase the supply of that commodity.

Rising prices also will encourage consumers to conserve. Once the market balances, prices will come down. The market has worked to correct price shocks in the past and it will again.

We should recognize this moment as an important wake-up call. Russia is an enemy and doing business with it has costs. The Ukrainians are on the front lines of this conflict, but we all need to recognize the world has changed and make difficult decisions that support Ukraine, weaken the Putin regime, and build long-term resiliency at the same time.

This will be the next in a long line of wake-up calls that the West needs to build future resiliency. Our adversary China controls 80% of the world’s lithium refining capacity…but that alarm bell is for another day!