From a Vietnamese Orphanage to a Life of Service in America

For many, the U.S. military can be a gateway to the American dream.  For Kimberly Mitchell, her story began when was adopted as a baby in Vietnam by a U.S. Airman, continued to her own military career, and today is centered on ensuring other veterans can live their American dream.

Though the American dream looks different for everyone, Kimberly Mitchell’s story, which begins in a Vietnamese orphanage, is particularly unique. She was adopted by American Airman Ken Mitchell there during the Vietnam War. She was naturalized as a U.S. citizen in 1976, grew up in northwestern Wisconsin, and was drawn to join the U.S. military like her father.

Former Lieutenant Commander Mitchell graduated from the United States Naval Academy, served in the Navy for 17 years, was selected to serve as a White House Military Social Aide under two administrations, and worked for the Chairman of the Joint Chiefs of Staff. Now, she dedicates her time to serving veterans and military families at National University and is passionate about honoring Vietnam veterans in particular.

Mitchell talked recently with Catalyst Editor Brittney Bain about how her life has come full circle, and how her own American dream inspires her to pay it forward. Below are excerpts from their conversation, which has been edited for length and clarity.

What does the American dream mean to you?

The American dream means to me that living in America, you can be able to dream, to set aspirations, to set goals, and then be able to work toward them and be able to achieve them. Take my story, for example. I was one, born in Vietnam and adopted from an orphanage. And then two, I grew up on a farm in northern Wisconsin. Just the fact that I had the opportunity to go to the United States Naval Academy and was able to serve in the Navy as an officer — that's the American dream.

I also grew up in a community where the opportunities to participate in different things existed, whether it was 4-H, the church youth group, or school activities. I think that people who have experiences like that, through volunteerism, through different community activities, grow up to have a perception of the world that is different. Having opportunities to travel to foreign countries, to see different cultures, and to meet different people that maybe live in a different way than we do, it helps us to understand better.

The military offers that. The opportunity for a 5'2" Vietnamese orphan, who is a naturalized citizen, to be able to join the United States Navy, and to go work at the Pentagon for Admiral Mike Mullen, or to have the opportunity to represent the United States in international, multilateral discussions — that’s been my American dream. That was back in 2001, to talk about short and intermediate nuclear missile treaty arrangements. The Russians looked at me like, "Who are you?" And I was like, "I'm Lieutenant Mitchell. I represent the Joint Staff."

Kim Mitchell poses with Admiral Michael Mullen during her time with the Joint Chiefs of Staff. (Courtesy Kim Mitchell)

That's an amazing part of the American story and the American dream. Getting opportunities beyond your wildest dreams if you work hard, and you make it known what your goals are, and you are willing to work for it. It’s about being able to find success no matter what the situation is, wherever you started, whatever your background is, and also having the support to do so.

That's an amazing part of the American story and the American dream. Getting opportunities beyond your wildest dreams if you work hard, and you make it known what your goals are, and you are willing to work for it.

Do you think that anyone can achieve it? Do you think it is equally accessible to all Americans?

But, I think the more that we become aware of these inequalities, the more we can work together to start solving these things. We should not be relying on government to solve it all. I think there should be partnerships with government, including federal and state and local governments. Public-private partnerships with nonprofits, with for-profits, are ways we can figure out things together and find solutions.

What responsibility do you think comes with being an American?

Some of the responsibilities that come with being an American are knowing our values and knowing what respect for other people means. I think sometimes we have lost that respect for one another.

I also think, as Americans, we need to participate in our democracy for our country to work, whether it's local elections, state elections, and our federal elections, you need to participate. But, you also need to be able to accept the election results. Sometimes you're not happy with the results, but then that means you need to work to figure out things like, "what do I need to change, or who do I need to talk to, to get these things to change?”

Some of the responsibilities that come with being an American are knowing our values and knowing what respect for other people means. I think sometimes we have lost that respect for one another.

Can you elaborate on what role you think the military plays in helping some achieve the American dream?

I saw it when I was an officer in the Navy. It encourages people to be able to join a cause greater than themselves. And for many people, they need that. Whether it's folks who are growing up in very poor communities to be able to get out and make something of themselves, or to have a better opportunity to go to school, and to learn skills, and to join amazing teams, and accomplish missions.

I have seen a lot of that. When I was the CEO of Veterans Village of San Diego, we always had homeless veterans coming through. On any given night, we would have 450 homeless veterans living in our facilities. We had Vietnam veterans all the way down to 20-somethings who just got out of the military.

But what I found beneficial was when I would get up and talk to them about service, and about how they needed to remember when they raised their right hand and they took an oath. I said, "I don't care if you served one year in the military or you served 20 years in the military. What I care about is that you did make a decision at one point in your life to serve, right? And do you remember when you graduated from boot camp, how proud you were?" And you could see them nod. And I said, "Do you remember what it was like when you went to your first assignment and you started meeting people, and you started doing jobs that you never thought you could?" And I said, "Take those same skills and apply it now to your mission. Find a new mission now that you're out."

Kim Mitchell's family looks on as she takes her oath with the U.S. Navy on May 7, 1990, before attending the Naval Academy Preparatory School. (Courtesy Kim Mitchell)

The great thing about the military is that the basics of how to survive, how to accomplish tasks, and how to work with other people are instilled in you. You can take those lessons with you and apply them in the civilian world.

The great thing about the military is that the basics of how to survive, how to accomplish tasks, and how to work with other people are instilled in you. You can take those lessons with you and apply them in the civilian world.

What inspires the work that you are doing now?


Kim Mitchell is a member of the 2019 class of the Stand-To Veteran Leadership program, which aims to increase the impact and develop the skills of those who serve our nation's veterans.
Learn more about Stand-To

I'm working at National University as a senior vice president for military, veteran, and government affairs. I think what inspires me is all these experiences that I have had throughout my career up until now. I'm working with organizations to try to figure out, where are the gaps in education for our veterans, their spouses, and their children. Not everyone has the opportunity like I did to go to the Naval Academy or to get a master’s degree. But if they served, and they have family, and they have children, and they have never had the opportunity to go to college, what can I do now in my position at National University to create these opportunities?

That is something that Admiral Mullen really instilled in me when I worked for him. That education is the basis for successful reintegration for our families. I'm glad that I'm at National University now, and I have the support of the leadership to be able to do things to make a difference.

What drives me always goes back to the Vietnam veterans.... if I'm able to meet them, I let them know that I'm able to do what I do now because they were willing to do what they did back then. For me, it's full circle. 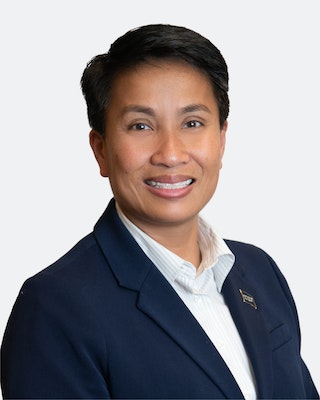