To have faith in our constitutional democracy, one must fully understand it. Civics lessons that underscore the intentional procedures and safeguards, implemented by America's Founding Fathers, can help rebuild trust in the system.

Trust in democratic institutions requires understanding how they work. To many, our government is a black box that frequently disappoints: We don’t really know how it works, just that it never seems to deliver on the promises made to us by candidates and policy advocates. We lose trust in part because we didn’t challenge those front-end promises as unrealistic.

Civic education can help. Those who better understand how our democratic systems work, and what they can and cannot do, will be more effective in participating in our democracy. They will place their trust with more foresight and greater care, and they can challenge those who overpromise or who misrepresent policy debates and decisions.

In a government class, you may have been taught that it takes a two-thirds vote of the House and the Senate to override a presidential veto, but that doesn’t help you much. Rote memorization of the government’s institutional structures and procedural rules leads to boredom and confusion, not understanding.

Those who better understand how our democratic systems work, and what they can and cannot do, will be more effective in participating in our democracy. They will place their trust with more foresight and greater care, and they can challenge those who overpromise or who misrepresent policy debates and decisions.

There is a better way to teach these important concepts. Learn the civic ideas before learning the mechanics of government.

We take many of these ideas for granted. We forgot them (or never learned them), or we think they are too basic, too simple to be worthy of our time. Some foolishly try to show off their supposed sophistication by debating esoteric details, all while missing the most important, simplest, often overlooked concepts.

Civic ideas should be tested, debated, even challenged. If an idea is bad or no longer applies, we should revise or replace it with something better. Before doing so, we need to understand the ideas that define how America’s government and economy operate and the strongest arguments for them.

There is power in these simple ideas. The more deeply you understand them, the more you discuss them with others, and the better you can recognize and apply them to everyday American life, the stronger you will be. And you will award your trust more effectively and be disappointed less.

Let’s examine four of the simplest and most powerful American civic ideas.

In America, we live in a constitutional democracy. A document is the highest authority, not a person. The Constitution is that document and all governing authority and policymaking flow from it. U.S. government officials swear an oath to the Constitution rather than to a monarch:

“I, Keith Hennessey, do solemnly swear that I will support and defend the Constitution of the United States against all enemies, foreign and domestic; that I will bear true faith and allegiance to the same; …”

The Constitution of the United States. (National Archives and Records Administration)

Many important civic ideas follow from our constitutional democracy, including:

A core function of the Constitution is to create rules that structure who has governmental authority and how they make policy decisions. Unlike some autocracies, and unlike some democracies that evolved from monarchies, the American governmental structure prevents the concentration of power in any one person or institution. Instead, it forces powerful factions to clash and compete. The Constitution disperses power in several ways:

When there is broad societal agreement, the Congress and president can move quickly to make sweeping policy changes. We saw this in the first few weeks after the 9/11 attacks, during the 2008 financial crisis, and early in the COVID-19 pandemic.

But in a large and diverse country, we Americans disagree on a lot. When those disagreements are wide or deep, dispersing governmental power slows policy action and limits government. This is a design feature, not a bug. Our Constitution forces factions, and even narrow majorities, to contest or compromise with those who disagree with their proposed policy goals. Dispersing power favors gradual, halting, incremental changes over large policy swings when the nation is closely divided.

Civic ideas should be tested, debated, even challenged. If an idea is bad or no longer applies, we should revise or replace it with something better. Before doing so, we need to understand the ideas that define how America’s government and economy operate and the strongest arguments for them.

Recent debates about dispersed power focus on the supermajority Senate filibuster as the legislative blocking tool of a unified partisan minority. This is a single procedural element in one half of one branch of one level of our government. Dispersed power is a broader and deeper idea, and policy conflicts take on more forms than just simple partisanship. Will the president act if a state uses federal pandemic funds in a manner inconsistent with federal policy? Should states set their own immigration, or marijuana, or abortion policies when those conflict with federal law or court rulings? What power does Congress have to constrain the president as he deals with a possible Russian invasion of Ukraine? Can the House and Senate resolve their differences on major legislation? The simple idea of the Constitution dispersing power applies in each case.

States matter. The United States of America was created as a union of states. It’s in the name. The states agreed to surrender some of their power to a new national government. (And it only took hold on the second try.) Much of the constitutional ratification debate was about how power should be allocated between the center and the regions.

In our resulting federalist implementation, states are quite powerful on certain issues. Public attention is often attracted to the nation’s capital, but the pandemic has shown the policy power and relevance of states. For two years, your health, your job, your schools, and your community have been shaped more by state and local decisions than by policies from Washington.

America is a liberal democracy that protects certain individual rights and liberties from governmental intrusion. Constitutional protections constrain our democracy and governmental expression of the peoples’ will. Among other liberties, we are each free to speak, to worship, to gather, to think, to vote, and to participate in our government as we see fit.

Democracy and freedom are at times in tension. In certain cases, the Constitution protects individuals’ freedom from democracy. We engage in heated debates about this boundary, where it is drawn, and whether it should be moved. At the same time, the core idea of this tension is a given in the American system, but wholly absent in some other nations.

These are four of the most basic and powerful American civic ideas. America is a constitutional democracy in which a document of rules has supreme power. Those rules disperse power in several ways. States matter and have policy power in our federalist system. America is a liberal democracy that protects individual freedoms from government and even from a democratic majority.

Set aside clever analyses and new frameworks. Re-learn simple civic ideas like these and apply them to daily life. If you look closely, you will see evidence of their power everywhere. And that may reinvigorate your belief in our institutions. 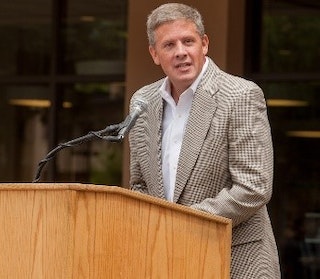