Cities Point the Way in Promoting Opportunity and Reducing Poverty

American cities can thrive or suffer from policy decisions. Five cities in the Northwest stand out as having mastered the fundamentals to promote inclusive economic opportunity.

Minneapolis skyline reflected in the Mississippi River. Minneapolis-St. Paul stands out for its success in delivering broad-based prosperity.

American cities are laboratories of democracy. Their differences in policies and economic patterns shed considerable light on the challenge of promoting upward mobility and alleviating poverty.

As we have studied America’s top 60 metropolitan areas over the last several months, five – Minneapolis-St. Paul, Salt Lake City, Denver, Portland (Oregon), and Omaha – stand out for their success in delivering broad-based prosperity. Their track record reflects four strategies: exceptional education systems, growth-oriented and construction-friendly policies, relentless focus on quality of life, and effective public-private cooperation among the cities and towns of the greater metropolitan area.

We rank each of the top 60 metros on four criteria – median household income, poverty rate, percentage in the middle class, and upward mobility – and add the four ranks together to calculate overall ranks. We also rank metros based on changes in these measures over the past three decades.

Salt Lake City ranked near the top for cities with inclusive urban growth.

Median income and the poverty rate – the share of households earning below the federal poverty threshold ($24,858 for a family of four) – tell part of the story. Our ranking also draws on studies from Pew Research showing each metro’s population share in the middle class, defined as families between two-thirds and twice the nation’s 2016 median household income of $60,309.

And to measure upward mobility, we rely on economist Raj Chetty’s Opportunity Atlas, which measures how the income of people who grew up in families at the 25th income percentile varies depending on where they grew up.

Together, these metrics provide a guide to which metros are succeeding in delivering relatively inclusive growth, and which aren’t.

Why focus on cities? 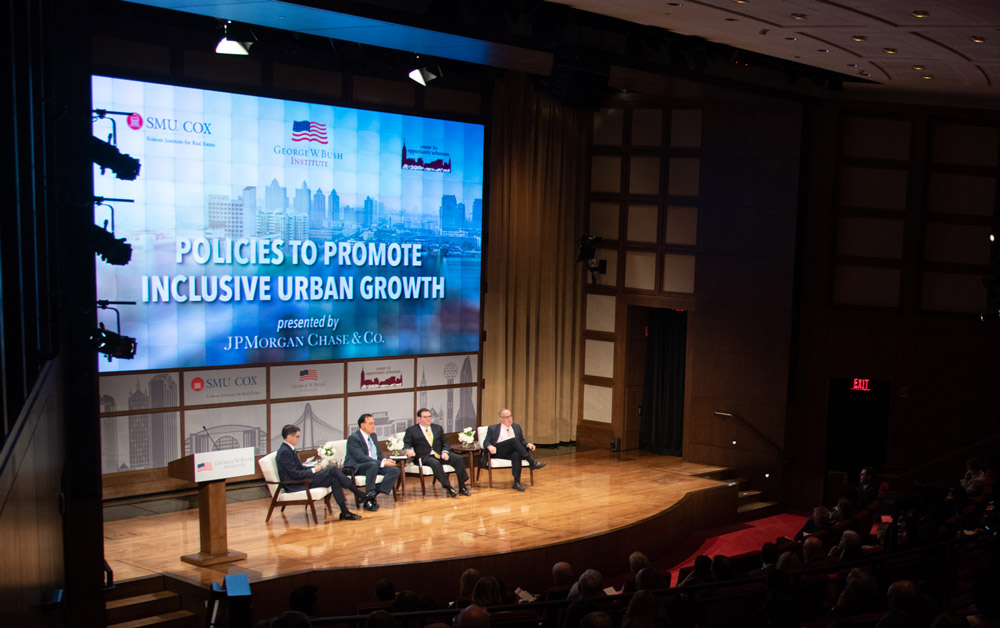 On January 31, 2019, the Bush Institute hosted an event examining how American cities can better promote upward mobility for their citizens.
Watch video from the event

Historically, cities have been the world’s chief engine of upward mobility. America’s top 25 metros produce more than half the nation’s gross domestic product. Americans in metros greater than 1 million people are 50 percent more productive on average than those in smaller communities. If big cities can’t eliminate widespread poverty, no place can.

If big cities can’t eliminate widespread poverty, no place can.

Also, metro areas are growing as a percentage of the overall population. Sixty percent of Americans, and a larger share of its poor families, live in the top 60 metros. Rural poverty represents a distinct problem, but the rural poor now constitute a small proportion of poor families.

Cities, finally, offer enormous variation and thus lessons on how to accelerate economic mobility. Median income is 2.3 times higher in the highest-income metro, San Jose, than in the poorest, New Orleans. Metro poverty rates range from 7.3 to 21.1 percent. Poverty rates have declined since 2000 by as much as 5 percent in some cities while rising an equivalent amount in others. And Chetty’s mobility measure is 25 percent higher in the best-performing metros than in the least mobile ones, holding a family’s starting income level constant.

Urban prosperity and poverty are highly persistent over time: Cities that delivered inclusive prosperity in the 1990s are mostly high performers today. Income, poverty, middle class share, and upward mobility are highly correlated with each other, meaning cities tend to be high or low performers on all four metrics.

Denver also ranked near the top for cities with inclusive urban growth.

Income, poverty, middle class share, and upward mobility are highly correlated with each other, meaning cities tend to be high or low performers on all four metrics.

And cities ranking high for inclusive prosperity today also tend to rank high for their rates of change in the four measures since the 1990s, meaning cities are diverging in their success in creating broad-based opportunity.

Booming Sunbelt metros like Houston, Dallas-Fort Worth, and Phoenix represent a different pattern: average in the overall rankings but improving over time. Austin, the Silicon Valley of Texas, is a special case, ranking high overall and first among cities in terms of long-term trends.

Adjusting for cost-of-living differences, especially for enormous differences across cities in housing costs, would have only modest effects on the rankings. Big coastal cities would rank lower, because sky-high housing costs mean families require much greater income to escape poverty and achieve middle-class lifestyles. Pittsburgh and Kansas City would rank a little better, since living costs for lower-income families in these cities are marginally lower than average.

Lessons from the standouts

The five standout metros of Minneapolis, Salt Lake City, Denver, Portland, and Omaha share numerous features. Each is, loosely speaking, in the northwest quadrant of the country. None has a population exceeding four million, which means each ranks below America’s top 15 metros in size.

They share four fundamental characteristics, illustrating how important it is for cities to get the urban basics right.

[Minneapolis, Salt Lake City, Denver, Portland, and Omaha] share four fundamental characteristics, illustrating how important it is for cities to get the urban basics right.

First, all five have proved good at raising highly educated populations. Their population shares with a bachelor’s degree or higher range from 33.1 percent in Salt Lake to 42.1 percent in Denver, versus the U.S. share of 30.9 percent. These highly educated workforces are mostly home-grown in each city, as Minneapolis, Portland, and Omaha in particular haven’t been big magnets for internal migration within the U.S., by large-city standards.

One might counter that these cities have low proportions of African-Americans and Hispanics, bolstering their education metrics. It’s true, higher-than-average white population shares in these cities – and high minority shares in most cities performing poorly in our ranking – point to the persistent role of race in accounting for urban poverty patterns. But the standout cities all score above U.S. averages in African-American educational attainment. Three score much better in Hispanic attainment too, while Salt Lake’s and Omaha’s numbers are slightly lower because their Hispanic populations are so young.

All five have built respected K-12 systems, and major universities like the University of Minnesota and the University of Denver play central roles in each city. Salt Lake has more than 200,000 university students living within an hour, including the exceptionally innovative campus of Brigham Young University in nearby Provo.

The standout cities contrast dramatically with the five bottom-ranked cities – Tucson, Fresno, Memphis, Birmingham, and New Orleans – each of which reports below-average educational attainment. Notably, Salt Lake pays teachers $17,000 more than nearby Tucson does, despite comparable costs of living.

The standout cities contrast dramatically with the five bottom-ranked cities – Tucson, Fresno, Memphis, Birmingham, and New Orleans – each of which reports below-average educational attainment. Notably, Salt Lake pays teachers $17,000 more than nearby Tucson does, despite comparable costs of living.

Second, each metro has pursued growth-friendly economic policies, including supportive approaches towards housing construction. Each benefits from a diverse economy, with welcoming policies towards small businesses as well as large employers like Medtronic and Cargill in Minneapolis, Union Pacific and TD Ameritrade in Omaha, and Goldman Sachs’s second-biggest U.S. facility in Salt Lake.

As for land-use policies, economist Edward Glaeser lists Minneapolis as a quintessential “Smart City” in his book Triumph of the City. Minneapolis has long promoted home ownership, and now enjoys an ownership rate of 69 percent – high for a large metro. In contrast to peer cities to the west, Denver has emphasized affordable housing construction since 2000, though it still faces growing affordability challenges due to in-migration from other cities.

Portland’s unusual “urban boundary” policies, aimed at preserving greenspace and preventing sprawl, have provoked critics arguing that anti-development policies induce high home prices at the expense of working-class families. But Portland, in contrast to neighboring Seattle, has promoted private-sector construction within its boundaries. Portland added 15,000 new units between 2015 and 2018 and – unlike other West Coast cities – saw a decline in rents last year.

Sustaining a relatively affordable housing stock is essential to broad-based prosperity, and not just because of the direct effects of unaffordable prices on working-class people. Perhaps more important, affordability influences a city’s ability to attract people with choices, from high-skilled young people to middle-skilled professionals looking for good places to raise a family. Employers go where potential employees want to live, and places attracting good employers in turn create high-opportunity environments for disadvantaged people.

While today’s housing costs pose a challenge to lower-income people in virtually all cities, prices are below the national urban average, relative to local income, in Minneapolis, Salt Lake, and Omaha. Denver and Portland, meanwhile, seem to be walking a fine line. Housing costs have reached worrisomely high levels, but, in contrast to California, they haven’t reached the tipping point at which the city experiences out-migration of middle-skilled and even high-skilled professionals.

Third, all five cities have made above-average investments in quality of life. Salt Lake, Denver, and Portland are lucky in their geography, though most would agree Minneapolis and Omaha are not. But all five rank high in the Trust for Public Land’s index of greenspace and outdoor amenities. The city of Minneapolis ranks first of all cities, St. Paul is second, and Portland is sixth.

Each city has invested in arts facilities. Even un-sexy Omaha, with excellent museums and arts festivals, ranked 28th out of 125 metros on U.S. News’ s last “Best Places to Live” list.

Fourth, all five have realized exceptional coordination between the public and private sectors and across political jurisdictions, rather than watching different players undercut each other as often occurs in other metros. The standout cities credit organizations like the Metropolitan Council of Minneapolis/St. Paul and Metro Denver Economic Development Corp. for contributing to geographically balanced development in their respective regions.

The experience of the standout cities also points to factors that don’t explain their broad-based prosperity. Each has seen higher-than-average growth in its foreign-born population, so lack of immigration can’t account for their high rankings. None operates an expansive system of benefits for its poor population, at least compared to cities like New York and Los Angeles.

Minneapolis, Salt Lake City, Denver, Portland, and Omaha have well-earned reputations for thoughtful, technocratic government. The distance of these cities from America’s Northeastern urban heartland as well as the Deep South may have spared them from the dysfunctional big-city politics of the former and the divisive racial politics of the latter. They’ve likely benefited from their middling size and their lack of dependence on smokestack industries.

That said, all five reinvented themselves after early histories that would not have suggested 21st century success – for instance, Minneapolis’s and Portland’s roles as mining and timber capitals, and Salt Lake’s history as a refuge for a religious group seeking to leave American culture behind.

These cities are success stories because of wise public policy. The inclusive growth they’ve achieved offers a path for other cities and towns. America will make headway in enhancing upward mobility if others will take it.

These cities are success stories because of wise public policy. 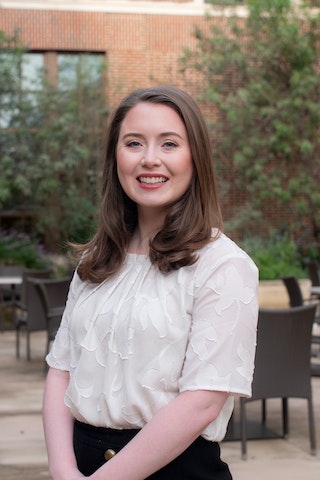