An Essay by Mark K. Updegrove

Mark Updegrove, author, historian, and director of the LBJ Presidential Library,  challenges millennials to run for office, just like young leaders of other generations stepped forward in their times.

The memory still burns bright. During the spring of 1979, in my junior year of high school, I ventured by bus with a group of my classmates from suburban Philadelphia to Washington, D.C., for a whirlwind three-day visit that included the standard sites and stops reflecting the splendor of the most powerful country in the world. But the highlight of the trip — not just for me, but for many of my peers — was meeting Peter Kostmayer, the dynamic 31-year old freshman congressman from our district, who spoke to us about the pressing issues of the day. “A member of Congress—and he’s meeting with us!” we thought.

Since that heady occasion, I’ve had the privilege of meeting seven U.S. presidents, five of whom I’ve interviewed on multiple occasions. But I remember distinctly what a big deal it felt like as a 17-year old to meet our congressman in the nation’s capital.

Mark McKinnon, co-creator of Showtime’s hit show, The Circus, and a former strategist for George W. Bush, John McCain, and Ann Richards, explains the compelling narrative millennials can offer the country as they become leaders in fields like politics, business, and non-profit work.

To say the least, many millennials don’t share my generation’s esteem for elected officials. A 2015 Harvard Institute of Politics poll found that a majority of millennials say they would choose to recall all members of Congress if it were possible. A Harvard poll earlier this year revealed that 50 percent of young Americans agree with the statement, “The politics of today are no longer able to meet with challenges our country is facing.”

A Harvard poll earlier this year revealed that 50 percent of young Americans agree with the statement, “The politics of today are no longer able to meet with challenges our country is facing.”

I accept that. Frankly, there’s a lot to be cynical about: intractable bi-partisanship breeding incivility and legislative impotence; members of both parties who put politics over country, and ideology over pragmatic compromise; vitriolic, divisive rhetoric clamoring in the media and strewn about social media.

And, after all, disdain for elected officials is nothing new. As Mark Twain wrote in the latter part of the 18th century, “Suppose you were an idiot. And suppose you were a member of Congress. But I repeat myself.” That has been bread and butter for everyone from Will Rogers and Johnny Carson to Jon Stewart and Samantha Bee. In many ways, it’s healthy.

But what I find troubling is that the millennial generation, which spans the ages of 18 to 34, is generally repelled not only by the political landscape but by the notion of getting involved in politics — directly or indirectly. Jennifer Lawless, an American University professor and author of Running From Office: Why Young Americans are Turned Off to Politics, says, “Young people are interested in saving the world and care about making their communities a better place. But they don’t consider electoral politics a way to achieve those goals.”

While millennials are as involved in their communities as previous generations, volunteering at higher rates, they “see non-profit organizations as more effective and trustworthy than politics and government,” according to the book, Millennial Makover: MySpace, YouTube, and the Future of American Politics, by Morley Winograd and Michael Hais.

That generational shift concerns me. There was a time when young people who wanted to make a difference to their country threw their hats in the ring almost instinctively. Young, ambitious members of the World War II generation like John Kennedy, Lyndon Johnson, Richard Nixon, Gerald Ford, and George H.W. Bush ran for and got elected to Congress at ages 29, 29, 33, 35, and 43 respectively.

There was a time when young people who wanted to make a difference to their country threw their hats in the ring almost instinctively. Young, ambitious members of the World War II generation like John Kennedy, Lyndon Johnson, Richard Nixon, Gerald Ford, and George H.W. Bush ran for and got elected to Congress.

They saw public service as the best route to making a positive contribution toward America’s betterment. So did members of the baby boomer generation: Bill Clinton was governor of Arkansas at 32, George W. Bush ran unsuccessfully for Congress at the same age, and Barack Obama became an Illinois state senator at 35. Even people like Tom Hayden, who railed against the government in the 1960s as a strident Vietnam War protester and member of the “Chicago Seven,” later became a California state legislator and senator.

As my wife often says, “Nothing’s going to change until something changes.” To accept politics as usual is to condone it. In this election season, which clearly signals that Americans are fed up, I hope that younger voters especially will see the changing tide as an opportunity to make their voices heard — not only by casting their ballots, but by having their own names among the candidates on them.

Our government works best when we’re all engaged and represented. The ideas and convictions of millennials, who recently overtook baby boomers as the nation’s largest living generation, should resound — and they will most resonate if members of their generation get in the game.

To borrow from Mark Twain: Suppose you were a defeatist. And suppose you didn’t have faith in your government’s effectiveness and credibility but refused to get involved in the process. But I repeat myself. 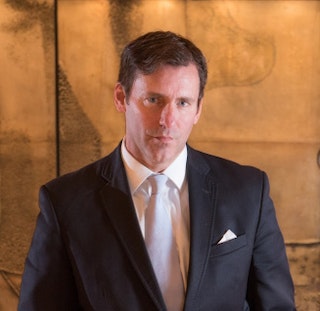