An Essay by Casey Gerald

A new breed of entrepreneurs and business leaders see purpose as the bottom line, not profit.

Not long ago, I visited a morning business show to promote the work of the organization I cofounded, MBAs Across America, and to give my thoughts on the larger issues of the day. Close to the end, still live on air, the host turned to me and asked: “Why are so many people joining your program?”

I responded: “Well, I’m finding that more and more people have a deep spiritual hunger for meaning.”

I wish I could convey to you the pained confusion that washed across the host’s face as he tried to figure out how a mystic had made it on this day’s show. Without responding, he rapidly transitioned to the next segment that would focus on Russian currency rates and falling oil prices.

Needless to say, I never joined the show again. But there, in that 20-second moment on live television, the whole drama facing today’s CEO, facing American business — facing American society — was displayed.

At the heart of the host’s question was a realization that something quite drastic must be afoot if anyone could convince scores of MBAs from the nation’s top business schools to leave behind the comforts of cubicles and high-paying internships to drive 50,000 miles across America in search of a way to use their time and talent not just to make a buck but to make a difference.

Something quite drastic must be afoot if, in the process, these rising business leaders found mission-driven entrepreneurs in big cities like Detroit and tiny towns like White Sulphur Springs, Montana (population 900). They were building businesses not just to make profit or create jobs, but to change lives and solve problems in their communities.

They were building businesses not just to make profit or create jobs, but to change lives and solve problems in their communities.

Average debt at graduation rose 56 percent, from $18,550 to $28,950, more than double the rate of inflation (25%) over this 10-year period. The rate of growth varied widely between states. While the majority of states saw the average debt of new graduates with loans rise two to three times faster than inflation, in five states it grew even faster—at more than triple the inflation rate, and in four states the growth was at or below the inflation rate.

That something is the fact that we have entered an era in which the core beliefs about our institutions, careers and economy are in question. We watched 9/11 end a late twentieth century Pax Americana. We entered the workforce as the global economy was collapsing. And we witnessed the once-sure link between education and the American Dream turn into a debt-laden mirage. Those realities define my generation, the Millennials.

It should come as no surprise, then, that trust in leaders, especially those in the business sector, is so low. If we are to regain society’s trust, and use that trust to tackle today’s great challenges, we must have leadership of a different sort: servant leadership.

What is a servant leader?

Though the philosophy of servant leadership can be traced back to ancient civilizations, a 1970 essay by Robert Greenleaf, “The Servant as Leader,” sparked much of the current discourse. In it, Greenleaf offers a definition of the servant leader: “The servant leader is servant first.”

By this he means that some folks are driven more by the desire to be in charge, and others by the desire to help people. Though the servant leader may be fully competent and engaged in the exercise of leading, she only does so as a means to serve.

This is a profound difference in intention, not just action.

What better time than now for the birth of a new breed of servant leaders? It must begin with a reset not of corporate strategy but of intentions: from leading for the sake of personal gain or company profits, to leading for the sake of serving our customers and employees in their quest for full humanity and, together, helping to solve society’s biggest challenges.

What better time than now for the birth of a new breed of servant leaders? It must begin with a reset not of corporate strategy but of intentions: from leading for the sake of personal gain or company profits, to leading for the sake of serving our customers and employees in their quest for full humanity and, together, helping to solve society’s biggest challenges.

To some, this might seem to overstep the bounds of the CEO’s job description. But it is in line with the best examples of leadership that pre-date our obsession with shareholder capitalism. And it is the only standard that rises to the urgency of our time, a moment that requires each of us to put our shoulder to the wheel of human progress.

Servant leadership can be learned, not in an instantaneous transformation — the business equivalent of Saul’s Road to Damascus experience — but in moments of insight that lead to enlightened daily practice. An example:

In May 2014, I delivered a speech to the graduating class of Harvard Business School that changed my life. It has been viewed over 165,000 times online, and it even landed me on the cover of Fast Company magazine. But while these facts might seem like life-changing developments at a surface level, it was actually a conversation with my 81-year-old grandmother the morning of that speech that taught me most about the path to growing as a servant-leader. 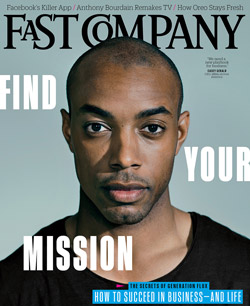 Casey Gerald appeared on the cover of the November 2014 issue of Fast Company magazine.

I woke up that morning to a perfect storm of misfortune: bad weather, little sleep, and trouble remembering parts of my speech. By 9 A.M., I had gone into a tailspin, so I called my grandmother and asked her to pray for me. Before I even finished asking, she had already begun — not by praying that I do a good job, but by uttering words that I will never forget:

“God, please help Casey remove self, so that whatever it is You have to say to people, they can receive it. Because there are many cultures, but there is only one mankind, and all of them can hear You — if he gets out of the way.”

That prayer transformed my approach not just to communicating but also to leading and serving. It made clear that the most vital and difficult work for an aspiring servant leader is to get ourselves — our egos — out of the way enough that we can be vessels for work that might be done through us, if it’s not about us. Servant leadership, as Greenleaf taught, starts in here, not out there.

Casey Gerald is a member of the inaugural class of Presidential Leadership Scholars, a program built by the presidential centers of George W. Bush, William J. Clinton, George H.W. Bush, and Lyndon B. Johnson. The program curriculum draws from the resources of each presidential center, relating key leadership moments from each administration and providing insights from how each president addressed pressing challenges.

As we grow as servant leaders, our companies should transform as well and become better vessels for the empowerment of others. This is not self-help gibberish doubling as business strategy, nor is it at odds with the core function of the corporation in a capitalist system.

Consider the most recent IBM Global C-Suite study, which took the temperature of 5,247 business leaders from 21 industries in more than 70 countries. The IBM team found a cadre of “Torchbearers” that were better prepared to survive and thrive in the coming age, for reasons that make the case for servant leadership.

Among the most important traits that these companies (which comprised about 5% of the total respondent pool) shared were a belief in decentralized decision-making and a focus on engaging deeply with their customers and broader ecosystem — an “ecocentric, not egocentric, perspective.”

These Torchbearer traits are not just driving performance at the heights of industry; they are also at the heart of servant-leader startups and small businesses that I have encountered first-hand in my work with MBAs Across America over the past three years.

I will never forget meeting Sarah Calhoun, the founder of Red Ants Pants and a former Montana Entrepreneur of the Year. Her business has grown to be a category leader by making workwear for women who need pants as resilient as they are. She also launched what is now one of the largest music festivals in the region, drawing 14,000 attendees to a dusty cow pasture last year.

But when you ask Sarah why she is so committed to her mission, she won’t say anything about publicity or profit. She will tell you about creating a product that truly empowers women, and building a company that can support revitalization in rural America.

But when you ask Sarah why she is so committed to her mission, she won’t say anything about publicity or profit. She will tell you about creating a product that truly empowers women, and building a company that can support revitalization in rural America.

To be sure, entrepreneurs like Sarah are serious about being profitable. But just like the IBM Torchbearer CEOs, these folks share a fundamental commitment to serve first — to make lives better, make communities stronger, and make purpose the new bottom line.

These are core values of servant leadership, which is not simply a fad. Nor is it solely an approach for those who are naturally predisposed to preach the social responsibility of business. No, servant leadership is an evolutionary trait that will determine which CEOs, which companies, and which societies survive the challenges to come.

How might we begin this work? My advice is simple: hit the road. The MBAs Across America movement was born on an 8,000-mile road trip through this country, where my cofounders and I received an education that Harvard Business School, for all its merits, could never have given us.

In cow pastures and cafes, barber shops and breweries, we learned that you can’t serve those you don’t know, and you can’t solve what you don’t see.

You don’t have to get in a RV, but you do have to get out of the office and into the real lives that your servant leadership might change. The experience will undoubtedly change you in return, and open new possibilities for personal growth and social transformation.

In cow pastures and cafes, barber shops and breweries, we learned that you can’t serve those you don’t know, and you can’t solve what you don’t see.

It has been said that business is to this age what the church was to the middle ages, and I believe that we are now, as the church was then, in desperate need of a reformation. If it is to come — if a new breed of servant-leaders will bring it — it will be in the spirit of the song that was a favorite in my childhood church: Lord, send a revival, and let it begin in me. 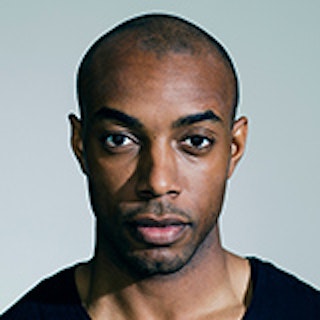