A Conversation with Henry Kissinger, Former Secretary of State

After his Forum on Leadership keynote interview in April, former Secretary of State Henry Kissinger did a quick-take interview with The Catalyst in the Bush Center Auditorium Green Room.

In this interview conducted just weeks before his 96th birthday, Henry Kissinger points his ever-sharp mind toward the numerous challenges facing the world today.

You have raised questions about artificial intelligence. Do you think AI as well as other advances in technology offer a new way for authoritarians to exercise control over their people?

I think AI presents challenges to the traditional view of human consciousness. There are aspects of AI that develop by its own inner momentum and then have to be absorbed by human consciousness. Last year I wrote an article in which I pointed out that up to now philosophers and religious leaders would put forward concepts that science would then implement. With artificial intelligence it could be the other way around. It presents realities at least in some of its manifestations.

Do you think that we are seeing a rise in authoritarianism? If so, what do you think is creating that?

Problems are becoming more and more complex. You now see that laws passed by the Congress are hundreds of pages long, which means the average person cannot absorb it fully.  So ,the extent that people develop the sense that problems are being dealt with by elites that are not responsible or responsive, then there is a growing temptation.

Do you think Russia and Vladimir Putin have created a new playbook for existing authoritarian regimes?

No, I don’t think they have created the playbook, but they use it.

This year marks the 70th anniversary of NATO. What is your assessment of the alliance today?

I lived in the period when NATO was created and at that time everybody was conscious of the threat and everybody had a memory of how America saved Europe. Now we are 70 years beyond that point, so the majority of people in most of the NATO countries have never lived in a non-NATO world. They don’t know what it rescued us from. NATO once dealt primarily with Europe. Now the threats to the peace of the world are global.

What gives you hope about the world?

What gives me hope is that if we want to survive in a democratic world we absolutely have to solve these problems. In our history we have found ways to solve them, so that’s the first thing that gives me hope. And secondly, the problems are becoming more and more apparent and I just have to assume that societies with the great institutions that we have, and that the Chinese have in a different context, are not going to permit any of these dangers to develop. 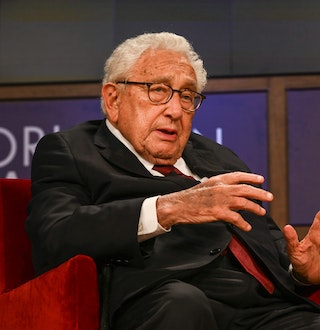