Freedom from Fear: Not in North Korea

An Essay by Melanie Kirkpatrick

The Korean Peninsula is divided into two countries whose people could not face more drastically differing fates. While South Koreans enjoy economic prosperity and civil liberties, North Koreans live in a world with no freedom of speech, no freedom of religion, and widespread malnutrition.

Seventy-five years after Franklin D. Roosevelt delivered the State of the Union address that came to be known as the Four Freedoms speech, the freedoms he enumerated, and the lack of them, are embodied in a single, divided country: Korea.

Today, freedom flourishes in the southern half of the Korean Peninsula, where the Republic of Korea is one of the world's most democratic and prosperous countries. Its 50 million people live under the rule of law and enjoy the full range of civil liberties.

In the North, by contrast, lies the so-called Democratic People's Republic of Korea, the world's last closed totalitarian state.  North Korea ranks at the bottom of every measure of freedom -- economic, political, religious, civil. North Korea's 25 million people lack the freedoms Roosevelt spoke of: There is no freedom of speech.  Religion is forbidden. Want is widespread, with malnutrition -- even, at times, starvation -- being the norm.

North Korea's 25 million people lack the freedoms Roosevelt spoke of: There is no freedom of speech.  Religion is forbidden. Want is widespread, with malnutrition --even, at times, starvation -- being the norm.

So, too, North Koreans lack Roosevelt's fourth freedom: the freedom from fear. Fear is an everyday fact of life in North Korea. It is the means by which the current despot, Kim Jong Un,  enforces his rule -- as did his father, Kim Jong Il, and his grandfather, Kim Il Sung.

As in other totalitarian countries, the Kim family regime enforces its power through a practice of arbitrary arrest and detention. The regime operates a vast network of prisons and detention centers, the worst being the six known political prisons, where an estimated 120,000 people are held in conditions are so abysmal that many never return home. Political crimes can include possessing a Bible, listening to a South Korean pop song, creasing a photograph of Kim Jong Un, or attempting to make a cell phone call outside the country.

Public executions are another means of regime control. A United Nations report in 2013 called them "one of the dreadful tools" in the regime's rule by fear.  As we have learned in recent years from testimonies by North Koreans who have escaped, even children are required to watch as men and women are hanged or shot. The onlookers understand the message the regime is sending: Express disagreement with the rulers and that could be you standing in front of the firing squad.

Public executions are another means of regime control. A United Nations report in 2013 called them "one of the dreadful tools" in the regime's rule by fear.

Another of the dictatorship's "dreadful tools" is its policy of punishing the families of transgressors. Under a diktat laid down by North Korea's founding despot, Kim Il Sung, offenders can be punished unto three generations. That is, if you are sent to the gulag for a perceived political crime, your parents, your spouse, and your children may go with you.

The Bridge of Freedom in Paju, Korea got its name when 13,000 war prisoners shouted "Hurray Freedom!" as they returned home crossing the bridge following the Armistice Agreement in 1953.

The Kim-family regime's rule by fear extends even to North Koreans who escape. It is a crime to  leave the country without permission, and the regime sends agents into neighboring China to kidnap and forcibly return home North Koreans who have fled. Agents of the regime also infiltrate South Korea. Hwang Jong-yap, the highest-ranking government official to defect, survived several assassination attempts. Kim Seong-min, who runs a Seoul-based radio station that broadcasts to the North, travels with a bodyguard and keeps the location of his office secret.

The Kim-family regime's rule by fear extends even to North Koreans who escape. It is a crime to  leave the country without permission, and the regime sends agents into neighboring China to kidnap and forcibly return home North Koreans who have fled.

North Koreans who have escaped usually prefer to live outside the public spotlight out of fear of calling the regime's attention to them. Should they use their real names or allow themselves to be photographed, they fear they will endanger their families back home.

Kang Su-jin, who now lives in South Korea, describes how her husband and daughter were forced to leave the relative luxury of their home in Pyongyang and shipped off to the countryside as punishment for her decision to leave the country. Diplomats assigned abroad are sometimes required to leave behind a son or daughter as hostage. They know that if they dare to defect, the price of their defection will be the life of one of their children.

Fear is also the means by which Kim Jong Un ensures the loyalty of his top aides. Since taking power in 2011, the young dictator has reportedly executed 70 high-ranking officials, including his own uncle -- a sign of extreme ruthlessness in a society that places a high value on family ties.  In August, South Korea reported the execution of a vice premier whose crime was showing disrespect to Kim. The vice premier reportedly slouched or fell asleep during a meeting at which Kim presided.

Using fear on the world stage

In his Four Freedoms speech, Roosevelt defined the freedom from fear as a "world-wide reduction of armaments" to the extent that "no nation will be in a position to commit an act of physical aggression against any neighbor -- anywhere in the world." By this measure, too, North Korea qualifies as a fear-monger. Its decades-long program to acquire nuclear weapons and the means to deliver them makes it a threat not only to neighboring South Korea and Japan, but also to the United States.

[North Korea’s] decades-long program to acquire nuclear weapons and the means to deliver them makes it a threat not only to neighboring South Korea and Japan, but also to the United States.

Norman Rockwell's 1943 illustration of "Freedom From Fear" for the Saturday Evening Post depicts a mother and father tucking their small children into bed. The children appear healthy and well fed. The father is carrying a folded newspaper, on which the viewer can read part of a a headline reporting on the war in Europe. There's a light over a staircase that is partially visible in the hallway outside the children's room.

It is a tranquil, ordinary, domestic scene of American family life. It depicts a way of life that would be familiar in South Korea, where children don’t go to sleep hungry, parents are at liberty to express their opinions, and no one worries that government agents will storm up the staircase in the middle of the night to take them and their families away to prison.

But it is a scene that would not be recognizable to North Koreans, for whom who freedom from fear is an unimaginable state of mind. 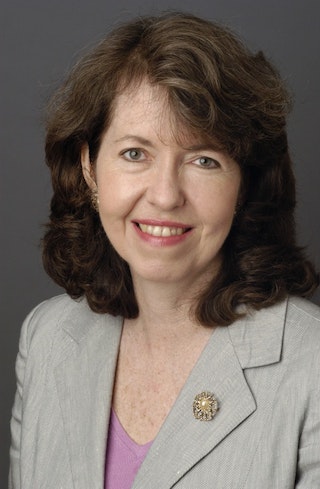