Religion has long been a source of conflict in the world, but once-fighting religions have found peace in the past.  Rabbi  Lord Jonathan Sacks explains that the road toward peace begins with the realization that every person desires the freedom to practice his or her religion as deeply as every other person.

The winner of this year’s prestigious Templeton Prize, Rabbi Lord Jonathan Sacks is outspoken about the fact that violent extremism does not go with religion. The author of Not in God’s Name: Confronting Religious Violence, Sacks spoke with The Catalyst about the decline of religious freedom. Yet he also explains why he is optimistic that Jews, Christians, and Muslims can meet as respected and cherished friends.

How would you assess religious freedom today, especially with religious conflict being alive in parts of the world?

It is looking worse than it has for many years. Religious freedom is at risk in probably more than half of the 193 member-countries of the United Nations. Religion has become, sadly, in the modern age or post-modern age, the root issue in many ethnic conflicts.

We saw that in 1992 in Bosnia and in 1999 in Kosovo. It’s become the point at which groups that live together quite peaceably become divided and that’s been the case in many parts of Africa, Asia, and the Middle East. We are living in a world where religious freedom is looking more vulnerable than we ever believed it would be in the 21st century.

Religious freedom is at risk in probably more than half of the 193 member-countries of the United Nations. Religion has become ... the root issue in many ethnic conflicts.

You have written extensively about the three Abrahamic faiths -- Judaism, Christianity, and Islam -- being a force for good. How do you see them being part of the solution in some of these contentious regions?

I wrote my book, Not in God’s Name, because I felt this was a very deep and intractable issue. Given that the three faiths, truly or metaphorically, trace their descent from Abraham, they are in a sense part of the same family. But the thought that a common descent might bring us together has historically not been the case. Jews, Christians, and Muslims have traditionally been estranged and, in some cases, very hostile toward one another.

I wanted to trace that to its roots, given that these are longstanding tensions. I traced it back to the story that each of the three Abrahamic monotheisms tells about themselves and who they are.

My view is that if religion is going to become a source of conflict again in the modern world, we will have to go back to these narratives and see if we can read them a different way for the 21st century. That is what I have tried to do.

What would it look like if we read them a different way?

We would start with the predicate that divine love is not based on the model of scarcity. That model may be true in the animal kingdom, where birds, for example, operate on a pecking order. If you are older, bigger, and stronger, you will get more of the scarce food. But basing divine love for humans on that model makes no sense theologically.

We have to read more deeply those biblical narratives about sibling rivalries, of which there are five in Genesis: Cain and Abel, Isaac and Ishmael, Jacob and Esau, Joseph and his brothers, and Leah and Rachel.

I have gone below the surface and shown they are literarily constructed in such a way that we have to re-read them more deeply than we do on the surface. In the end, we see God is very careful to bless the one who is rejected or who feels rejected.

Now that is a fairly radical theology because the last time we had major wars of religion, at least in the West, was in the 16th and 17th centuries. And that was resolved not by close readings of biblical narratives but by people like Hobbes, Locke, and Spinoza.

The Middle East and other parts of the world are going through a process of de-secularization now, but that is not going to be very easy to do.

[Religious wars] were resolved not by close readings of biblical narratives but by people like Hobbes, Locke, and Spinoza. They proposed a separation of the civic authority from religious authority. In American terms, you would call that the separation of church and state. It meant depriving religion of power.

Does Europe’s growing secularization make it harder for a follower of any religion?

I think it does. It also has made it harder for European nations, or the European Union, to construct their own identity. I don’t think Europe actually set about asking, what does it mean to be a European? There was talk at various stages about “the soul of Europe,” but Europe never went down the road of clarifying that. It very specifically left any reference to religion out of its several self-definitions.

This is really the issue here. Woodrow Wilson understood, and, my goodness, the founders and pilgrims of America understood, that religion is about identity and identity is always particular. Whereas Europe has tried to define itself in terms of procedures and abstract values, procedures and abstract values tend to be universal and not particular.

They deal with things like how do you run a liberal democratic state? The answer is you create as much freedom for everyone to live as they choose as long as they don’t harm others. You do this in terms of the modern economy. We are not going to tell you how to choose but we are going to create a situation where there are a lot of things to choose from.

The modern institutions on which the contemporary West depends does not answer the three questions that any seriously self-reflected human being will ask at some time during their lives: Who am I? Why am I here? How then shall I live? And those questions can’t be answered in terms of science, technology, the market economy, or the liberal democratic state. That is why people are turning back to religion.

The modern institutions [do not] answer the three questions that any seriously self-reflected human being will ask at some time during their lives: Who am I? Why am I here? How then shall I live? And those questions can’t be answered in terms of science, technology, the market economy, or the liberal democratic state. That is why people are turning back to religion.

If God’s love is infinite, is that the beginning for followers of religion to learn to hear the viewpoint of the other? We tend to be living in a world where there is not a lot of understanding of the other point of view.

We are living in a world in which there is a great deal of speaking and almost no listening. That is the problem. Can I listen to the other? Can I enter into his or her world?

That worked in a world where most people, most of the time, were mostly surrounded by people like them. It doesn’t work at all in a world you will meet more ethnic diversity walking down the street in every capital city and every major Western city than an 18th century anthropologist would have met in a lifetime.

We are not very good at dealing with the other. In my mind, the biggest signal of hope is the fact that the Catholic Church went through this long period of soul-searching that Pope John XXIII initiated in the early 1960s. It culminated in Nostra Aetate, or In Our Times, in 1965 under Pope Paul VI. That redefined the Catholic Church's relationship with other faiths but specifically with Jews.

I wouldn’t be an optimist if I had not seen it happen somewhere. But it has happened. Today, Jews and Catholics meet as respected and cherished friends after centuries of meeting as strangers to one another.

Today, Jews and Catholics meet as respected and cherished friends after centuries of meeting as strangers to one another.

In a recent speech you said, “No force on Earth can defeat those for whom freedom is engraved on their hearts.” What does that mean and how does that apply to freedom of religion?

Even Thomas Jefferson, whom in some respects may have been the least religious of the great Presidents, refers to it in his Second Inaugural. He actually refers to the exodus. That is part of the American story. It provides the imagery for Jefferson and Benjamin Franklin in 1776 when they did their respective designs for the Great Seal of the United States.

Jews, Christians, and Americans were born out of that fundamental Judeo-Christian narrative that says the supreme power intervened in history to liberate the powerless. That defines religion as a force for freedom. And we know from the history of martyrs in early Jewish history and early Christian history that they were willing to do anything, including sacrificing their lives, for the sake of religious freedom. It has always won the final battle.

You wrote in the Daily Telegraph that “society is woven out of shared ideals.” How can the major religions contribute to those ideals?

Something very profound happens when somebody who is very strongly religious thinks to themselves that it is terribly important for me to be free to live the way I feel I ought. There comes a moment when somebody like that realizes the other guy, whose religion is different from his, cares about his religion as much as I care about mine. And just as I would like to be free to live my religion, I have to guarantee his freedom or her freedom to live according to their religion.

At that moment, something happens. There is a tipping point in which soul touches soul across the boundaries of faith and we become allies in the fight for religious freedom, despite the facts our faiths are very different.

There comes a moment when somebody like that realizes the other guy, whose religion is different from his, cares about his religion as much as I care about mine. And just as I would like to be free to live my religion, I have to guarantee his freedom or her freedom to live according to their religion. 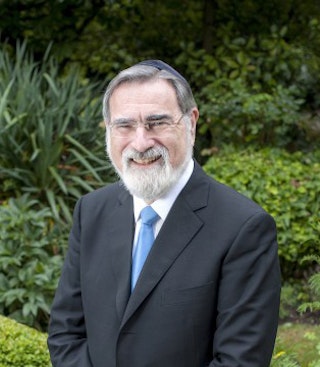