A Conversation with General Michael Hayden

During his tenure at the CIA and National Security Agency, General Michael Hayden witnessed national security needs change dramatically.  The question now is, how can the U.S. prepare for threats from both established nations and non-state actors?

When FDR delivered his Four Freedoms address in 1941, freedom from fear meant freedom from fear of tyrannical state leaders. But today we live in a world with plenty of non-state actors, such as ISIS. How has this shift changed the conception of threats to personal freedoms?

For the most part, that’s just awesome. You and I are so much more in power to do things for ourselves. Previously, we had to rely on very large institutions or even states to perform certain things. They were the only ones capable of performing those tasks.

There’s a dark side, though. The evil things that we used to associate only with malevolent state power are now within reach of sub-state groups, gangs, even individuals. That’s because of this inter-connected, powering-down kind of world.

The evil things that we used to associate only with malevolent state power are now within reach of sub-state groups, gangs, even individuals. That’s because of this inter-connected, powering-down kind of world.

I’m old enough to remember when making a phone call was such a complicated undertaking. You could only trust it to a government or a government-controlled monopoly. I’m old enough to remember when, in my own line of work, only two nations took pictures from space. And only one of them did it very well. And I can go home now on my own computer and look at North Korea with sufficient resolution to determine whether or not they are stacking the Taepodong Missile.

So, I’m far more empowered. I’m also old enough to remember I never lost any sleep over a religious fanatic living in a cave in the Hindu Kush. But that kind of destructive power we used to associate only within nation-states is now within the reach of these other kinds of threats.

You see terrorism, trans-national crime, cyber threats thriving in the absence of state authority. A state can use any of those three things but none of them need a state in order to represent a clear and present danger.

Are these non-state actors here to stay, or are they a temporary phenomenon?

They’re here to stay. Major tectonic shifts are going on.

We are seeing the melting down not just of the post-World War II order, where we saw the emergence of international institutions like the IMF and the World Bank, but we are seeing the melting down of the post-World War I order. We are also seeing a bit of falling around the edges of the Treaty of Westphalia, which is the western world’s agreement that we are going to organize ourselves into nation-states and separate the sacred from the secular.

This is a broad condition. I don’t think it’s reversible. Smart people are going to have to live with these new realities. How do we create an international order sufficiently strong for people to prosper?

I’m not being an American exceptionalist here, but, frankly, how do we create the kind of environment the way the United States did as a nation-state power for the last three quarters of a century? We’ve made our mistakes, but, by and large, we’ve created a benign environment for the rest of the world to prosper. Now how do we – the big we – create that kind of environment in a completely different model?

We’ve made our mistakes, but, by and large, we’ve created a benign environment for the rest of the world to prosper. Now how do we – the big we – create that kind of environment in a completely different model?

First of all, it’s domestic. All the things we have to defend ourselves with now were pretty much hard- wired in 1947. We harvested all the lessons of World War II, the last great conflict of the Industrial Era. The National Security Act of 1947 created the CIA, National Security Council, Secretary of Defense, Joint Chiefs of Staff, and America’s Air Force. We are hard-wired to deal with a world in which malevolent state powers are a problem.

We haven’t settled the argument yet. Renditions, detentions, interrogations, targeted killings, state secrets, electronic surveillance. The list goes on. We’re still arguing among ourselves over them. Once we get it sorted out here, we are going to have to expand that to a more international conversation.

All of the above. Every one you mentioned is coming out of one of the world’s great monotheisms – Islam. So, this does have something to do with Islam. But let me quickly point out, it’s not about all Muslims. Yet there is a struggle going on within Islam that mirrors the European struggle in the 17th century that ended up in the Treaty of Westphalia and all those other things I just described.

On October 10, 2015 North Korean leader Kim Jong Un declared that his country was ready to stand up to any threat posed by the U.S. (Wong Maye-E/AP Photo)

This great monotheism is having this debate about whether it accepts the nation-state system created by Europeans. Does it accept the separation of the sacred and secular the way the Europeans did? Does it accept divorcing the course of the power of the state from questions of theology?

I don’t know the answer. We’ll see what this great monotheism does.

How do nation-states like the U.S. deal with those operating in a post-nation-state reality?

That’s really the issue. Let me bring it down to something specific. The essence of al-Qaeda’s way of war is a complete rejection of what is the core of the Geneva Convention, which is the separation between combatants and noncombatants. They’ve rejected that for their victims and they’ve rejected it for themselves. In their eyes, every believer is a warrior.

Yet, here we are, living over in a nation-state structure that treats Geneva as if it had come down from Sinai chiseled on tablets.

The essence of al-Qaeda’s way of war is a complete rejection of what is the core of the Geneva Convention, which is the separation between combatants and noncombatants. Yet, here we are, living over in a nation-state structure that treats Geneva as if it had come down from Sinai chiseled on tablets.

A moment ago I talked about the domestic argument. Now, you have the international argument, with Americans thinking one way when it comes to dealing with al-Qaeda and even our best friends in Europe disagreeing with how the Americans have decided to go after al-Qaeda.

I meant what I said earlier, tectonics are shifting. It is generational before things settle down. It’s not that the Air Force will be bombing and strafing for 30 years. But the removal of Bashar al-Assad in Syria  and the death of [ISIS leader] Abu Bakr al-Baghdadi, which would be good things, are not going to stop this.

In your book, you essentially say we all want to be secure from threats but we also want to have the right to privacy. How do you balance that?

It is always a work in progress. There are never permanent solutions.

Privacy is the line we continually negotiate between ourselves as unique creatures of God and ourselves as social animals with responsibilities to the broader community. It is a continuous negotiation as to where that line is appropriate at this point in time.

I moved the line personally on the afternoon of September 11th, but fully within my authority as the director of NSA. We started doing things differently because “reasonableness” had a different meaning after the attacks.

We will just continue to negotiate that line?

Free people will negotiate that line publicly through the democratic processes. A point I make in my book is that our security and our liberty are both virtues.

These technologies are powerful in a good way...

But they are going to keep exploding over time and we just have to keep maintain that line?

Here’s the magic. We need to better align our technology, our laws, and our values -- all of which change at dramatically different speeds.

How do you do that?

You want to apply your values to the new technological environment.

If you look three, five, seven years down the time-line, I begin to worry about a group of states that I call ambitious, brittle, and nuclear: North Korea. Pakistan. Iran. You can throw Russia in there.

Then, you go out 10, 15 years, and you have managing the evolution of China. I don’t have to fix that tonight. And it’s indifferent to what happens at the TSA checkpoint at D-FW. But it is fundamentally the most serious.

As you talk, it seems that terrorism is a concern but perhaps not as dramatic a concern as something that nation-states can do against us. Is it the case that, when thinking about freedom from fear, we still have to deal quite a bit with nation-states?

It’s all of the above, but with a new flavor. The new flavor is the threat from non-state actors.

The world has a great history, not very happy, of emerging powers and status quo powers and how they get on. We don’t have experience dealing with this new flavor. 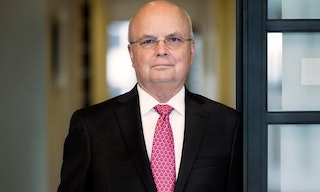