FDR Spoke for Everyone in the World

Essay by Jeffrey A. Engel

Trying to convince Congress to join arms and protect democracies, FDR delivered the Four Freedoms speech he believed everyone in the world ought to enjoy. Today that debate continues -- can freedom exist everywhere?

President Franklin Delano Roosevelt delivers his 1941 State of the Union address to a Joint Session of Congress. (Photo by Library of Congress/Corbis/VCG via Getty Images)

Everyone knew what he was there to discuss.

Franklin Delano Roosevelt, the 32nd President of the United States, only recently re-elected to an unprecedented third term, had been saying for weeks that nothing in the nation’s history compared to the crisis now at hand. The world was at war.  And war, and the world, crept ever closer to American shores.

He was there to issue not only 1941’s State of the Union Address, but also a call to arms.  Offered nearly a year before the United States would formally enter World War II, his words that January day explained why Americans, though far from Europe and Asia’s battlefields, would in time have to sacrifice and strive to make and keep the world safe for democracy.

Four freedoms in particular defined America, Roosevelt said, each under assault from tyrants and fascists around the world in their own countries. Each therefore threatened Americans as well should those despotic powers triumph.  With these freedoms, Americans would retain and ultimately expand their way of life.  Without them, America had neither meaning nor hope.

Four freedoms in particular defined America, Roosevelt said, each under assault from tyrants and fascists around the world in their own countries.

“The first is freedom of speech and expression,” Roosevelt intoned. “Everywhere in the world.

“The second is freedom of every person to worship God in his own way — Everywhere in the world.

“The third is freedom from want — which, translated into world terms, means economic understandings which will secure to every nation a healthy peace time life for its inhabitants — Everywhere in the world.

“The fourth is freedom from fear —which, translated into world terms, means a worldwide reduction of armaments to such a point and in such a thorough fashion that no nation will be in a position to commit an act of physical aggression against any neighbor — Anywhere in the world.”

It was those last clauses, the “everywhere” and the “anywhere,” that both infuriated his critics and made the speech necessary.  Roosevelt called that day for a massive rearmament program, after nearly two decades of shrinking military budgets in the wake of World War I, and for an unprecedented level of aid for Washington’s allies overseas.

It was those last clauses, the “everywhere” and the “anywhere,” that both infuriated his critics and made the speech necessary.

For a man who had just two months before won a third term, something George Washington had never contemplated, and whose critics saw in his New Deal policies an expansion of state power likely to lead to freedom’s erosion, FDR’s latest grasp for power forebode an end to the very freedoms he claimed to defend.  “Mr. Roosevelt today committed an act of war,” the St. Louis Post-Dispatch intoned. “He also became America’s first dictator.”

The country wasn’t even under threat, others howled, none more famous than Charles Lindbergh, the famed aviator of the 1920s. He had become both a fan of Nazi efficiency and a powerful advocate of conservatism, isolationism, and nativism.

Charles A. Lindbergh speaks at the America First rally at Madison Square Garden in New York, May 23, 1941. (AP Photo)

We should keep “America First,” Lindbergh and those like him railed. And with our enemies thousands of miles away, he said, “there are other freedoms that our president did not mention.” He included “the freedom to vote on important issues,” like whether or not the nation should commit its treasure and its blood to defend foreigners while thus endangering ourselves.

The greatest risk to freedom, Lindbergh and those like him charged, was the very expansion of the state Roosevelt claimed to require, which he’d never forsake even once the crisis had passed, and which in time would make Americans responsible for all the world’s ills for decades to come.

“We are stirred, but not enlightened, by the great phrase, the four freedoms,” University of Chicago President Robert Hutchins explained.  “Moreover we are in awe of its implications.  If we are to be responsible for the four freedoms everywhere, we must have authority everywhere.  We must force the four freedoms upon people who might prefer to do without them rather than accept them from the armed missionaries of the United States.”

Once dedicated to protecting freedom everywhere, he and Roosevelt’s own advisers warned, there might prove no end to the foreign entanglements that might follow.  “That covers an awful lot of territory, Mr. President,” Harry Hopkins worried when first hearing FDR practice his speech.  “I don’t know how interested Americans are going to be in the people of Java.”

Once dedicated to protecting freedom everywhere, [University of Chicago President Hutchins] and Roosevelt’s own advisers warned, there might prove no end to the foreign entanglements that might follow.

Roosevelt’s response explained it all, both why he gave the address the way he did, and why his “Four Freedoms” speech of January 1941 continues to resonate three-quarters of a century later.  “I’m afraid they’ll have to be someday, Harry,” Roosevelt explained. “The world is getting so small that even the people of Java are getting to be our neighbors now.”

The purpose of his speech

Roosevelt’s Four Freedoms was, ultimately, a political speech, designed to sway public opinion and Congress to his side of the era’s greatest debate: whether or not the United States should arm, and perhaps even fight, to stop Adolf Hitler and his fascist allies, or whether it should retreat behind the safety of its ocean moats.

Crucially, this question was never truly resolved. The great debate ended on December 7, 1941, not by active choice or some national consensus, but because another thrust Americans into war without their consent.  Indeed, not only did the Japanese attack Pearl Harbor a full 11 months after Roosevelt’s Four Freedoms address, but two days later Germany and Italy declared war as well.  Americans had to fight to protect their freedoms, and their very lives, whether they wanted to or not.

In time, World War II would pass, and with every passing day we lose more and more of the men and women of the “greatest generation” who served at home and aboard with FDR as their commander-in-chief.  The issues Roosevelt raised that January day however, and his four freedoms in particular, resonate just as clearly as when first offered. They remain central to our most vital social and political questions even generations later.

Most citizens today agree with his broad ideas, endorsing freedom of speech and religion, and endorsing both a world without want and without fear.  The details are the rub.

Americans endorse with near universal fervor the idea of freedom of speech and religion, unless another’s words or beliefs contradict one’s own.  All want to be free from want and to live free from fear, but how much are they willing to potentially forsake of their own personal wealth or liberty in order to guarantee a higher level for all?

We want a freer world, indeed one safe for democracy, but lament and debate the cost in blood and treasure its pursuit demands, and the places our nation finds itself fighting overseas to ensure domestic tranquility for ourselves and our allies.  More than merely unresolved, these questions remain paramount to our daily lives.

Ever since FDR’s speech, and including today, we have had serious debates about these issues. That, frankly, is how Roosevelt would have wanted it.  He believed in democracy.

To take the nation to war, be it against foreign foes or the great national enemy that was the Depression, he thus firmly believed leaders had both an obligation and an opportunity to explain themselves, their ideas and their vision, to the great mass of Americans whose lives depended upon their actions, and who largely listened intently that early January day.

To take the nation to war, be it against foreign foes or the great national enemy that was the Depression, he thus firmly believed leaders had both an obligation and an opportunity to explain themselves, their ideas and their vision, to the great mass of Americans whose lives depended upon their actions.

“As man does not live by bread alone, they do not fight by armaments alone,” he explained.  “Those who man our defenses, and those behind them who build our defenses, must have the stamina and the courage which come from unshakeable belief in the manner of life which they are defending.”  We must fight, be it in war or in peace, “for all the things worth fighting for.” Four freedoms yes, but “this is no vision of a distant millennium.”  It was instead “a definite basis for a kind of world attainable in our town time and generation.”

Seventy-five years later we have not yet reached that new millennium of freedoms guaranteed, here and everywhere around the word.  But we remain, at the least, still striving in Roosevelt’s shadow. 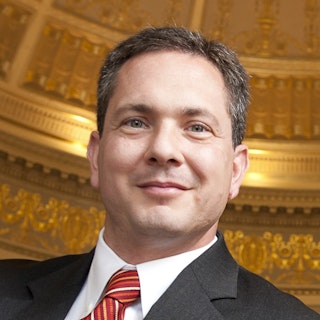 Jeffrey A. Engel, Ph.D Associate Professor of History and Director of the Center for Presidential History at Southern Methodist University Full bio