A Conversation with John Kasich, Former Governor of Ohio and Former Congressman (R-Ohio)

John Kasich made budget issues a priority during his 18 years as a member of Congress and during his eight years as governor of Ohio. His interest in fiscal responsibility actually started during his four-year tenure in the Ohio Senate, as the Republican explains in this interview with Catalyst Editor William McKenzie.

John Kasich speaks to a group of supporters during a town hall before the Wisconsin presidential primary in March 2016. (Juli Hansen / Shutterstock)

John Kasich, who sought the GOP presidential nomination in 2000 and 2016, recalls working across party lines on federal budgets, including with the Clinton White House on the 1997 Balanced Budget Act. The Ohio State graduate believes that budget writers cannot play favorites and that major transitions must be phased in, not done overnight. But he strongly believes we cannot burden future generations with unpaid debts.

Before we get into the impact of deficits and debt on states, you worked long and hard on these issues as the House Budget Committee chair.

I actually started earlier. When I was elected to the Ohio State Senate in 1978 at age 26, I made two promises. One was not to accept a pay raise and the other was not to raise taxes.

For the first two years, those were easy to keep. The Democrats were in the majority. But two years later, we Republicans were in the majority. Some Republicans decided they were going to raise taxes. I didn’t think we should, and some of my Republican colleagues started calling me names in the newspaper. I thought they had a fair point about asking me what would I do, so I decided I was going to balance the budget.

That was interesting. People showed up in my office under the cover of night, like Nicodemus, to give me points to include about balancing the budget. I learned a tremendous amount about the operations of government. My proposal was defeated handily, but some pieces later made their way into the state budget.

Then I went to Washington. The only committee I was on at first was the House Armed Services Committee. Someone asked me about unpaid federal debt, so I went to the Government Accounting Office to ask for a review. This helped me start learning about the various operations within the federal budget.

People showed up in my office under the cover of night, like Nicodemus, to give me points to include about balancing the budget. I learned a tremendous amount about the operations of government.

After six years, I found myself on the House Budget Committee and started writing my own budget. I didn’t do well on the first one. It lost 405-30, and about half of the 30 votes were from Democrats who I played basketball with and who didn’t want me to be embarrassed.

During the process, I determined that you will not be popular if you are leading on something that makes a lot of sense. But every year I did this, based on the principle that there should not be unburdened debt on future generations, the number of supporters I had grew.

When I became ranking member of the House Budget Committee in 1993, I forged a coalition with Democratic Rep. Tim Penny. We had a plan that cut one cent for every penny we added. The Penny-Kasich bill came close to winning, but we lost largely based upon Republicans and Democrats working against us.

When Republicans gained the majority in 1995, I became chair of the committee. All my earlier work on budgets paid off and I knew what to do when we were in the majority. These things are only successful when you build a team.

To me, you just do what you think is right. If people don’t like it, that’s not my problem. I wish they would like it. But if they are going to criticize and moan, that is not going to stop me from doing what I think has a noble end.

Talk about the 1997 Balanced Budget Act, which involved the Clinton White House and GOP congressional leaders like yourself. What caused that to come about?

There was basically a cultural change. There was the notion that we needed to think about the country more than ourselves.

I had always adopted the philosophy that you have no favorites when putting together a budget. Everyone gets treated the same. I don’t care who you are. You lose the high moral ground if you treat people special.

Coming together was a cultural change and a monumental achievement. It was getting people to think more about the country than themselves. We had to have people give up their special projects.

You said that budgets are about philosophy, not numbers. Is that why it is so hard to deal with the deficit and debt because we have these competing philosophies in our country?

No one ever praises you for the work product, but they may praise you for the ultimate outcome: prosperity and growth. You have to get through the long walk, and not be distracted and not have any doubts in your mind.

I don’t like raising taxes because government will spend the revenues if they get them. Democrats like to spend and so do Republicans. Only Republicans feel guilty about it, although I don’t think they do these days.

Christmas comes once a year, but it comes every day for politicians. When you cut back, people get angry.

Let’s shift to your time as governor and dealing with fiscal issues.

I had prepared for this over time. Ohio was facing a $7.7 billion budget shortfall and bleeding jobs. We assembled the right leaders and brought about dramatic change. We were running surpluses and were able to build up our rainy day fund to $2.7 billion, which helped us achieve dramatic job growth. The turnaround in our business climate also led to being able to care for the needs of people who had been traditionally left in the shadows.

While you were governor, did the federal deficit impact you?

No. I didn’t pay any attention to it.

What are the most critical fiscal issues facing states?

Health care. Medicaid. You have to constantly manage Medicaid and come up with programs where you will pay for performance and not just constantly do the same things over and over.

You also need to manage economic development programs so you are not playing with silly numbers. You need to secure pensions. And you need economic growth that you can share with everyone.

When the federal debt becomes unmanageable, it will create a calamity that will take over the state government as well. The overall economy will go down. We were always preparing for a recession so we wouldn’t be caught flat-footed. That’s why we wanted to have a surplus. They can provide a cushion when the water rises.

You mentioned pension liabilities. Some experts consider them a ticking time bomb. What is your take on that at the state level?  Are we going to hear more and more about them?

Yeah, and at all levels of government. Fortunately, we had good people in Ohio and we made hard decisions. They have been responsible. You need to do this with both parties participating. Yes, pension liabilities are a big issue.

The vast majority of states have balanced budget amendments, which vary in their degree of stringency. To what degree do they force states to deal with their fiscal realities?

They play numbers even with that. But if you didn’t have that requirement, many state budgets would not be balanced. We would be out of balance more than in balance. That is the nature of politics and politicians. Let’s call it the Santa Claus factor.

You asked in a December 2018 op-ed: “Do deficits matter? If they do, and I count myself in that corner, then the U.S. economy and all of us who depend on its well-being are in deep trouble unless we turn things around fast.” How fast is fast?

These things don’t happen overnight and they can’t be fixed overnight. You need a reasonable trajectory to realize the changes you need.

At the federal level, you have big challenges with Medicare, Medicaid, and Social Security. They are all important programs and consume a large portion of our resources. You can’t just chop them. You have to have transitions that are fair and equitable.

At the federal level, you have big challenges with Medicare, Medicaid, and Social Security. They are all important programs and consume a large portion of our resources. You can’t just chop them. You have to have transitions that are fair and equitable.

You have seen this problem as a state official, congressman, and presidential candidate. How do you make the debt a national issue?

I don’t think the debt will become a top-of-mind issue until people in the country become concerned about it and decide that we have had enough. Then, we will renew the debate and hopefully get people who know how to deal with it. I see no signs now of any leadership in either party on this issue. None. 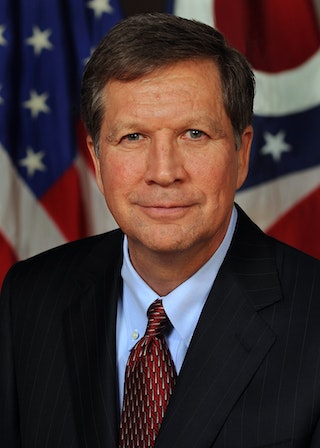