Cutting Foreign Aid is Not the Answer to Our Debt Crisis

Polls show that Americans believe foreign aid makes up 25 percent of our national budget. The reality, that it makes up less than 1 percent of the budget, is a small price to pay to help stabilize the world.

Volunteers prepare to distribute food from the U.S. to HIV and TB patients in 2006 in Uganda. (Jean-Marc Giboux/Getty Images)

In seeking to address our national debt, there is often a small but vocal consortium who set their sights on foreign assistance.

A 2019 Pew Research Center poll found that out of 12 of 13 areas of federal spending, no more than a quarter of those surveyed favored spending cuts. Foreign assistance was the only exception, although only 28 percent favored cuts in “assistance to the needy in the world.” We can certainly testify to hearing from that vocal minority, who often make the case in public forums about reducing or even ending such assistance.

As determined as they may be, that doesn’t mean we should cut foreign aid. There are strong economic, political, and moral arguments in favor of American leadership in the world. And to truly lead, America must be generous.

Not surprisingly, many Americans would rather see the federal government deal with problems at home first. Domestic needs like making housing, education, and health care affordable or fixing decaying infrastructure are priorities for many.

But even eliminating foreign aid wouldn’t do much to free up resources.

The Brookings Institution noted that opinion polls consistently report that Americans believe foreign aid is in the range of 25 percent of the federal budget. When asked how much it should be, they say about 10 percent. In fact, at $39.2 billion for fiscal year 2019, foreign assistance is less than 1 percent of the federal budget. In our view, that’s a very small price to pay to help stabilize the world.

In fact, at $39.2 billion for fiscal year 2019, foreign assistance is less than 1 percent of the federal budget. In our view, that’s a very small price to pay to help stabilize the world.

Throughout much of our history, America was frequently reluctant to lead in the world. Blessed by the isolation of the oceans to the east and west, the United States had little interest in the frequent conflicts of the Old World. America avoided alliances. Our vast size compared with the powers of Europe meant we had little need for colonial empires.

In the 20th century, America took on a new role — both by choice and necessity. We became a colonial power and belatedly entered World War I. When the conflict ended, many wanted to return to the status quo ante, withdrawing from the world to the security of our own shores.

Congress refused to allow the United States to join the League of Nations. Within the space of a few decades, Europe was again plunged into war, which expanded into World War II. While the same isolationist strand was strong after World War II, this time America rose to the challenge.

The U.S. crafted much of the postwar architecture that prevailed in the latter half of the 20th century. NATO and other alliances were established to check a rising Soviet Union and to keep democracies and other partners free from Moscow’s grip. The World Bank, International Monetary Fund, and various trade agreements sought to provide stability and growth to the global economy. For all its shortcomings, the United Nations and its related agencies were founded to establish a notion of global governance.

At the same time, America became a significant donor of foreign assistance for the first time. Most notably, the Marshall Plan of the late 1940s and early 1950s provided $12 billion (roughly 100 billion in current dollars) in assistance to the war-shattered countries of Western Europe.

Massive sums went to rebuild defeated enemies Germany and Japan. And as the Cold War developed, American aid went to the rapidly decolonizing developing world, to win hearts and minds. In the 1960s, new efforts like the Peace Corps, the Alliance for Progress, and the United States Agency for International Development, while still used in the competition with the Soviets, were established to address basic human needs such as health, agriculture, and economic development.

With the collapse of the Soviet Union and end of the Cold War, American generosity again was directed to former foes. The 1990s and 2000s saw U.S. resources pour in to the former USSR and the newly free nations of Central and Europe to reconstruct their economies and strengthen their fledgling democracies.

In addition to common misconceptions about the size and purpose of U.S. foreign aid, many critics also overlook the value. From bolstering democracy and human rights to strengthening free economies to fighting poverty and despair, foreign assistance has fortified peace and prosperity around the world.

From bolstering democracy and human rights to strengthening free economies to fighting poverty and despair, foreign assistance has fortified peace and prosperity around the world.

As documented in the Bush Institute’s new paper, Choose Freedom,  encouraging democracy and human rights is “essential to advancing American values, and security and economic interests around the world.” 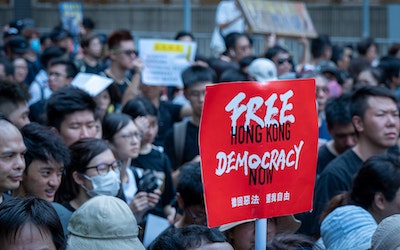 Encouraging democratization and respect for human rights globally are essential to advancing American values, as well as security and economic interests around the world. The values that underpin democracy and human rights are not just American values — they are universal ones. Read the call-to-action report

Foreign assistance has helped to transform onetime enemies like Germany and Japan into partners and allies. Once impoverished and autocratic countries, South Korea and Taiwan have joined the ranks of developed and democratic nations. Places like the Czech Republic and Poland, recipients of foreign aid just 25 years ago, are now providing assistance themselves.

And while some may incorrectly conflate reconstruction in Afghanistan and Iraq with all foreign assistance, senior military leaders often make the case that diplomacy and development can prevent the need for military intervention. Former Defense Secretary and retired Marine Corps General James Mattis put it succinctly in congressional testimony, telling lawmakers, “If you don’t fund the State Department fully, then I need to buy more ammunition ultimately. The more that we put into the State Department’s diplomacy, hopefully the less we have to put into a military budget as we deal with the outcome of an apparent American withdrawal from the international scene.”

A mother leaves a USAID-funded clinic after receiving treatment in 2011 in Farza, Afghanistan. (John Moore/Getty Images)

In cutting U.S. foreign assistance, economic needs don’t disappear. But support for American interests and values often does. Moreover, countries like China, Iran, and Saudi Arabia are content to fill the void, with little to no transparency in doing so.

Based on current estimates around levels of giving, China reigns as the largest provider of development assistance in the world. Data is limited, as China is not part of the OECD’s Development Assistance Committee, but China annually outspends the United States. Although labeled as foreign assistance, much of the support China provides is earmarked for commercial access and country-specific loan agreements, rather than development and humanitarian purposes.

Regardless, the rising influence of China and other repressive actors has offered alternate options for support, bypassing scrutiny and reform stipulations often encouraged by western lenders. As the BBC cited in reporting on a first-of-its kind analysis on China’s secretive approach to aid: “Cambodia is a recent example; independent newspapers and western NGOs have been shuttered, as Cambodian leaders' strengthening ties with China embolden them to turn away from Washington's demands to hold fair elections.”

Additionally, aid has offered opportunities for U.S. market growth. Across the past decade, nearly two-thirds of the growth in U.S. goods exports was to major USAID partners.  By encouraging free market principles, private sector development, and economic stability, aid investments have assisted in cultivating robust and growing demand for American goods and services abroad.

In addition to promoting security and stability, the protection and advancement of human dignity is (and should remain) a vital driver of U.S. foreign assistance. Simply put: It is morally right.

One of the most prominent examples is the sustained progress of the President’s Emergency Plan for AIDS Relief (PEPFAR). A “dream big” global health partnership,  PEPFAR remains the largest contribution by any country in fighting a single disease. First authorized in 2003 under President George W. Bush, PEPFAR was a direct response to the overwhelming burden of the HIV/AIDS crisis in Africa.

PEPFAR has strengthened capacity and infrastructure, ensured access to vital services, and addressed stigma, prevention, and related issues like women’s and girls’ empowerment and gender-based violence. More than that, the program is estimated to have saved over 18 million lives since its inception. Thanks to bipartisan support, PEPFAR has continued under subsequent administrations, with Congress reauthorizing the initiative three times, most recently in December 2018. 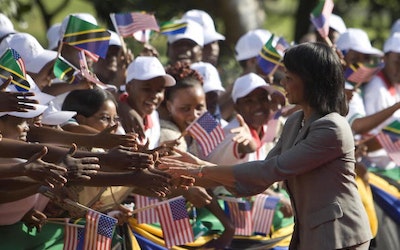 In 2001, the HIV/AIDS crisis in Africa had reached new heights. Death tolls were in the tens of millions. Hospitals were overwhelmed. And the infection rates continued to rise. The United States faced a choice: respond to a call for help or watch a generation of lives be lost. Read the oral history of PEPFAR

PEPFAR is an extraordinary example of the importance of collaboration and continued investment in the promotion of human dignity worldwide. The initiative also advanced broader policy and security objectives. As President George W. Bush noted in 2017: "When you have an entire generation of people being wiped out and the free world turns its back, it provides a convenient opportunity for people to spread extremism," he said. He said, adding: "I believe in this case that it's in our national security interests as well as in our moral interest to continue funding this program."

"When you have an entire generation of people being wiped out and the free world turns its back, it provides a convenient opportunity for people to spread extremism."
—President George W. Bush

While some may attack foreign assistance as wasteful, misguided, or taking resources away from American communities, our international engagement ought to be viewed as an investment in people – both at home and abroad. By addressing poverty, disease, and bad government abroad, the United States not only improves the human condition, but also enhances our nation’s standing and security. The temptation to withdraw within our own borders has been a recurrent theme throughout our history, today espoused in “America First” rhetoric.

But we withdraw at our own peril and in contradiction to our values.  As former Secretary of State Madeleine Albright has said, “I think Americans are the most generous people in the world with the shortest attention span.”