James A. Baker, III served as secretary of state, secretary of the treasury, White House chief of staff, and undersecretary of commerce during three different presidencies — and the Houston attorney’s skills as a negotiator played a key role in each of those positions.

The Catalyst asked Secretary Baker to look back on his time in government to explain how Washington might address seemingly intractable problems like minimizing the national debt. We particularly asked for his recollections about how policymakers reached an agreement in 1983 to salvage Social Security, which, like now, faced a fiscal reckoning.

How do you depoliticize a divisive issue, whether that is the federal debt, immigration, or some other intractable problem, so opponents can start working to resolve it?

Early bipartisan buy-in is critical. Commissions can help. A good example of that was the Greenspan Commission on Social Security reform in the early 1980s, when the leadership of both political parties – Democratic House Speaker Tip O’Neill and Republican President Ronald Reagan – were both on board with the idea of trying to find a solution.

This arrangement assured that neither side would politicize the effort. The 2010 Simpson-Bowles Commission on fiscal responsibility, whose recommendations were ignored, is to my mind a tragically missed opportunity as our fiscal debt bomb continues to tick.

Another way to finesse partisan differences is to narrow the scope of reform. The bipartisan tax reform of 1986, for example, was revenue neutral, avoiding potentially fatal debates on overall tax and spending levels.

Above all, bipartisanship means talking to your political adversaries — and, more importantly, listening. President Reagan and Speaker O’Neill may have disagreed across a range of issues.  But they knew and liked each other. And this led to trust, a vanishingly rare trait in Washington today.

Above all, bipartisanship means talking to your political adversaries – and, more importantly, listening.

Do you need a crisis to prompt a grand bargain or big compromise?

There is no doubt that a crisis or even a hard deadline can drastically improve the chances that a grand bargain can be struck. In 1981, for example, the Social Security trust funds were nearly empty and projected to run out of money within 16 years if something wasn’t done. Newspapers and television were filled with stories about the impending financial doom facing many aging Americans. The subsequent public pressure made it easier for President Reagan and Congress to reform Social Security in 1983 in a way that extended the solvency of Social Security payments for 54 years.

There are other ways to simulate a grand bargain, however, and one of them is an effective use of the bully pulpit. In 1981, Reagan was a newly-elected Republican president who worked with a House that was overwhelmingly controlled by Democrats to pass one of the most effective tax-cut bills in U.S. history.

Newspapers and television were filled with stories about the impending financial doom facing many aging Americans. The subsequent public pressure made it easier for President Reagan and Congress to reform Social Security in 1983.

During his campaign the previous fall, Reagan had made a major tax cut his top priority. Once in office, he used the power of the presidency to build support for the plan. Less than seven months after taking office, President Reagan signed the bill that encouraged economic growth.

Of course, sometime the stars are aligned just right. After the First Gulf War in 1991 and as the Soviet Union was imploding, President George H.W. Bush found his country in an enviable position. America’s leadership on the global stage was reaching a zenith. In the Middle East, many Arab leaders were eager to please the United States after we had ejected the troops of a rival threat, Iraq’s Saddam Hussein, from Kuwait. As a result, President Bush used the good will for his country to convince Israel and all its Arabs neighbors to meet for the first time to discuss peace. President Bush identified this window of opportunity and took advantage of it.

In order to reach a compromise, must parties make proposals that show they are willing to challenge their most die-hard supporters? Bush 41 did that as president by agreeing to raise taxes, but, of course, he paid the price.

There is no point in re-litigating President George H.W. Bush’s famous “no new taxes” pledge.  I’ll leave that to historians. But I will say that the economic situation had altered substantially by the time President Bush reluctantly agreed to tax increases. Sometimes you must do what you believe to be the right thing. And simply pay the political price. That’s called leadership.

Sometimes you must do what you believe to be the right thing. And simply pay the political price. That’s called leadership.

How do you get negotiators on different sides of an issue to sacrifice or swallow hard?

An important aspect of successful negotiations is the ability to climb into the shoes of the other parties at the table and understand what motivates them personally, politically, and professionally. After all, it’s understandably hard to get something from someone if doing that will hurt that person more than it helps them.

A reason President George H.W. Bush was so successful in the practice of foreign policy was his uncanny ability to understand his adversaries. He understood the situation that Soviet President Mikhail Gorbachev faced as his nation was collapsing, and so he didn’t try to squeeze him so hard that the hardliners in the USSR could take over from him.

An important aspect of successful negotiations is the ability to climb into the shoes of the other parties at the table and understand what motivates them personally, politically and professionally.

As a result, negotiations don’t always have to get down to the lick-log (as we say in Texas.) But when they do, the best way to proceed is with candor and honesty. Let your adversaries know exactly where they stand and how their intransigence will affect the question at hand and, more importantly, how a bad decision might hurt them, as well.

Does a combination of the constant news cycle, safe districts, legislators who think their job is to merely reflect their districts, and the deterioration of the center make compromise ever more elusive? Should we scale back our hopes for something on the debt?

Compromise has become more difficult — and sometimes, it seems, impossible. But we should not despair. I am fundamentally optimistic about our country’s future. I’m old enough to remember how we met challenges during the Great Depression, World War II, and the Cold War — and triumphed.

While I would prefer a grand bargain addressing our alarming fiscal position, I would support any substantial initiative to begin tackling it. And, yes, both tax increases and budget cuts should be on the table. As President Reagan said: “If I can get 70 or 80 percent of what I want, I'll take that and then continue to try to get the rest in the future.”

But let there be no doubt. If we don’t address our ticking fiscal time bomb now, we risk a crisis that will cripple the economic future of our children and grandchildren.

But let there be no doubt. If we don’t address our ticking fiscal time bomb now, we risk a crisis that will cripple the economic future of our children and grandchildren. 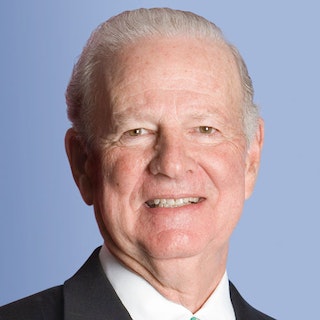