Investing in Urban Parks is Good for Cities and the Environment

Urban parks not only bring new identity and purpose to cities, but they also can be designed to improve the health of the environment through sustainability efforts.

The Cornell graduate’s love of landscapes began as a child on his family’s New York farm. In this email exchange with The Catalyst, he shares his thoughts on creating sustainable environments. They will become even more important in a changing climate, and he describes how parks can provide enjoyment for people, improve an urban center’s environment, and even create a new identity for a city.

You were quoted in The Globe and Mail as saying: If a 20th-century park “was all about observing nature,” then a 21st-century park is about ecology and resilience “and a totally different, visceral, bodily experience.” What does that mean?

I mean that people not only want to see landscape as scenery, but also feel its power by being in it. It also means that we have moved away from a purer idealization of nature to making more visible and understandable the way landscapes work and function. We see landscape not as compositions, but as functioning ecologies.

And yes, there has been a shift. Across the 20th century, millions of people moved to cities, and in many cases, they inherited parks (though we made more in that century) that were often places to see trees and flowers, but from afar.

Of course, there were exceptions. The great American park planner, Fredrick Law Olmsted, initiated this idea of landscape that I am advocating for with his 1860s plan for Jackson Park in Chicago, although it was never fully realized and only a trace of that plan exists in the park today. Following nature’s lead, he designed a park that was all about its wetness by adding lagoons and native riverine ecologies.

But that wasn’t really the model of that time, nor the century after. What we are hearing these days is that people want a more activated park experience through the range of experiences the park offers, and by the robustness of the things you can do — steep hills, climbing walls, and challenging water courses. Teens want zip lines and everyone wants to play sports in parks, and all recognize that city parks are designed, rather than a preserved piece of pre-urban land.

But cities have only a limited amount of public and private capital. How do you make the case for parks being a priority investment?

That case has been made again and again by the success of cities with strong park systems, and the increased value of park-adjacent properties. A park doesn’t have to be expensive to be good, but it does have to be thoughtful. For a park to be a place for everyone, it has to have something that everyone wants to do — from elderly bird watchers, to parents of tots, to teenagers who want to play basketball.

A park doesn’t have to be expensive to be good, but it does have to be thoughtful. For a park to be a place for everyone, it has to have something that everyone wants to do.

Whether you look at it in terms of quality of life, public health, urban ecology, or straight-up economics, a well-designed and well-maintained public park gives back much more than it takes. And parks are especially needed in neighborhoods that have less. In Houston we are planning for strategic park investment by using both our experience in what makes a great park and city-scale data to generate a menu of park locations that help serve those in need.

Potential parks are only a piece of the puzzle; a study in Houston also looked at how parks and greenways could facilitate efficient and enjoyable daily life cycles connecting transit and job centers to daily needs such as groceries, day care and parks.

You talk frequently about sustainability in landscape design. What does that mean and look like for parks?

Sustainability in landscape making refers to the many ways in which we try to preserve or even improve the long-term health of our environment (local, regional, and global) through design and management decisions. We’re interested in sustainability efforts that have the largest possible ecological impact, so we start with choices that impact the entire site, and its larger place in natural systems. But we are committed to looking for opportunities every time we make a design decision, no matter how small.

We’re interested in sustainability efforts that have the largest possible ecological impact, so we start with choices that impact the entire site, and its larger place in natural systems.

There is a great example of our work in Tulsa where we were particularly interested in how the park could improve storm water quality. We directed a large percentage of parking lot and roadway runoff through a series of below-grade infiltration basins where the soil cleanses the water before it makes its way to the Arkansas River. Most of the remaining surface runoff is then directed to a central pond where it is recirculated through a series of treatment wetlands to help uptake excess nutrients and settle out particulates. So the pond serves as a landscape feature, but is also doing real work to help improve the health of the watershed.

What importance will sustainability play as environmental issues become even more important over the next 50 years?

This topic connects with your question about priorities. As environmental concerns become more pronounced, sustainability will feel more like the necessity that it is. I’m encouraged by the fact that we increasingly see sustainability mentioned often as a goal in project briefs and that many cities have adopted sustainability goals that all new projects must achieve. At the same time, I look forward to new technologies and approaches that will allow us to keep raising the bar on what is considered sustainable.

As environmental concerns become more pronounced, sustainability will feel more like the necessity that it is.

Sustainability takes so many forms. Cisterns for storm water collection have been used for centuries, and water retention and slow release is such an important idea in ecology — it’s a central part of our design of the park at the Bush Presidential Center. There, water is collected from parking areas, stored underground in a large riprap reservoir where it is slowly expelled through an 85-foot-long limestone wall. Then the storm water flows through overland bio-swales with a specialized plant community that filters contaminants and then to the Wet Prairie, which is engineered to let water slowly infiltrate into a 250,000-gallon underground cistern. That stored water is later drawn and used for irrigation on site.

How does a changing climate affect your work? I read where you used design elements in the Brooklyn Bridge Park that would adapt to more flooding along the East River.

Michael Van Valkenburgh, James Farmer, and Klaus Desmet on why quality of life and conservation matter in cities.

We make landscapes that will adapt, to the extent possible, to whatever the future holds. At Brooklyn Bridge Park, we used stone riprap, rather than concrete retaining walls, as the standard waterfront edge. Retaining walls take the full brunt of storm surges and are prone to breaking and collapse; riprap edges, piles of giant rubble stones, are relatively porous and allow the pressure of floods to dissipate. The stones shift when slammed with waves but settle back in place when the storm passes.

You spend time studying the land and working with it. What does “working with the land” mean? And how does that shape your work? How does landscape shape a sense of place?

We sometimes forget that landscapes are alive. They look the way they do because plants adapt to conditions they find, the amounts of water available, the nutrient content, the drainage of soils. So working with the land is understanding why what we see looks like it does. Every art form, park making included, understands its materials.

So working with the land is understanding why what we see looks like it does. Every art form, park making included, understands its materials.

Our materials, however, are not just trees, dirt, and water, but the systems that they are part of. You cannot talk about how we re-engaged the land at the Bush Library without looking at the tree thickets and bottomland forests in the surrounding Blackland Prairie of North Central Texas. And what we saw there was the grouping of trees into dense thickets or mottes that were directly related to drainage patterns or soil quality changes.

These tree groupings are a very important transitional zone within the prairie ecosystem by providing habitat for birds, butterflies, and other wildlife species. This threshold of field and forest is also a critical aspect of how people experience the landscape. It provides shade and comfort on a hot Dallas day and choreographs views and vistas for our park.

We are always collaborating with our sites in order to avoid producing ready-made landscapes that feel superficial and generic. Context — whether it is ecological, social, cultural, historical, or architectural — shapes everything we do. Our designs accentuate the things that make a place unique.

For example, in Dallas, we are making a park within a functioning system of flood control infrastructure. The site itself currently reflects pure civil engineering — a straightened river channel, earthen levee walls, and a flattened floodplain. Restoring the river’s functional lift, but within its current context, demands that we work with the land and results in a park that is unique and entirely site specific.

The river became a flood threat and was sequestered from the city. A founding idea was that the park will inevitably flood and must therefore be designed to welcome the river water. The fact that the river is ever-changing isn’t something to be lamented, but an attraction to be embraced. When the park is complete, our experiences of the river will be different every time we visit, and that’s something to look forward to.

The Margaret Hunt Hill Bridge in the foreground passes over the Trinity River in Dallas. (Shutterstock.com)

You say the new Trinity River Conservancy in Dallas represents “an insane opportunity” and that the park you just described is “the coming together of a new Dallas.” How so?

Dallas was built fast and a great, centrally located park was never made. The Trinity is that opportunity. Two thousand acres right through the middle of Dallas.

When I’m in Dallas, I am reminded the Trinity River is largely absent from life in the city. Not visible, not there. The river and its floodway are unique and powerful, but they’re hard to see, hard to get to, and then there is not much to do when you do get there.

Not yet, that is. The levees have stifled people’s connections to nature and the river valley has literally become a half-mile-wide divide through the city. The park we have designed will infuse the banks of the Trinity with new life and social purpose, and that can’t help but have a profound effect on the identity of the city.

The park we have designed will infuse the banks of the Trinity [River] with new life and social purpose, and that can’t help but have a profound effect on the identity of the city.

In developing a concept, we focused on the impact of a dynamic and flooding river, viewed as an opportunity to parse program into distinct spaces. Inside the levees, resilient and flood-able park program is linked by high land forms and pedestrian bridges which create spaces for activities like fishing, barbecues, and jogging. Straddling the levees, overlook parks above the flood line offer playgrounds, basketball courts, and park buildings. These overlook parks act as the front door, an orienting and welcoming face to the edges of the city. 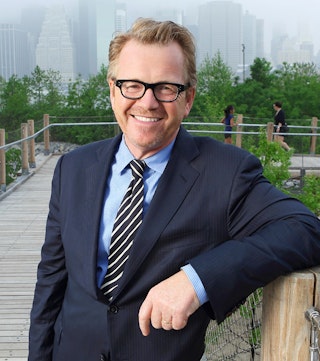