A Conversation with Miami Mayor Francis Suarez, Chair of the U.S. Conference of Mayors Environment Committee and Commissioner of the Global Commission on Adaptation

As a coastal city, Miami's future could be impacted by rising sea levels and climate change — but the city is hopeful its master plan will keep it above water.

In February, Francis Suarez, the mayor of Miami, and Ban Ki-moon, a former secretary general of the United Nations, wrote that an estimated 800 million people around the world are at risk of storm surges and rising seas. That is in addition to the droughts, wildfires, and other manifestations of a changing climate that challenge local communities.

Mayor Suarez spoke with Catalyst Editor William McKenzie about how his coastal city is adapting to realities like new sea levels, intense rainfall, and powerful hurricanes. The process starts with recognizing a problem exists. The Republican’s work on adaptation has led to him serving as the chair of the U.S. Conference of Mayors Environment Committee and as a commissioner of the Global Commission on Adaptation.

You and Ban Ki-moon wrote recently in the New York Times  that Miami is moving aggressively to adapt to climate change. So, how does climate change affect life in Miami? And how are you all trying to adapt?

Miami is experiencing three types of phenomena. First, as everyone knows, we have hurricanes that can produce six-to-eight feet of storm surge and overwhelm our seawalls. After Hurricane Irma a couple of years ago, we had billions of dollars of property three feet under water. That happened. There’s no way to deny it.

Second, we have “king tide flooding” twice a year. That is due to the orientation of the moon and the tides. We have a very porous subsoil, so the water comes from the subsoil instead of from rain. It’s basically dry flooding, which of course is an oxymoron. You can see the water. It is quantifiable.

Third, we are seeing a significantly more intense rainfall. We know that because of our  drainage capacity. In theory, our drainage systems should not be overwhelmed by rain more than once in five years. But we’re seeing five of those rains in a year. We are literally 25 times under capacity.

How is Miami trying to adapt to what it sees?

Let’s start with the dry flooding. We have used drone technology to map out the most severe areas where it’s happening. We can’t plug all the holes in our porous subsoil, but we can control the back flow of tidal waters. We have put in valves that prevent tidal water from coming into the bay from the ocean and back into our city.

When it comes to hurricanes, where a tidal surge can put a significant part of our real estate under water, we have basically come to the conclusion that the only way with Mother Nature is to reverse what she is doing. We’ve created resilient pump stations that will suck out the water that is coming in and push it back out.

We want to make sure that we’re pumping out clean water. We don’t want dirty water in Biscayne Bay. This is a bipartisan issue in Florida. Everyone understands our bay and evergreens are an economic engine. So, this is not just an environmental matter. It’s about water quality. It’s about growth. And it’s about economic principles that are critical to our livelihood.

[T]his is not just an environmental matter. It’s about water quality. It’s about growth. And it’s about economic principles that are critical to our livelihood.

We also are creating natural reservoirs as we pump out that water. And we are using our parks as natural reservoirs. When our waterfront parks are overwhelmed, the water will pool in areas so it doesn’t look disorderly. The principle is to think of water as an asset. People who are upset by our climatic phenomenon often think of water as an enemy. But we don’t see it that way.

We don’t like to overregulate or overtax. We only tax and regulate when necessary, which leads me to my next point. As a community, we decided to expand an existing tax at no additional cost and use it to raise $200 million for resiliency through the Miami Forever Bond. The bond initiative will help us get to the third strategy, which is updating our inadequate drainage system.

We are working with FEMA, the American Flood Coalition, and the Rockefeller Foundation to build a strategy that will make us a national and world model on adaptation. Of course, the Netherlands has been dealing with these issues for 800 years. But I would say we’re the model in the United States. We’re ground zero for climate change but we’re also the model for adaptation.

The Miami Forever Bond supports infrastructure projects to keep Miami dry — such as pumps, elevated roads, and seawalls. (via miamiforever.org)

How should businesses respond to the need for adaptation? What is in it for them?

Existing. That is what is in it for them.

This is an existential threat on three levels. The first is branding. Miami is low in taxes, sunny, beautiful, and lower in density compared to New York. The only argument for not investing in Miami is that the city is going underwater. So, we have to counter-brand, which is why the Miami Forever Bond was so important. It is our message to the world that we’re not burying our head in the sand. We acknowledge that there are issues, and we’re dealing with them.

The only argument for not investing in Miami is that the city is going underwater. So, we have to counter-brand, which is why the Miami Forever Bond was so important.

The third part is providing an infrastructure that will lead to a Miami forever. I am the first mayor of Miami that was born in Miami. And I have a five-year old and a one-year old. I want their grandchildren to grow up in Miami. My job is to make sure more Miami-born mayors are coming after me.

In depth: Adaptation in Florida 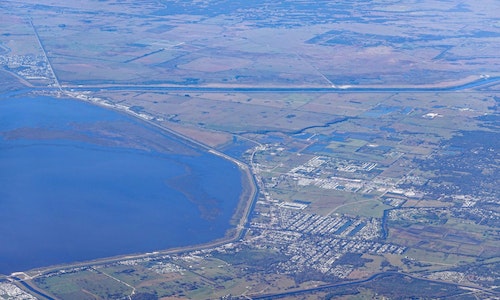 You must involve residents. We had a public vote where we had to convince residents of the wisdom of what we were doing. If you don’t aggressively communicate what you’re doing, why you’re doing it, and what the return on investment is, I don’t think you’ve got a shot.

In our case we were communicating very effectively. But we also benefited from Irma hitting. It got people’s attention.

What is the greatest barrier to adaptation, whether in Miami or elsewhere? Money? Understanding the problem? Lack of expertise?

But you first have to convince people to give you those resources. They can only come from a variety of sources: the federal government, the state government, your county, or you tax your own community.

We’ve tried to lead by example. We self-tax and now we’re going to go to those other entities and say, “We’ve got skin in the game, so we need you to match our dollars or provide some level of matching. You should help us build a scalable national model that you can take to the rest of the world.”

What would you say to other cities about how they can create priorities? How do they make sure they are using money effectively?

First, we recognized there was a problem. We created a master plan for our storm water and took account of climatic events like sea-level rises.

Second, we created a committee that specialized in addressing the problem. Third, we updated our plan. Fourth, we created a funding model. Fifth, we convinced the community to fund it. Now, we’re in the sixth stage, which is finalizing our plan and spending. Frankly, this is the easiest part. The hard work is behind us. Now, we have to deliver.

The last piece is you need a return on your investment. You need to be able to go back to your residents and say, "This is our return on the investment dollars that you gave us. This is what we could do with more, especially since we have $200 billion worth of property exposed to climate change." 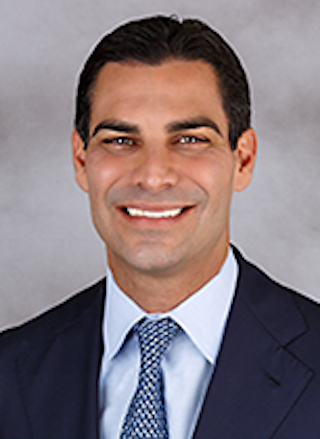 Francis Suarez Mayor of Miami and Chair of the U.S. Conference of Mayors Environment Committee and Commissioner of the Global Commission on Adaptation Full bio