Young Conservatives Want a Voice on the Environment

An Essay by Benjamin Backer, University of Washington Junior and President of the American Conservation Coalition

Young advocates have solutions on how to change the narrative to make environmental conservation a bipartisan issue again.

I grew up spending most summer days on the docks of Lake Minocqua, a small-town lake in northern Wisconsin. A tranquil place, my father and grandfather taught me the importance of environmental stewardship at an early age. From forest expeditions to fishing trips, I saw first-hand the delicacies of nature and our duty to conserve it. I witnessed how a single person could choose to negatively affect their environment, or leave it better for future enjoyment. Interacting with nature from a young age pushed me to prioritize environmental stewardship in everything I do today.

Interacting with nature from a young age pushed me to prioritize environmental stewardship in everything I do today.

This personal experience is one that millions of other Americans can likely relate to. No matter if you grew up in the plains of Kansas, beaches of South Carolina, mountains of Montana, or deserts of Arizona, chances are you’ve learned to adore the outdoors.

Despite those experiences, politics have gotten in the way of environmental stewardship and are used as a wedge to divide people. And much of the environmental movement has embraced a hands-off approach to conservation that passes off responsibility and often includes overregulation and limited involvement from important communities.

That’s why, as a college political activist who has been involved in the conservative movement for over a decade, I have begun working with other conservative college students to change the dialogue. Our aim is to make environmental conservation bipartisan again.

I have begun working with other conservative college students to change the dialogue. Our aim is to make environmental conservation bipartisan again.

In the era of climate change reform, environmental stewardship seems to be one of America’s most divisive issues. But it wasn’t always this way. Conservatives have embraced environmental sustainability for over a century, starting with Teddy Roosevelt — the father of our National Park System. President Ronald Reagan set aside over 12.5 million acres of public land during his presidency. President George H.W. Bush protected more public land than any president in recent history. And President George W. Bush designated nearly 140,000 square miles of the Northwestern Hawaiian Islands as a Marine National Monument.

Today, however, conservatives rarely talk about environmental sustainability and conservation as a focal point of their ideals. As a result, many Americans have been wondering when — and why — this discussion became so polarized. It’s probably easiest to point back to the early 2000s, when most environmental discussions started to shift focus to solely climate change. With Al Gore and many left-of-center activists dominating the dialogue and policy proposals, conservatives were quickly cast aside.

Conservatives also refused to seek their own policy solution. They became averse to finding solutions because of the dominating force of climate discussions, and the lack of a conservative response to the issue. Without an appealing solution, they have tended to turn away from the problem. A 2014 Duke University study on climate change shows that since the early 2000s much of the conservative movement is seen as anti-environment.

Yet, if you look at an electoral map of the United States, you’ll see that most conservative-voting districts reside amidst nature. The majority of conservative voters live in rural, natural areas. They may feel alienated by the topic of climate change, but conservatives know the necessity of taking care of the land.

If you look at an electoral map of the United States, you’ll see that most conservative-voting districts reside amidst nature. The majority of conservative voters live in rural, natural areas.

Most conservatives understand how wildlife protection, water quality, and land conservation lead to a successful environment and economy. In practice, this also rings true: a recent University of Michigan study showed conservatives (and climate skeptics) were more eco-friendly in their day-to-day lives than liberals (and most climate activists).

For young conservatives like myself, appreciation for the environment arguably runs deeper than with older generations. Thanks to residing in natural areas of beauty and being a product of an education system that prioritizes environmental sustainability, we have an unmatched love for the environment.

Even more importantly, most conservatives have immense pride in our nation and the beauty that comes with it. Young conservatives are thankful for the God-given land that we were put on Earth to protect. We are not the only ones who feel thankful, but we do feel a strong appreciation for the natural beauty of our country because of our country and faith.

Members of American Conservation Coalition in action (via @BenjiBacker on Twitter)

Still, young conservatives feel left behind by the current environmental movement. Our values, which hinge on limited-government, economic success, and personal responsibility, are no longer represented within environmental discussions. We have been told those values are incompatible with a flourishing environment. Moreover, many older conservative leaders have gone silent on the issue. As a result, many young conservatives have abandoned the environment since they don’t feel they have a home.

This doesn’t have to be the case, and a growing number of young conservatives have taken the initiative to change the narrative. Our organization, the American Conservation Coalition, recruited 125 college campuses to our repertoire in just the past six months. Additionally, 42 of the 50 College Republican state chairs signed a letter this spring calling for increased prioritization on clean energy from Republican leaders.

Young conservatives are tired of the partisan bickering that consumes environmental discussions. They simply want action. With a strong history and inherent care for our environment, young conservatives want to push for policies within their value-set — instead of staying silent.

Young conservatives are tired of the partisan bickering that consumes environmental discussions. They simply want action.

So what do these solutions look like, and how can we accomplish them as a nation?

The Millennial- and Generation Z-led American Conservation Coalition has a five-point platform that embodies the future of a conservative environmental movement. Most notably, it acknowledges the importance of free enterprise and innovation in environmental discussions. Without innovation on energy sources, emissions reduction, transportation, pollution clean-up, and other important environmental issues, we’ll never solve local, national, or global environmental issues.

The best way to provide innovation is often to let the market operate in a competitive manner. We’ve seen the benefits of this in practice here in the United States, where we led the globe in emissions reduction in 2017 without a federal government policy. Innovations like Tesla, the development of clean energy, carbon capture, and corporate leadership continue to play a major role in our slowly improving environment.

Finding ways to reexamine the federal government’s role in many cases can also be effective. Take the recent string of disastrous summer forest fires. For a state like Montana that has been plagued by forest fires, the state Department of Natural Resources has been barred from helping fight the fires in the past because they’ve occurred on federal land. Montana knows about their forests better than anyone else and should have a larger stake in the forests, especially during times of disaster. What’s more, federally-owned forests are often vastly underfunded and undermanaged, whereas state-owned land is usually taken care of more thoroughly.

Similarly, the over-intrusive and ineffective Endangered Species Act (ESA) in its current version has put farmers and landowners in a tough spot. If a landowner has an endangered species on their land, the government dictates how that land is managed moving forward.

Despite being a law since the early 1980s, the ESA has only delisted 2 percent of species. Instead of an intrusive punishment for landowners, they should be given the incentives to do the right thing. Federally-owned forests and the Endangered Species Act are incredibly important in protecting our environment, but reevaluating how involved the federal government is should be a topic for discussion.

Of course, that doesn’t mean common-sense, limited, and effective government regulation isn’t part of the policy equation. In fact, nearly all Americans agree that state and federal governments have a duty to protect our nation’s environment, wildlife, and human health in one way or another.

[N]early all Americans agree that state and federal governments have a duty to protect our nation’s environment, wildlife, and human health in one way or another.

This can happen through an influx of public-private partnerships, necessary environmental safety and health safeguards, research and development, and common-sense land management practices. Our national park backlog is one of the most underappreciated environmental policy issues of our time, with over $11 billion in repairs needed as of 2018.

Despite the rhetoric in the media and on social networks, nearly all Americans agree that we need clean air, clean water, and a thriving environment. While the changing climate has important implications for us to pay attention to, young conservatives are beginning to press forward on all important environmental issues. Plastic pollution in our oceans, forest fire prevention, national park backlog, and a transition to cleaner energies are just a few of the overlooked topics that conservatives are looking to retake.

Plastic pollution in our oceans, forest fire prevention, national park backlog, and a transition to cleaner energies are just a few of the overlooked topics often that conservatives are looking to retake.

On climate, young conservatives are pushing for Republican Party leaders to take a stand for alternative reforms. Leaders like Sen. Lamar Alexander, R-TN., and Rep. Matt Gaetz, R-FL., have recently answered the call, providing separate alternatives to the Green New Deal proposed by Rep. Alexandria Ocasio-Cortez, D-N.Y. They and many other conservative leaders realize they could lose an entire generation without doing so. Of course, they need to hear from young conservatives so they will take more action on the environment.

As a nation, we must return to a bipartisan dialogue that focuses on a wide range of issues, from climate change to sportsmen’s rights, and plastic pollution to land management and wildlife. Ninety-five percent of Americans support national parks and 74 percent believe the environment should be protected at nearly all costs. Yet they assume the environment is a partisan issue.

Bipartisan actions will occur when older conservatives are willing to focus on an issue that isn’t a top priority for them, and when liberals are willing to work with the “opposing side.” Most of all, it will take young conservative leadership and action. Through the American Conservation Coalition and countless other simultaneous movements, we can finally make the environment a bipartisan issue again. 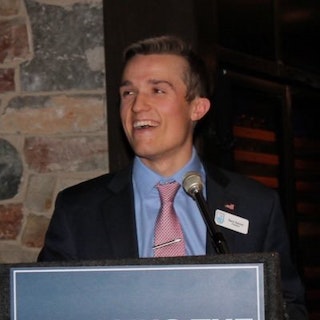