Universities Can – and Should – Strengthen the Common Good

Interview with Mitch Daniels, President of Purdue University and the former Governor of Indiana

Mitch Daniels, President of Purdue University and the former Governor of Indiana, explains how universities can promote the common good by being bastions of free speech, exemplifying democratic behaviors, and preparing students with civics education as well as practical skills.

Mitch Daniels serves as President of Purdue University, a post the Indianan has held since 2013 and from which he will step down at the end of 2022. During his tenure, Purdue has kept tuition frozen under $10,000, launched Purdue Global, an online degree program, and embraced free speech on campus.

A former two-term Governor of Indiana and Director of the Office of Management and Budget under President George W. Bush, Daniels participated in the George W. Bush Institute’s Forum on Leadership in April. He spoke then with Catalyst Editor William McKenzie and Catalyst Editorial Assistant Peyton Webb about how universities can create a greater common good. Below is their conversation, which has been edited for length and clarity.

How do you think universities can be involved in helping break through the tribalism that we see in society in general and on university campuses in particular? For example, how might universities engage students with others who may not share their views?

They could stop making it worse by fostering the notion that people on campuses and the graduates of those campuses are somehow superior, entitled to make decisions for others, possess a deeper wisdom, or have a superior moral code. There’s just way too much homogeneity of views on too many campuses today. Those are the very places that can best foster a free competition and expression of ideas, but they too often model the opposite. Any class that leaves a university like that has missed an opportunity to absorb and practice the arts of citizenship.

There’s just way too much homogeneity of views on too many campuses today. Those are the very places that can best foster a free competition and expression of ideas, but they too often model the opposite. 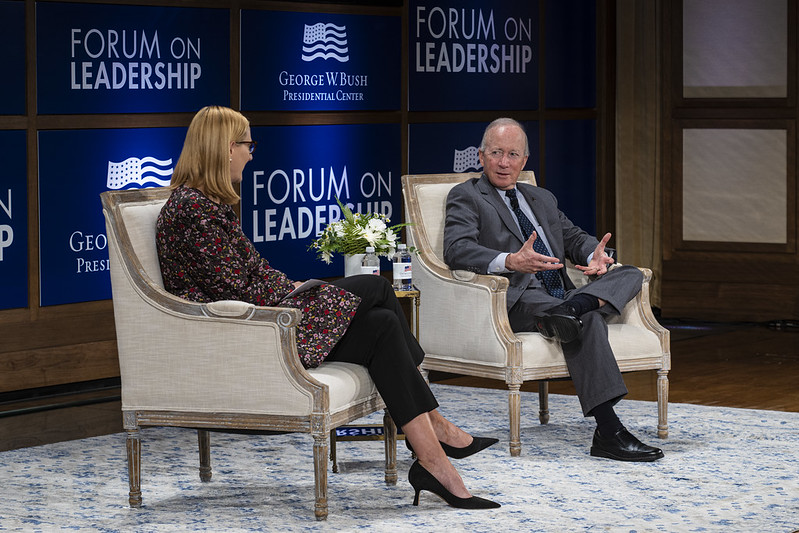 How vital is America’s voice to advance freedom and prosperity at home and around the world? Mitch Daniels, President of Purdue University and former Governor of Indiana, answers these questions at the Bush Center’s 2022 Forum on Leadership.

As early as orientation, Purdue implements civics education and offers students a civics certificate. How does that work? How did it come about?

Both those things were enacted by our board of trustees at my suggestion. It started by our articulating a free speech policy that was, I believe, as clear as it needs to be and as clear as any in higher ed. And I believe we are living up to it.

We may take exception with or even condemn certain kinds of speech, but we don’t punish speech, only conduct. We make sure to acquaint our students with that policy and the reasons for it. That starts before their first day of class. And, by the way, that model has been copied by a number of schools. I hope this idea spreads once again.

As to civics, it’s been lamented for a very long time how little Americans know about the history and philosophic underpinning of our free institutions. And it’s not just college students. It’s the adult population, too. If they weren’t so sad, some of the findings would be comical. You know, people think Judge Judy is on the Supreme Court, things like that.

In cooperation with willing faculty, we’ve worked out three pathways a student can take prior to taking the civics exam. The exam is not time-consuming, it’s not proving real difficult, and most people are passing it on the first attempt.

The pathway has other modest requirements, such as attending at least six qualified public affairs events, that must be fulfilled within four years. I want people to know that Purdue graduates are civics certified in addition to being well prepared academically. We’re not just there to prepare great workers and economically productive graduates. We’re there to prepare citizens. Too often, that’s not happening in higher education today.

You wrote in the Washington Post that universities should be exemplars of democratic behaviors and values. Beyond civics, what should that look like?

Universities should be places where debate is not only protected but promoted. I praised in that column a book by a colleague at Johns Hopkins. He suggests, for example, the revival of debating societies to promote debate in ways that involves students or at least allows them to witness the peaceful contest of ideas and the peaceful resolution of differences.

I think he’s right. We want to send out people who not only can build a bridge that won’t fall down, but who also can debate with their fellow citizens whether that bridge is the right investment for this year’s budget.

You’ve held tuition costs steady at Purdue since 2013 and created innovations like Purdue Global. How else can universities best create economic opportunities for students and add value to their college experience overall?

Universities can work closely with businesses in the private sector. This happens now but they need to do so even more closely. Higher ed will need to be even more experiential.

We want to send out people who not only can build a bridge that won’t fall down, but who also can debate with their fellow citizens whether that bridge is the right investment for this year’s budget.

We’ve had a co-op program at Purdue for about 65 years. It’s not new, but we need to do much more of this and be imaginative about it. Students, for example, can work for a semester without losing ground academically because they can use online courseware.

We also offer Purdue Global, which allows adult students to earn degrees online. For a reasonable investment like that, universities can deliver a strong return in terms of people earning their first degree or a certificate in a necessary skill.

Is freezing tuition and creating different programs like Purdue Global applicable to both public and private universities?

Emphasizing value, including trying to make certain that the price is affordable, is a job for everyone from schools of all kinds. When we started what has now become this long string of years of restraint, I thought that if we didn’t contain costs, we’d be forced to do it by the marketplace or, in our case as a state university, maybe by public authorities.

I was wrong about that, or at least I was premature. But you’re seeing now some real resistance. COVID probably had something to do with it, but what had been a gradual diminution of support for higher-ed as essential or worth its cost took a big step downward over the past year or two. That’s dangerous.

We’ve probably overemphasized the bachelor’s degree for some time. But some kind of post-secondary education is pretty much essential. We need to get better as a nation at teaching skills in other ways than a four-year residential experience. That traditional path is right for some young people, but it is clearly not the best course for all.

Drawing some here from your days as governor, how do we get states to talk about education as not only K-12, but pre-K through some sort of post-secondary credential?

I hear a lot of that now and, up to a point, I agree with it. Some of it is self-interested in that people just want to create more jobs, income, and union dues. But I’m especially interested in the post-secondary part, as we just discussed. A high school diploma was a great start in life decades ago. It’s just a first step now.

Now it’s about helping individuals choose that right second step and take it. For some that might be a skilled trade, for others that might be an apprenticeship or a credential in a specific skill like coding, or it could be a comprehensive college degree.

We need to get better as a nation at teaching skills in other ways than a four-year residential experience. That traditional path is right for some young people, but it is clearly not the best course for all.

This is a huge opportunity if we can get it right.

I know less about and I’m less certain of the right answer for pre-K. We have made full-day kindergarten universal in our state, which was a big investment for Indiana. But the data on pre-K is still pretty murky. If done really well and for the right children? Absolutely. But spread across everybody as a requirement? I’m less sure. We want to be careful there. We need to be a little more selective and surgical. 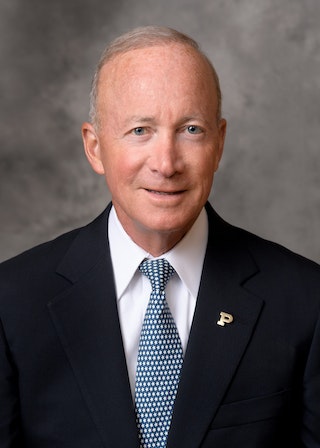