Interview with David Brown, Leadership Fellow at the Bush Institute and Superintendent of the Chicago Police Department

Chicago’s Superintendent of Police, David Brown, considers listening and collaboration as must-haves in breaking through community conflicts. They also matter as the nation faces an epidemic of gun violence and a renewed struggle against racial discrimination.

David Brownserves as the head of the Chicago police force, a position that the Dallas native previously held as the leader of the Dallas Police Department from 2010 until 2016. Before those top posts, the graduate of Dallas Baptist University and Amberton University served 33 years on Dallas’ police force. During his time on that force, he lost both a son and a partner to gun violence.

Brown, a Leadership Fellow at the George W. Bush Institute, drew upon his experiences in describing how communities can create common ground in tense, difficult situations. To Brown, the process starts with listening to others. He contends that serving others is a privilege and that finding common ground is central to serving others. In police work, he tells The Catalyst, creating common ground is imperative after George Floyd’s murder in 2020 and the prevalence of gun violence across America.

You have now been the chief in two cities, both with their own tensions. What would you say to leaders in other cities and fields about finding common ground in difficult situations?

Always be mindful that it’s a privilege to serve and that there is no personal egotistical way to serve people. You have to put others before yourself.

Finding common ground also is essential in serving people. That involves navigating the many opinions and attitudes that make up the interests of stakeholders.

In policing, you obviously want to serve in ways that protect people, that delivers real declines in crime, and that particularly confronts gun violence in this moment in our country. We’re seeing an epidemic in gun violence. And people just don’t feel safe. Regardless of what statistical declines you may be able to convey, you also have to address a person’s perceptions.

Finding common ground also is essential in serving people. That involves navigating the many opinions and attitudes that make up the interests of stakeholders.

What has worked in Dallas or Chicago, or maybe both, to find common ground between police officers and communities who feel that they’ve been discriminated against?

I’ve made it a point to listen more than I talk. That’s the top thing I’m trying in every meeting, in every interaction. I’ll say a few things, but only to prompt a person to talk more to me about their concerns and the real issues around trust. The broken trust in policing is going to be on police given the George Floyd videotape, so we certainly have to have a listening ear. More importantly, we then need to take what we’ve heard and do something about it.

Even if it’s not delivering on all of it, deliver on some of the things you’ve heard from people, particularly in Black and brown communities. Talk is cheap. Listening doesn’t do much if people on the ground don’t  see it coming to fruition. I try to deliver on the things I hear to convey that I want to work hard for your trust. Law enforcement’s broken some trust, but I’m trying to make the case that it’s not the whole, that there are really good people in this profession.

The broken trust in policing is going to be on police given the George Floyd videotape, so we certainly have to have a listening ear. More importantly, we then need to take what we’ve  heard and do something about it.

Some people won’t be convinced, but we’re going to keep trying.

What strategies work in reducing violent confrontations, to put that action into practice?

Most cops want to do their thing without people telling them what to do. But that’s why I remind myself that it’s a privilege to serve, and that needs to come first. Our default in this profession is to do what’s tried and true, not to listen or act on what we hear.

How do you as a chief try to listen to people? And similarly, how can officers best do that?

I do small group meetings in the community, oftentimes one-on-one, which will make your calendar look like a disaster. This requires investing in people, giving them time, eating meals with them.

It’s the same for officers: Sit in small groups, do a lot of one-in-one meetings, and listen. It’s hard to hear people complain about your shortcomings.

But then I like to ask them, “Okay, now tell me something positive we did. I know we did one thing. Tell me one thing that you think we did that was right.” We both chuckle at that, just like you’re chuckling now. When we get that right thing, we build on it. “Okay, what else can we do right?” I try to put that twist in these conversations to lighten the moment.

How do you, as well as chiefs around the country, encourage officers to do this? Is that something that needs to be built into training? Is that learned on the job?

Modeling by example is key. Officers have to see you doing this. We video me doing this in the community as the leader of the organization.

Sometimes I give some projects and assignments to people in the organization to go out and model that behavior. Then, come back and give me feedback on how that went.

The short answer is you do this by example.

How has George Floyd’s murder changed the imperative for you and your officers to build trust as well as the difficulty of breaking through with people?

It’s been quite a pendulum swing. I’m asking for more funding this year. Two years ago, that request would have been met with a thumbs down. I would have said then, don’t even crack the door and talk about more funding for police.

Today, the pendulum has swung back externally, but there are some hurt feelings on both sides of this discussion about George Floyd. The defund-the-police movement did a lot of damage to young people’s inclinations to be in public service. A lot of damage. Not many young people want to go into law enforcement or other public service jobs. We’ve got some uphill work to do to convince them because of the all-cops-are-racist movement.

On the other hand, over the last six-to-eight months we’ve seen the pendulum swing back to more moderate discussions about policing, especially in Black and brown communities. I’ve heard much more moderation around this issue. The hurt feelings will take time for people to fully heal and appreciate the sacrifice officers make. We’ve had more officers shot at or shot in our city these last two-and-a-half years than we ever had on record.

There is not only a real difficulty to this job but a real danger. Officers need to hear a little bit more appreciation to continue putting themselves in danger. Then, they can inspire others to want to do it.

So, the pendulum is swinging. I hope it stays moderate, but I’m not sure what society is doing right now.

Let me flip this around and ask, what should communities themselves do to build greater trust with police departments? What needs to happen from the community’s end?

In our current times, communities cannot be spectators in public safety. We clearly see a significant challenge around gun violence, and it’s going to take all of us working together to dig ourselves out of this. It’s got to be the whole neighborhood organized around public safety. With technology now, there’s significant things neighborhoods can do to help police protect the community.

In our current times, communities cannot be spectators in public safety. We clearly see a significant challenge around gun violence, and it’s going to take all of us working together to dig yourself out of this.

For the business community, they can help with our limited budgets. Budgets for police are basically personnel cost. Anything extra always gets cut in the budget. Business communities, particularly philanthropic organizations, can enhance public safety by investing in initiatives that police department budgets and our community neighborhood block clubs cannot fund. That would help keep communities safe.

After a gunman killed five police officers in the streets of Dallas in July 2016, you said that, in effect, police can’t be stepping in where mental health or other social services are needed. Fast forward to today, what should communities do to better address their own problems so solving them doesn’t all fall on the police?

There’s evidence today that public safety is akin to public health. The pandemic has taught us that some personal conflicts that lead to violence, such as a person in a psychotic episode, are attributable to public health inequities. Look at the suicide rates we’re seeing in our young people. They are on a track to surpass levels that we haven’t seen before. We still need to lockup violent offenders, but much of what we’re seeing with gun violence is likely attributable to mental health issues and addiction problems.

Families are distraught because they do not know where to turn when a young person living with them is acting out. They don’t know what to do about it, so they call police. In many instances, we don’t have the mental health expertise to diagnose people. Sometimes, these cases play themselves out with violence.

Communities are dealing with public health and social service dynamics, but law enforcement can be a partner with them in advocating for adequate funding to meet those needs. Right now, I would say the funding is upside down to the need, but I’m encouraged. The new gun bill contains significant mental health funding.

You are in the business of dealing with intractable problems. What would you say to leaders in other fields about overcoming some of our differences? You mentioned listening, for example. What else would you put in that basket?

Law enforcement can learn quite a bit from the private sector about investing in people. The private sector’s doing a really good job investing in their personnel. They may be doing so for survival reasons related to the pandemic and the economy. Think about the restaurant industry, the retail industry, downtown office personnel working from home. All those things are changing private-sector businesses, and businesses are adapting to the needs of people that work for them. It’s not just performance plans, grading somebody on how well they’re doing. It’s attending to the needs of people, just the basic needs of people.

Instead of thinking how do I win, think about how we make sure our democracy wins. That is another way to think about where we are now as a country.

How employees work together impacts business’ bottom lines. Employees will have different political persuasions, yet they work together for the next quarter’s profits. 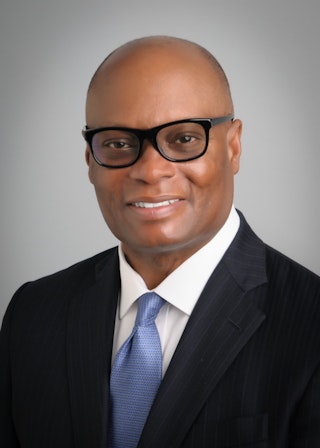