Trade as a Pathway to Peace

An essay by Hiroki Takeuchi, Director of the Sun and Star Program on Japan and East Asia at SMU's Tower Center for Public Policy and International Affairs

Trade partnerships and economic interdependence are traditionally thought to lead to overall cooperation: Countries don’t go to war with each other when they need each other.  But China’s shifting economic models — and COVID-19 — have complicated its relationship with the U.S.

Could trade bring peace and stability to international relations?  The question of how trade affects security has long been salient in debates over international conflict and cooperation.  The traditional views of commercial liberalism often build their arguments by taking the following simple assumption: Nations will not fight war if they trade each other, because no nation is interested in fighting war with another nation with which it trades.

David Ricardo’s idea of a “comparative advantage” underlies commercial liberal theories about pacifying effects of economic interdependence, suggesting that the comparative advantage leads to the division of labor, leading to shared benefits that bring peace to bilateral relations.

Political scientist Patrick McDonald in The Invisible Hand of Peace: Capitalism, The War Machine, and International Relations Theory refines the commercial liberal theories, suggesting that the liberal domestic economic institutions, such as secured property rights and competitive market structures, prevent the government from waging costly war to satisfy influential domestic actors who see war as beneficial and who expect to pay few or none of its costs.

He argues that free trade policy (not the trade volume) brings peace because market-promoting institutions have pacifist effects on the government’s foreign policymaking.

Competitive domestic markets in the state with lower trade barriers would enable the government to realize economic gains from trade in a peaceful international environment.  Property rights regimes provide credible limits on the state’s power over individual citizens and change the distribution of power between a government and its citizenry in domestic politics.  As a result, the scope for positive-sum, mutually beneficial cooperation is realized in the state with smaller public sectors.

Interestingly, McDonald finds that growing trade between two powers is stabilizing as long as both are committed to market liberalization, and that, when that is not the case, growing trade can actually be destabilizing.

This finding is alarming in the context of U.S.-China relations now that the United States and China have both turned to economic nationalism.  Xi Jinping originally advocated greater market reform to diminish the role of state-owned enterprises (SOEs) when his administration started in 2013.

Having observed that China had maintained rapid economic growth since 1978 primarily because of private firms, he had a good reason to expand the private sector and shrink the state’s role in the economy.  However, his SOE reform has made no progress and has instead intensified the role of the Chinese Communist Party (CCP) in the decision-making of SOEs.

This finding is alarming in the context of U.S.-China relations now that the United States and China have both turned to economic nationalism.

The SOE reform has stalled because it would undermine the vested interests of the rent-seeking scheme that thrives under the state-capitalist system.  The Tiananmen democratization movement in 1989 reminded Deng Xiaoping that a market economy would lead to increasing popular demands for democratization.  In the 1990s, President Jiang Zemin employed the cooptation strategy, encouraging former officials and former SOE managers to start businesses by using their political connections, and this strategy prevented the market economy from threatening China’s one-party rule.

Those who benefit from the state capitalist system do not want to see the SOE reform that would diminish the benefit of the revolving door built between the CCP and SOEs.  Since the 1990s, the CCP has used the state capitalist system to maintain popular support for one-party rule by distributing economic rents. However, the CCP is facing the dilemma that real economic reform, which would undermine the vested interests based on the rent-seeking scheme, will be necessary to achieve sustainable economic growth. 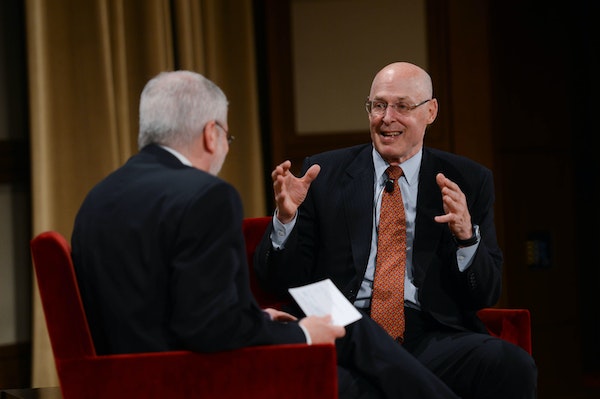 Former Secretary of the Treasury Hank Paulson discusses trade and China’s economy during a visit to the Bush Center.
Read article

Considering the pacifist preference of reformists, the United States should encourage the Xi administration to commit to SOE reform, which would benefit both China and the United States. The Trump administration has pressured China to advance the SOE reform but in a counter-productive way.  The hardline stance taken in Trump’s trade war has empowered the anti-reformist nationalists vis-à-vis the reformist internationalists, making it less likely for China to implement SOE reform.

COVID-19 threatens both the U.S. economy and Chinese economy because both economies are connected to each other and to the global economy through trade and foreign direct investment based on global value chains.  China has shown its intention to replace the United States as the leader of the global economy, a role the United States has played since the conclusion of World War II.  For example, Xi gave a clear statement opposing protectionism in the 2017 World Economic Forum in Davos.  However, for China to lead the global economy, it first must commit to SOE reform and Xi must face the backlash from anti-reformist nationalists.

Although China is eager to expand its influence in the Asia-Pacific region and the world, it is not clear whether China’s rise is appreciated.  The outsized presence of SOEs in Chinese overseas investment has provoked concerns in host countries.

COVID-19 threatens both the U.S. economy and Chinese economy because both economies are connected to each other and to the global economy through trade and foreign direct investment based on global value chains.