An essay by Lindsay Lloyd, the Bradford M. Freeman Director of the Human Freedom Initiative at the Bush Institute

China's recent legislation aimed at Hong Kong is only the latest in a series actions that restrict the freedom of its people.

Pro-democracy lawmakers speak to members of the media after being forced to resign November 12, 2020 in Hong Kong. (Anthony Kwan/Getty Images)

In mid-November, China drove yet another nail into the coffin of Hong Kong’s autonomy.  Beijing demanded the expulsion of four members of the Legislative Council for their heresy of supporting democratic reform.  This latest move was a blow to freedom in the beleaguered city, but also another sign that the “One Country, Two Systems” policy proclaimed in the 1970s was no more.

In the late 1970s, China was just beginning to emerge from decades of isolation.  After the death of Mao Zedong in 1976, the worst excesses of the Cultural Revolution, in which millions lost their lives, were largely over.  The Carter Administration initiated full diplomatic relations with China in 1979, building on Richard Nixon’s opening to China in 1972.

China watchers viewed this as a hopeful time.  Deng Xiaoping, who ascended to power in 1978, was seen as a modernizer and a pragmatist.  Under his command, China began a slow pivot toward a freer market.  While the state retained wsidespread influence in the economy, the gradual shift away from socialism gained speed and helped lift millions out of poverty.

In contrast, political reforms were largely off the table.  While some modest experiments were allowed in increasing competition in village elections and slightly greater freedom for religious practice, the Chinese Communist Party (CCP) maintained its iron grip on the nation.

As China’s economic rise gathered steam, so too did a resurgent Chinese nationalism.  The centuries-old wounds of Chinese suffering from unequal treaties at the hands of other powers were kept fresh in the minds of the Chinese state and its people.  Beijing’s ultimate goal was to restore its control over three historically Chinese territories — Taiwan, Macau, and Hong Kong.

As China’s economic rise gathered steam, so too did a resurgent Chinese nationalism.

Since the 1949 defeat of the Nationalists by the Communists in the Chinese Revolution, Taiwan achieved a de facto independence.  While no longer formally recognized by the United States or other major powers, Taiwan began to liberalize in the 1970s and 1980s.  An economic boom led to pressure on the autocratic government to democratize.  With greater freedom came an increasing rejection of Taipei’s claim to be the legitimate government of all of China and pro-independence sentiments.  Ties have expanded between Taiwan and the mainland, but the vast majority of Taiwanese oppose closer integration.

China also sought to end the colonial status of the Portuguese-ruled Macau and British-ruled Hong Kong.  The smaller enclave of Macau had been a Portuguese trading post since the 1500s and formally under Portuguese rule since the late 1800s.  In recent decades, much of its economy revolved around gambling.  Unlike in Hong Kong, there was little tradition of activism or civic engagement.  Portugal sought for years to return Macau to Chinese control, but Beijing showed little interest.

Hong Kong, in contrast, was a global economic powerhouse.  While Britain never allowed the city to govern itself democratically, Hong Kong enjoyed broad personal and political freedoms.  Capitalism flourished under an independent judicial system and the rule of law.  Hong Kongers were largely free to speak their minds, to worship as they pleased, to assemble, organize, and travel.  A vigorous and competitive press provided a measure of accountability on the authorities.

Hong Kong, in contrast, was a global economic powerhouse. ...  Capitalism flourished under an independent judicial system and the rule of law.  Hong Kongers were largely free to speak their minds, to worship as they pleased, to assemble, organize, and travel.

Even as Hong Kong thrived, its future was in doubt.  While a small core of Hong Kong had been ceded by China to Britain, the New Territories — comprising 86 percent of the colony’s territory — was leased for a term of 99 years in 1898.  As the 1997 expiration of the lease neared, the British government lacked the will or the power to maintain its toehold.  It was obvious that Hong Kong was unviable without the New Territories.  It was equally obvious that China had no intention of prolonging the British presence in what it viewed as its territory.

As Deng Xiaoping assumed power in 1978, he vowed to pursue reunification with Taiwan.  While never renouncing the possibility of using force, the pragmatic Deng articulated a new approach – One Country, Two Systems.  Taiwan (and by extension, Macau and Hong Kong) could reunite with the mainland.  Provided they acknowledged Beijing’s ultimate authority, they would be allowed significant autonomy in their political, economic, and social systems and even in some aspects of foreign affairs.  While Deng’s policy was of little interest to Taiwan, it became a key element in the negotiations and agreements to return Macau and Hong Kong to Chinese control in the 1980s.

The Sino-British Joint Declaration of 1984 culminated in the transfer of Hong Kong in 1997.  Similarly, the Joint Declaration on the Question of Macau of 1987 transferred control of the Portuguese territory to China in 1999.  Both treaties were similar.  Both pledged significant political autonomy and no changes to the political, economic, and social freedoms enjoyed by citizens of Hong Kong and Macau for 50 years.  The territories would retain their independent currencies and trade relations.

Slowly at first, but later with increasing speed, China has reneged on the spirit and the letter of its agreements.  While superficially much may seem the same in what is now a Special Administrative Region of China, the reality is that Beijing is extinguishing the freedoms and qualities that long made Hong Kong unique.

In the more than two decades since the handover, China has chipped away at its promise to respect the city’s autonomy and way of life.  While Hong Kong’s free market and some freedoms like religion and movement have been largely left alone, the CCP has worked to constrain political freedoms like the ability for Hong Kongers to choose their leaders and the freedoms of assembly, association, and speech.

In the more than two decades since the handover, China has chipped away at its promise to respect the city’s autonomy and way of life.

In 2003, the Hong Kong Hong Kong government proposed legislation to institute new national security provisions to penalize acts of disloyalty to the Chinese government.  Large demonstrations compelled the temporary withdrawal of the law.

Since the handover, democratic activists have pushed unsuccessfully for democratic reforms.  Their demands for universal suffrage and democratic elections have been stymied time and again by Beijing.

The Umbrella Movement, encompassing several months of protests in 2014, arose after Beijing declared that candidates for the chief executive position, the most senior official in the Hong Kong government, must be approved by the central government.  The protests led to the government backing down for the moment.

Citizens show support of the Umbrella Movement in the Mong Kok district of Hong Kong in October 2014. (Scott Wong / Shutterstock)

Free speech issues have been a persistent problem.  Beginning in the mid-2010s, there were several cases where the Chinese government attempted to abduct Hong Kong citizens, notably including people working in bookshops, which sold publications critical of the central government.  In 2012, the Hong Kong government proposed implementing new pro-Beijing guidelines for education, under the banner of “Moral and National Education.”  Hong Kong was directed to implement laws banning disrespect for the Chinese national anthem and national symbols such as the flag.

In 2019, the government drafted a new extradition law, to allow the transfer of accused criminals to the mainland for prosecution.  Again, Hong Kongers rose up in massive protests.  While initially peaceful, over time, some of the demonstrations devolved into riots and were met with a violent response from the police.  The ongoing turmoil — coupled with the effects of the COVID-19 pandemic — led to further repression and extracted a heavy toll on Hong Kong’s economy.

Police use water cannons against Hong Kong protesters in gas masks during a clash in September 2019. (Isaac Yeung / Shutterstock)

In an interview for the Bush Institute’s Democracy Talks series earlier this year, democratic activist and student leader Joshua Wong said, “We are all aware how Beijing ignores the promise of one country, two systems in the Sino-British Joint Declaration. And since the protests in the summer of 2019 until now, almost 10,000 Hong Kongers have been arrested during the protest movement. In a city of seven million people, this ratio is extremely high.” 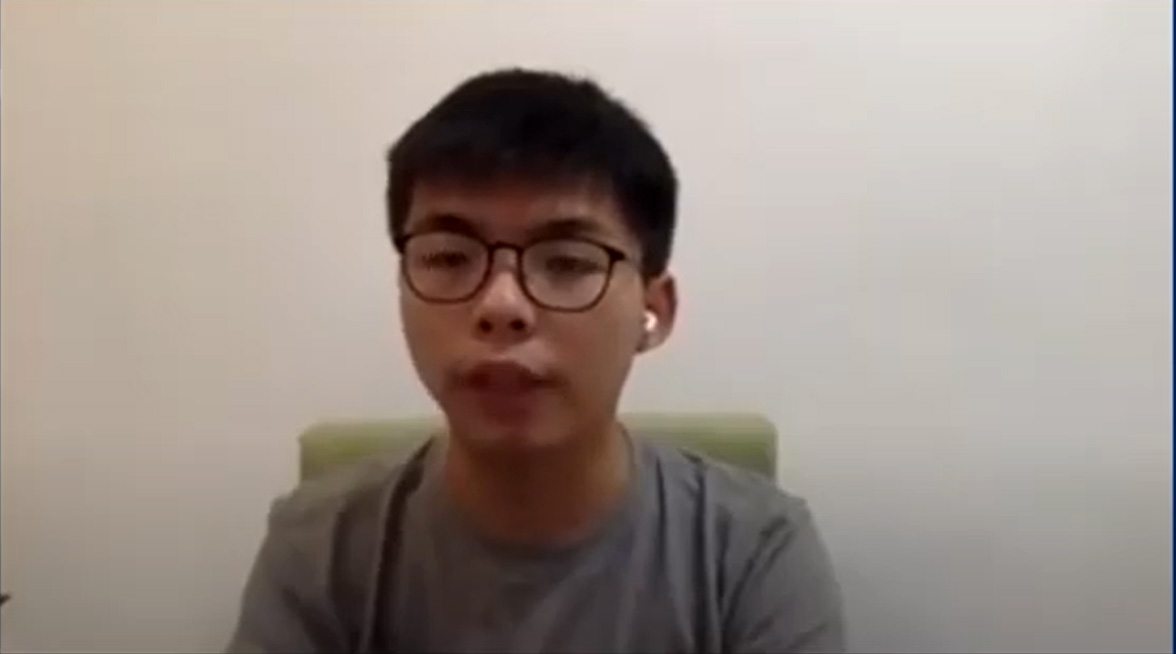 But despite the protests, the CCP persisted and earlier this year, Beijing imposed its draconian new National Security Law, sharply limiting some of Hong Kong’s most cherished freedoms of speech and assembly.  The sweeping scope of the new law has dampened, but not eliminated dissent.

Prominent political and business leaders have been investigated and detained.  The government has interceded to modify school curricula, barring instruction on topics deemed sensitive by the central government, such as the 1989 massacre at Tiananmen Square.  Hong Kong’s previously robust media has been tamed, with self-censorship becoming more common.  In response, the United States and other democracies have begun ending Hong Kong’s special international status, moving toward treating the city much like the rest of China, which it sadly now is.

These actions and others are fundamentally at odds with the principles of One Country, Two Systems.  Despite broad public dissatisfaction and international condemnation, Beijing continues its campaign to bend Hong Kong to its will.  Indeed, the central government makes little pretense that its agreement to maintain the city’s autonomy were more than meaningless words on paper.

These actions and others are fundamentally at odds with the principles of One Country, Two Systems.  Despite broad public dissatisfaction and international condemnation, Beijing continues its campaign to bend Hong Kong to its will.

As a spokesman for the Foreign Ministry said, “Now Hong Kong has returned to the motherland’s embrace for 20 years, the Sino-British Joint Declaration, as a historical document, no longer has any practical significance, and it is not at all binding for the central government’s management over Hong Kong.”

There is little chance that a distracted and largely disinterested international community can slow, let alone reverse the CCP’s goal of breaking Hong Kong’s economy.  Opprobrium over China’s treatment of Tibet, its former one-child policy, or the ongoing horrors again the Uighur population are dismissed as interference in China’s internal affairs.

Many Hong Kongers see the writing on the wall and are attempting to leave or obtain a foreign passport to provide an escape route as conditions worsen.  Others, like student activist Joshua Wong, say they will remain: “Even if Hong Kong is not Hong Kong anymore, the spirit of Hong Kongers is still alive. We are trying to resist creatively and in an alternative way.”

While there may be few practical steps the United States can take to influence the future of Hong Kong, its fate should serve as a warning.  China’s word means little when it comes to its perceived national interests.