An Essay by Carroll Doherty, Director of Political Research at the Pew Research Center

The Pew Research Center asked Americans how they feel about and define "socialism" and "capitalism" — with insightful results.

A construction worker campaigns to increase the number of middle-class construction jobs for residents in the Bronx on October 2, 2019. (Erik McGregor/LightRocket via Getty Images)

In an unlikely turn, socialism has become part of the 2020 presidential campaign. Democratic candidate Bernie Sanders has reiterated the case for “democratic socialism,” while President Trump has said a vote for any Democrat next year is a vote for “radical socialism.”

But how do Americans feel about socialism and how do they define it? The answers are revealing – and underscore the uncertainty many have with this term.

Earlier this year, 55 percent of the public said they had a negative impression of “socialism” while 42 percent expressed a positive view, according to a survey by Pew Research Center. Far more Americans – 65 percent – had a positive view of “capitalism.” 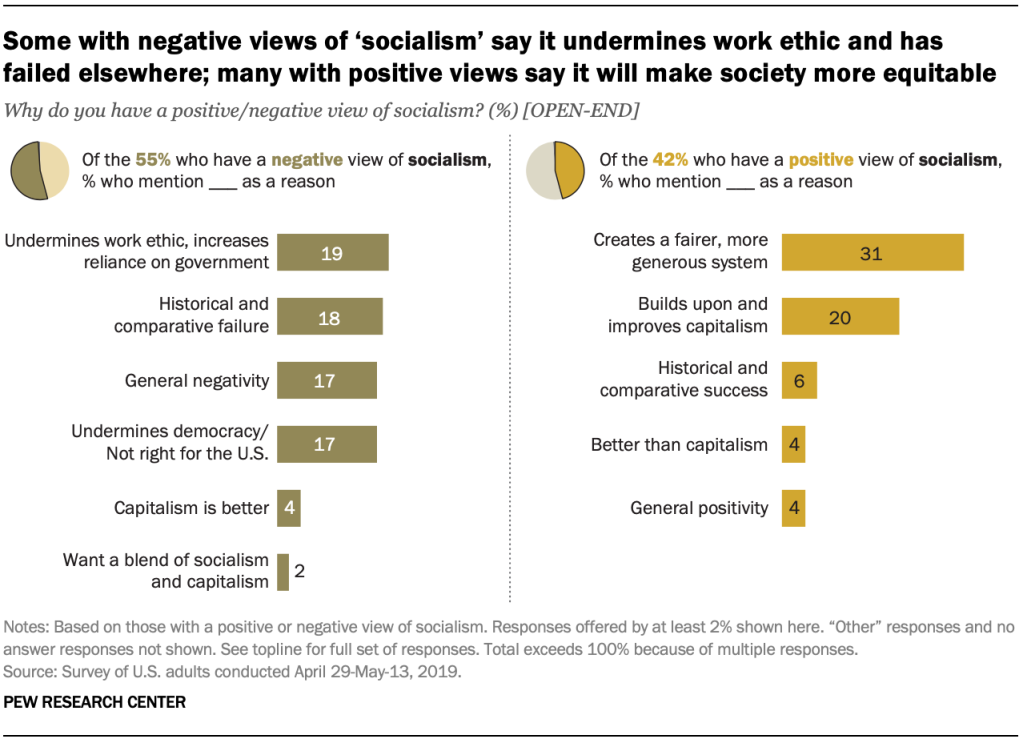 There were significant generational differences in these opinions. Millennials – adults born between 1981 and 1996 – are the only generation in which a majority did not view socialism negatively. Half of Millennials 50 percent viewed socialism positively, while 47 percent had a negative opinion. Among older generations, majorities of 55 percent or more had a negative impression of socialism.

But when we asked people to describe in their own words why they had a positive or negative view of socialism and capitalism, the answers did not vary much across generations.

Earlier this year, 55 percent of the public said they had a negative impression of “socialism” while 42 percent expressed a positive view, according to a survey by Pew Research Center. Far more Americans – 65 percent – had a positive view of “capitalism.”

Roughly a third of adults who viewed socialism positively focused on the potential for a more equitable economic system, including an expanded government safety net. “Socialism is not without its flaws,” said one 35-year-old man. “But at least its stated goal is to provide for everyone who contributes.” Others asserted that socialist nations, especially those in Europe, care for their populations better than the U.S. Just 2 percent of those with a positive view of socialism specifically mentioned “democratic socialism.”

Those who had negative impressions of socialism most often said that it would undermine people’s initiative or work ethic. A 53-year-old man said socialism “kills incentives for people to innovate and climb the ladder for success.”  Others said socialism had failed historically or in other countries or said it would undermine democracy in the United States. As with the factors behind positive views of socialism, there were only modest generational differences in these opinions.

Majorities across all four generational cohorts were positive about capitalism, but Millennials were less likely than older adults to view it favorably. Among members of the Silent Generation (those ages 74 to 91), 79 percent were positive toward capitalism; that compares with 70 percent of Boomers, 67 percent of Gen Xers and 55 percent of Millennials. 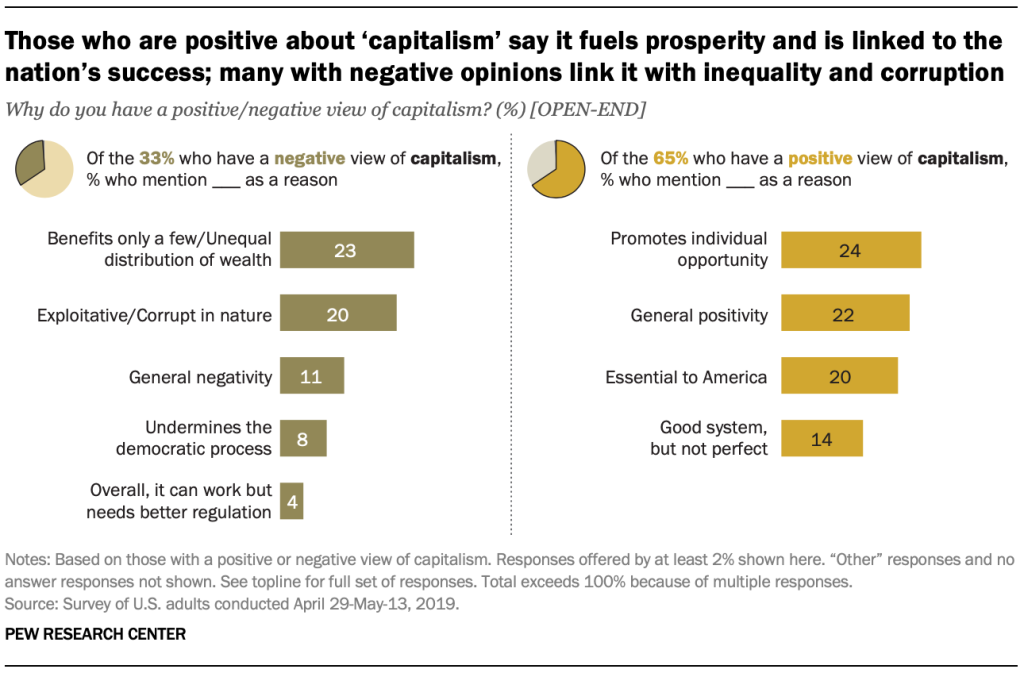 To some extent, the factors behind positive views of capitalism are the flip side of the reasons behind negative opinions of socialism. Nearly a quarter of this group cited the way that capitalism allows for individual opportunity and discourages laziness. Almost as many said, in effect, that capitalism is America: It is the basis for nation’s economic strength and freedom in the U.S. “It’s what this country was founded on,” said a 31-year-old woman.

And a sizable minority of people who had a positive view of capitalism identified what they said were its flaws, raising concerns about corruption and inequality. “Capitalism is the worst way to set up a society, except for all the other ways,” said a 44-year-old man.

While political leaders in both parties paint the differences between socialism and capitalism in black-and-white terms, many Americans are inclined to view the question in shades of gray. Republicans stand out for their positive impressions of capitalism and negative views of socialism; a 68 percent majority of Republicans hold this combination of opinions. But most other Americans – particularly Millennials – do not view socialism and capitalism in zero-sum terms.

Millennials have long been more likely than older adults to support an expanded government social safety net and to rate economic inequality as a major problem in the U.S. Last year, 69 percent of Millennials said the nation’s economic system “unfairly favors powerful interests” – the highest share of any generation.

Yet this does not mean that most Millennials are ready to embrace socialism and abandon capitalism. Socialism may be “having a moment in America right now,” as an article in the New York Times recently put it. But the data suggest that Millennials are not clamoring for socialism. Instead, what they mostly want is an economy that works better – and more fairly – for them.

But the data suggest that Millennials are not clamoring for socialism. Instead, what they mostly want is an economy that works better – and more fairly – for them. 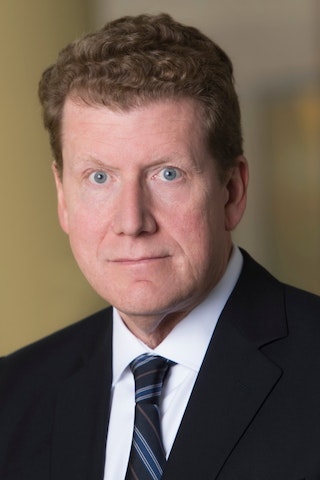